The exponential growth of urbanization (human presence, land use intensification and diversification, not well organized cities) forces urban settlements to be highly exposed to direct and indirect effects of natural hazards.

The replacement of high exposed urban functions with lower exposed ones (Functional change) allows more economic, technical and social sustainable interventions in both developing and already industrialized countries. In dense urban settlements, the presence of historical and cultural heritage and identity-making elements make people reluctant to accept deep changes and, in addition, the local territorial context with its limited availability of soil does not allow areal relocation in lower risk areas.

To reach a resilient urban management and gain citizens’ acceptance of new policies, cities must be flexible, able to adapt their functions, main structure and the internal processes to external (and internal) stressful situations through the definition of new structures and relationships (physical and social) among elements. The higher the urban system flexibility, the greater the capacity to answer in a short time to stresses and then to find a new dynamic balance (De Lotto, 2011).

The intended main aim can be achieved with active participation of private owners and every citizen (bottom-up advanced strategies instead of top-down and post event managing and planning that it is not able to satisfy the continuously changing needs of population): tactical and ethero-organized planning actions, including purposeful ideas from citizens and public administration’s support to participation (Godschalk, 2003).

In the proposal, authors define a general method that aims to reduce natural risks in an urban settlement:

The increase and concentration of population in areas subject to potentially dangerous natural phenomena intensify the potential of these damaging phenomena that, then, assume the proportions of disasters and catastrophes. 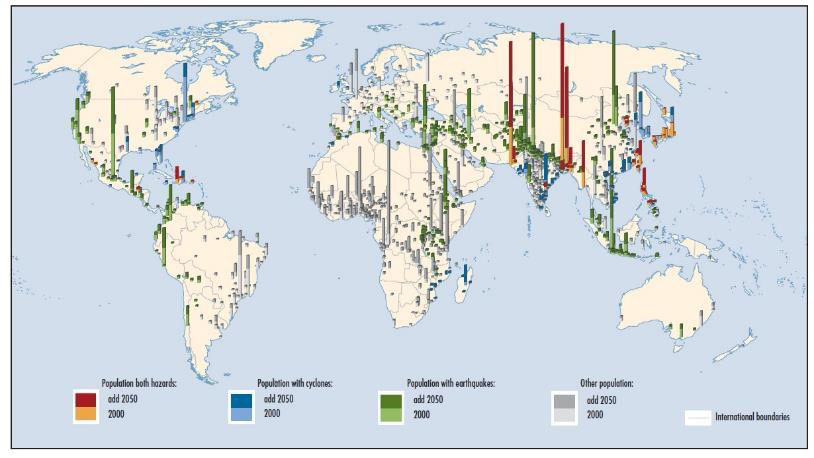 There is no doubt that, with time, the effects of natural hazards change due to changes in land use patterns.

Given that, in an urban area, people are the most exposed elements to risks, the evaluation of the different urban functions exposure (residential and commercial areas, tertiary, industry, strategic services, roads, railway system, social and economic infrastructure) becomes essential.

To achieve this objective, it is essential to study the localization and distribution in time and space of the population (throughout day and year, whose characteristics and behavior characterize it as an entity dynamic and not static), the different urban functions, human activities and goods in order to know the real number of people who may be affected by events in a specific territory (starting from each single block or neighborhood) in a defined period (24 hours a day, 7 days a week and 365 per year), considering the city in its spread and common elements and not strategic, because their design and management are already regulated by specific laws and controlled by, for example in Italy, Civil Protection.

Mitigation actions acting on exposure involve removal, reduction and control of the quantity and quality of the exposed elements in an at risk area: at urban/municipal level, then, the analysis of the exposure must be developed referring to the areas of expansion and consolidated fabric.

The Exposure Index (EI) of each urban function in a single block in the municipal territory (inter-scalar method) is expressed as (Venco, 2016):

Specifically, for the definition of urban exposure must implement the following procedure:

As part of advance planning and proactive urban policies (Godschalck et al., 1999), among several possible strategies, the permanent Relocation is an important tool to reduce urban exposure in areas with high technological and natural risks (flood zones, seismic areas and endangered by landslides), thereby reducing the long-term costs (social and economic) related to emergency management and to post disaster actions.

As mitigation tools, which may become an appropriate balance between the forms of top-down strategic planning and self-organized urban tactics, there are interventions of ethero-organization: in trans-scalar perspective, from neighborhood to regional scale, to reduce exposure may occur relocation actions of a specific urban function in lower-risk areas (Areal change) and/or, in the same place, repositioning of highly exposed functions with other whose exposure is lower (Functional change) (De Lotto et al, 2016).

Areal change: It acts directly on the physical relocation of different buildings in areas less dangerous: the function keeps unchanged and the planner/designer only defines the use of the abandoned building that should have a lower exposure. It is necessary a strong top-down intervention.

This is a practice already used especially in emergency and reconstruction phases after the event.

Therefore, note the economic, social and functional issues related to it, it is clear that it is a high-impact strategy acting on population and building system: the loss of identity of “abandoned” areas, the uprooting of citizens, the creation of new built areas or the use of brownfield or partly built sites, the definition of morphology and typology of new constructions, the high speed of contingency and administrative slowness together with the time required for analysis, evaluation and project design are aspects to be considered in the process of strategy’s development.

Definitely, the advanced intervention with long-time horizons allows an improved management of economic and time resources and also a better information, training and participation of population: it leads to a greater acceptance from the directly and indirectly involved people. 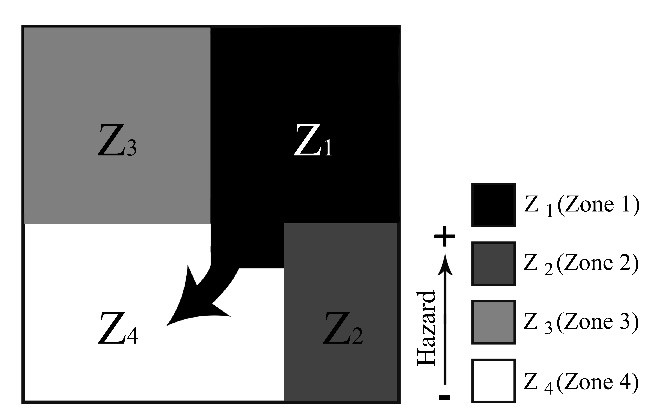 Functional change (Replacement): it acts on the function by reducing exposure (considering users and hours of function use) that implies consequently a reduction of natural risk and physical and economic losses. There are at least two solutions: change of function with same building (the functional changes are able to ensure the exposure and crowding’s reduction, i.e. from residential to tertiary or from facilities to retail); change of function with significant changes of building (new safer construction that fits better with new function, replaces the previous).

In this case, it is possible to have more or less extensive and direct interventions on the building (urban fabric) in relation to the new functions to be set up, the type of risk and the level of vulnerability of buildings. Defined the exposure of the citizen area, urban or regional system, it is possible to define the functional replacement such as to decrease exposure and risk substantially. It is possible to carry out the intervention taking into account the level of compatibility between different uses.

This is a non-structural intervention with a strong maintenance of the physical and social relations where it is essential the population intervention. So, while not substantially affecting the structure of existing buildings but changing the mix of functions and thus only the relationships between the elements inside the intervention area, the strategy allows a more rapid recovery of normal daily life as it is guaranteed continuity of services and high levels of sociability.

Municipality together with private owners.

Areal Change: the process must be strongly controlled at the level of government (local, regional or national) as it involves non-structural measures but territory planning that provides substantial aid to risk reduction and thus the systematic intervention of experts and the use of public resources (top-down intervention).

Functional Change interventions are a clear example of hetero-organized actions: given the general structure (primarily, where and how much decrease exposure) from the experts and decision-makers, citizens are able to promptly determine what changes are to be taken and the order of priority with which carry them out in relation to their needs (functional changes are also defined by economic and labor reasons) (top-down and bottom-up strategy).

These non-structural interventions may also be proposed by the population (Tactical Urbanism): after a strong and wide information and training of population, functional replacement actions are easier as bottom-up management and thus allow greater acceptance of the changes by the people involved.

Nowadays and in this proposal, considering the urban system as a whole, the scale of analysis and interventions is not the single building (purely structural measures are no longer sufficient), nor the strategic elements (ruled independently), or an entire provincial or regional area: the interest is in any urban area (in particular district, neighborhood and/or single block in developing and already industrialized countries) characterized by specific natural hazard, population data, urban functions and thus exposure index.

Beyond risks reduction, it is possible to recognize additional benefits:

The community that is informed, empowered and able to self-organize is better prepared to support and absorb hazardous events. Furthermore, it is clear that the integration of risk analysis, public management and definition of interventions allows the most suitable choice of areal changes, the reduction of soil consumption and an excessive urban sprawl (Menoni e Pesaro, 2008).

In any risk prevention project, it is possible to recognize direct/indirect and private/public costs (social and economic). Since relocation has a highly economically and socially impact on urban settlements and population, in-depth studies (urban planning, social and economic in the short and long term), evaluations with significant criteria (linked to social acceptability, to relations with the place, to the feasibility of intervention, to the economic aspects) and definitions of different scenarios to define the better advanced approach are needed.

Authors are not proposing a defined object but a city plan and new urban development and management strategies, so the costs can vary in relation to natural and built context, number and involvement of citizens and so on.

As largely demonstrated by the facts, even by the most recent management episodes of natural phenomena, the extraordinary and temporary nature of the current emergency policies must be replaced by proactive plans with long-time objectives and with integrated and multidisciplinary approaches.

So, in the short temporal term (from few months to at least one year, in relation to the wideness of area/territory of study) it is necessary the definition of:

In the medium term (one-five years), it is necessary:

In the long term (more than five years):

The presented proposal has a multidisciplinary approach with a strong interest in risk communication, population involvement, stakeholders, public administration, advanced activities, urban development and requalification, and there are many propositions in the contest Anticipating Climate Hazards that could be listed how related proposals.

UN-DESA (Department of economic and social affairs) (2015) Risks of exposure and vulnerability to natural disasters at the city level: a global overview. Population Division, Technical paper no. 2015/02

By:  Elisabetta Maria Venco
Contest: Anticipating Climate Hazards 2017
How can vulnerable communities best prepare for climate-related hazards, and what new tools can be used to incentivize early action?
Follow on: