A carbon-free mass transit system that is 2 to 10 times faster than buses, trains, and cars. Convenient, dependable, affordable, and green.

Transit X™ is a new mass transit system that is 2 to 10 times faster than buses, trains, and cars. Transit X provides a mobility solution that is convenient, dependable, affordable, and environmentally sustainable. 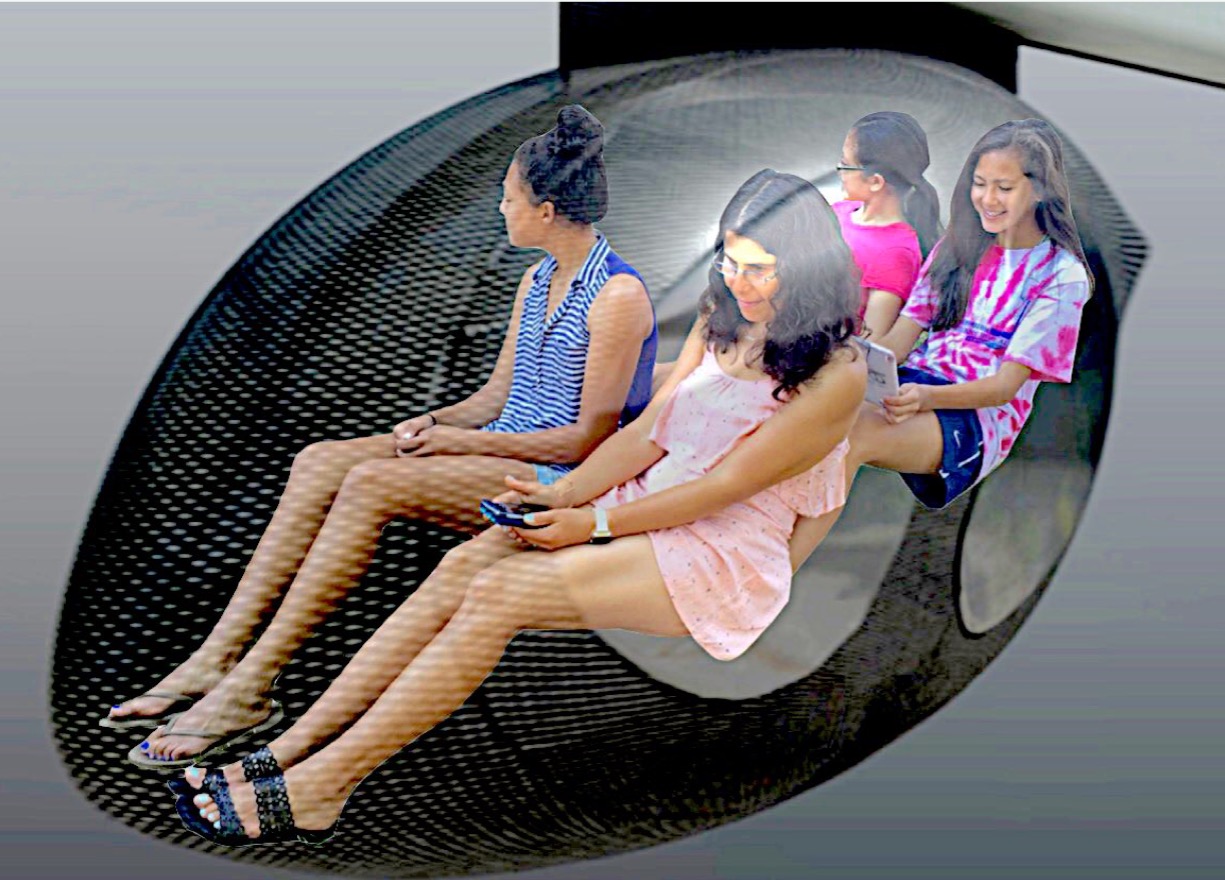 In cities around the world, current transportation is in sad shape: commutes are long and stressful, infrastructure is costly to build and maintain, vehicles pollute and emit green house gases, and millions of accidents and thousands of deaths occur every year.

Transit X solves these problems and provides on-demand, non-stop, 24/7, resilient, all-weather service that is quiet, attractive, safe, and seamlessly fits within cities and along highways.

Ultra-light podcars quietly glide above traffic under a thin rail. Each podcar carries a single rider or up to a family of five, and destinations are entered via smart phone or kiosk. Riders get into a waiting podcar at stops that are as convenient as bus stops. A podcar accelerates up a ramp to merge onto the podcar highway, traveling non-stop until reaching the exit ramp at the destination stop. Travel times are guaranteed.

Transit X helps make cities both greener and cleaner. Unsightly black asphalt can be supplanted by an elegant ribbon in the air that ties a city together.  Transit X can help a city recover its most valuable resource — land. Once again, cities can have a vibrant and active street life. 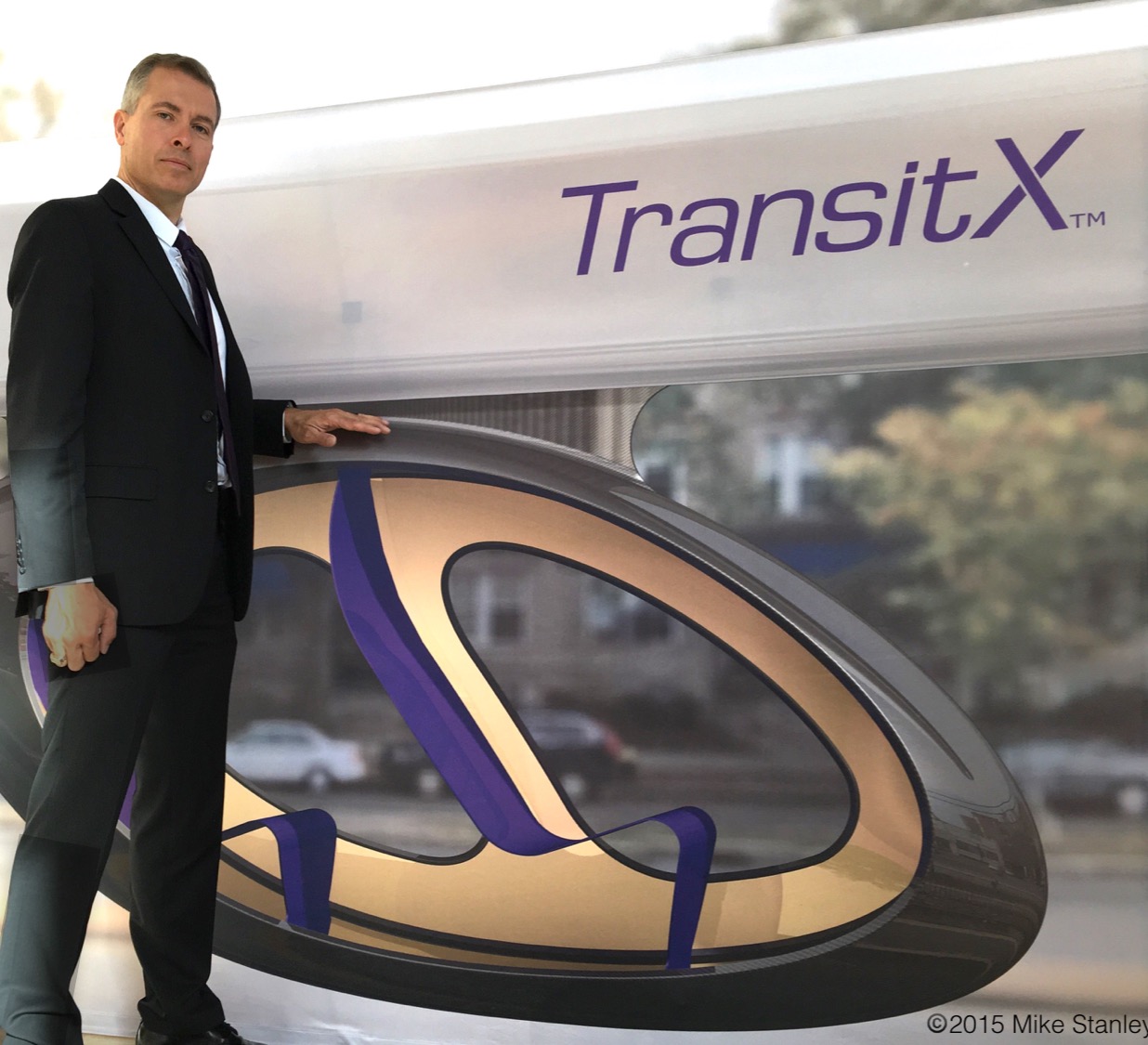 It's a turnkey Mobility-as-a-Service for municipalities and campuses without public funding or capital budgets. Transit X is a privately owned and operated mass transit network that scales to service the world's largest cities.

It build upon the proven safety record of personal rapid transit, and focus on ultra-light, solar-powered vehicles with a high-capacity control system provides something unique: Happy mass transit

To prove the feasibility, a test track needs to be built. That will cost $5M to $10M for a system with multiple intersections, multiple station-stops, and multiple podcars.

Transit X is looking for real estate developers or triple-bottom-line social impact investors to fund the development of a test system in exchange for a percentage of profits on all deployed systems.

We are planning to have Transit X deployed worldwide in 100 cities within 10 years.

Transit X has letters of intent from the City of Everett, City of Chelsea, and the University of Utah to replace their bus systems with Transit X.

To significantly reduce carbon emissions, we need to provide a better and cheaper alternative than cars -- particularly for billions of people in India and China.

We have a plan to make it happen. Top administrators at MIT and Harvard are interested in exploring an option to build such a system on their campus. Before they proceed, they need a letter from the City of Cambridge stating that they would be amenable to receiving a proposal for such a system.  Cambridge City Councilors have voted to support it, but a letter of interest from the City Manager is needed.

I propose that the city manager of Cambridge write a letter of support for efficient and pollution-free transit systems using dedicated, unused rights-of-way.

It will start in the Boston area and quickly spread worldwide.

Most cities around the world face issues such as long commutes, congestion, air pollution, lack of green space, limited affordable housing and inconvenient access to jobs.

Transit X wants to talk with the government representatives in those cities to show them an option for a private funded mass transit system.

Transportation contributes about 28% of carbon emissions, and very few carbon-free alternatives exist for transportation. The availability of a carbon-free transportation system that is both convenient and low-cost has the potential to replace buses, cars, trains, and trucks -- significantly reducing the amount of emissions.

Transit X would nearly eliminate all unsafe conditions and crashes. Based on well- accepted statistical methods, we estimate that a podcar could achieve a level of safety 4 or 5 orders of magnitude better than the existing road system, or an “unsafe condition” approximately once every 100,000 years. It would be one the safest transit systems in operation, reaching a safety level close to airline travel and higher than trains.

Have you been to China recently? The air pollution is dangerously high. Around the world, people face the negative effects of pollution on our health. Improving our air quality results in less asthma and other respiratory diseases. Clean, pollution-free mobility that encourages 15 minutes of walking per day is good for us and good for the economy.

Transit infrastructure is now incredibly costly and requires millions or billions of dollars in public funding.

Low-cost transit networks built with the proposed system can be created top-down or bottom-up without extensive planning or having to commit to massive projects.

Our process is fundamentally different from what is currently assumed by nearly everyone — that transportation infrastructure is enormously costly and that government funding must be used to pay for it.

We are saying something fundamentally different: that a low-cost infrastructure can be paid for by the people deriving value from it. This is a great way to align decisions and dollars.

Federal and state funding could then be made available to fund the capital costs for building mass transit highways to less densely populated areas where the capital costs of building a system would be difficult to justify in the short term, but has long term value. For example, connecting small towns to large city centers.

We would use the CoLab's award to make one or more working scale systems that can shown in traveling exhibits around the US and worldwide.

The next milestone is the development of a full-size, safety-certified test system.  That is the linchpin to a fast global rollout without the need for public funding.  Corporate green infrastructure revenue bonds will fund each deployment.

By:  Transit X
Contest: Transportation 2016
What initiatives, policies and technologies can significantly reduce greenhouse gas emissions from the transportation sector?
Follow on: