The term “landuse” restricts our thinking even as fossil fuel consumption alters both land (30% of Earth’s surface) and sea (70%) with: gradually warming, more extreme weather, acidification, hypoxia, disruptions of the nitrogen cycle, droughts, floods, seawater intrusion into coastal and island fresh water aquifers, etc.  Land and ocean are intertwined.  Please expand Climate CoLab’s discussion of “landuse” to “Earthuse.”  Marine Agronomy is a subset of Earthuse which interacts with terrestrial farming and forestry.

Marine Agronomy is seaweed farming for food, feed and biochemicals and a sub-proposal of the Ocean Foresters’ Global Plan.  The 3-dimensional nature of water agriculture and our improved knowledge of ecology, allow us to conduct ocean-healing farming.  In contrast to terrestrial agriculture, ocean farms and forests are capable of:

Supplementing our food supply with many millions of tons more food.

Sparing land and freshwater that would otherwise be used to expand agriculture.

Hedging against shortfalls in agricultural production due to climate change.

Providing all the above environmental and food security benefits while putting no extra tax burden on society.

About 20 million tons/yr of seaweed is now farmed worldwide, almost all in Asia. But this is only 0.3% of food farmed on land. Yet the oceans cover 70% of Earth. This vast space can be more effectively used to sustain humanity. This is not a new idea, the U.S. Marine Biomass Program having done pioneering work in this area in the 1970s. What is new is appreciation of the urgency to find climate-change-immune food security , and advances in aquaculture techniques that make the prospect of oceanic farming more ocean-healing.

1.      Replace “landuse” with “Earthuse” in all discussions of GHG impacts.

The term “landuse” implies forgetting about the 70% of Earth’s environment which is uniformly assaulted with acidification and warming while being regionally impacted with humanity’s landuse.

Increase demand for seaweed farming by increasing the quality and diversity of staples and snacks made from seaweed: such as a  "seaweed-based Plumpy’Nut," flour, livestock and fish feed, new foods from seaweed or algae blooms such as a peanut butter substitute or 3D printed tasty seaweed jerky, etc.  This in addition to the current high-value but low-volume demand for whole fresh seaweed and crustaceans (see for example Bren Smith's ocean farm).

One reason offshore oil development and liquefied natural gas terminals can be built relatively quickly is their environmental impacts are known.  The unknown expense of studies and ongoing monitoring for marine agronomy operations should be offset by subsidies for extensive monitoring combined with large-scale generic permits and models for paying the managers of Ocean Forestry for ecosystem services.

Marine farms and forests can also include real-time scientific information gathering via power and instrumentation cables extended to shore.  School children could view and interact with sea life by controlling an ROV over the internet.

5.      Include Ocean-healing Development goals in all national research plans.

Action 1 is by Climate CoLab.  Will you be the first international climate change contest to expand from the narrow “silo” of landuse to recognize earth and water, air and land and sea, are inseparable? 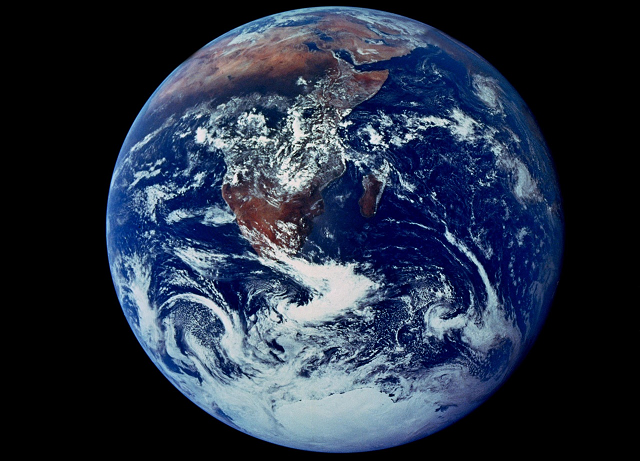 The funding agencies may prefer to retain universities.  Many are involved in attempts to 3D-print substitutes for traditional animal foods.

Action 3 results from pro-active environmentalists convincing their representatives to invest in the safe (ocean-healing) growth of a new sustainable form of farming and forestry.

Seaweed grows in every ocean throughout the world, especially where there are nutrients, either from coastal runoff or from ocean upwellings.

Action 1 is at MIT and throughout the Climate CoLab organization.

Action 2 is by food developers, globally.

Action 3 is by developed country governments.

Seaweed grown in sufficient quantity can sequester all the excess CO2 in the atmosphere and oceans and completely reverse ocean acidity and gradually bring our climate back to the pre-fossil fuel era.

Water – Fresh water is the major benefit.  Marine agronomy produces virtual freshwater.  The benefits for farming are similar to desalting vast volumes of seawater (without the energy use and concentrated brine disposal).    Most freshwater (70-80%) is used to grow food, a fact which has placed negative connotations on “virtual water.”  Freshwater grown food is also the primary driver for conflicts, migrations, river diversions, groundwater overdraft, coastal deadzones, etc.

By reversing ocean acidity, it improves the ecosystem, and saves the dying coral reefs and shellfish.

By removing CO2, it reduces climate change and the natural disaster stresses.

Marine agronomy can be profitable throughout the world.

There are no costs in the traditional sense of funds building a sea-wall which serves only to preserve human development below sea level.

Instead, one can expect to recover invested funds in:

Profitable businesses are already growing seaweed for food, fertilizers, and other products throughout the world.

See picture below of an Ocean Approved harvest in Maine, USA. 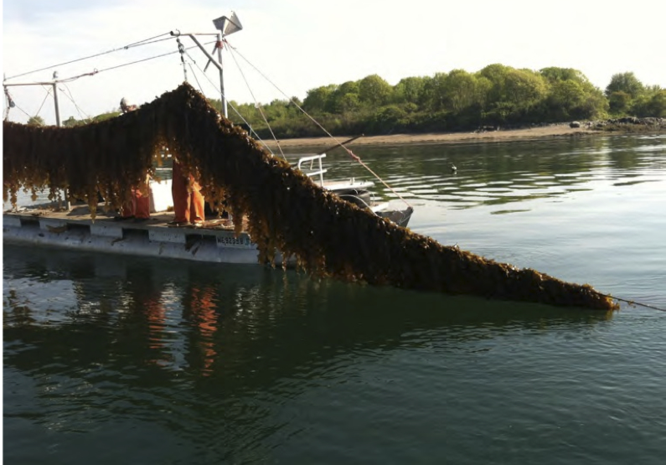 Marine agronomy is happening now.  The more rapidly it can be expanded with more investment and supportive ocean laws, the better for everyone.

Left to market forces, marine agronomy will continue expanding in existing markets, mostly in Asia, making a small dent in global malnutrition over the next couple decades.

However, immediate global investments of a few $tens of millions could produce enough good nutritious food to enable safe-yield groundwater management in grain-growing areas within a decade.

By:  Ocean Foresters
Contest: Land Use: Agriculture, Livestock & Forestry 2014
How can we scale-up sustainable landscape management to reduce GHG emissions while ensuring food, water, and energy security?
Follow on: