Production of bio-coal via torrefaction and subsequent replacement of coal with bio-coal for the reduction of GHG’s from cement production.

Diacarbon is a leader in the development of thermochemical biomass refinery technology (TBR) toward the production of biochar and bio-coal.  Diacarbon’s TBR technology upgrades low-value biomass into higher energy drop-in biofuels and products.

Our technology is a waste-to-energy solution that diverts waste streams while making a carbon-neutral biofuel that is a clean, direct replacement for coal. 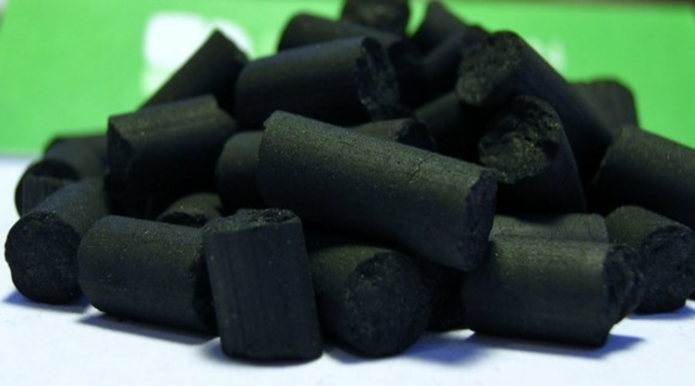 Diacarbon’s bio-coal will be utilised by cement facilities as a drop-in fuel replacement for fossil coal and petroleum coke. Diacarbon’s bio-coal (“torrefied biomass”) is a solid biofuel that has significantly improved energy density, handling, and co-firing characteristics as compared to existing biomass fuels, making it mechanically and physically equivalent to coal.  Additionally, bio-coal has several advantages over coal that translate into financial savings for cement companies.  As a biomass-derived fuel, bio-coal is generally exempt from carbon taxes, and can qualify for carbon offsetting.  Bio-coal also contains less sulfur and nitrogen than coal and coke, and as a result produces fewer emissions when burned.  This in turns means less emission scrubbing costs and emission penalties.

Diacarbon proposes the production of bio-coal via torrefaction of biomass waste, and the subsequent replacement of coal with bio-coal, to significantly reduce the emission of greenhouse gases (GHGs) from the coal-consuming cement industry.

Since bio-coal is derived from biomass, it is a carbon-neutral solid fuel that provides a similar amount of energy per tonne than fossil coal as shown in the figure below (1).

The use of bio-coal requires little or no modification to existing infrastructure/assets which supports its use as a drop-in fuel replacement for coal and in turn avoids the requirement for investment in additional equipment/infrastructure by the cement producer. Thus, using bio-coal as a replacement for coal (co-firing bio-coal and coal together) by industries such as cement manufacturers would result in a reduction in their carbon tax due to reduction in net CO2 emissions.  This would be the primary financial incentive of such industries to consider such a switch.

Comparison of Coal and Biofuels:

Diacarbon has successfully completed industrial scale co-firing of its bio-coal (50 tonnes of bio-coal at 10% co-fire rate) in a cement kiln application in addition to receiving letters of intent for the purchase of significant quantities of bio-coal from two large cement producers.  Diacarbon will commission its commercial TBR through a demonstration project in 2014. The project will provide key operational, technical, and financial data parameters necessary for commercial scale-out of deployments in the production and delivery of bio-coal to the cement industry.

The initial business approach to expand the market availability of bio-coal and to replicate the TBR technology is to Build-Own-Operate projects with strategic partners (development partners, site owners and off-take partners such as cement producers) including entities that have access to feedstock.  Diacarbon will develop projects and deploy refineries onsite or close to feedstock sources that are within regional proximity to the cement facilities so as to reduce transport/logistics costs and thereby improve production margins. Production capacity required in order to service off-take demand will be met through (i) adding additional modules to existing sites and/or (ii) increasing fibre access through additional project sites. Commercial roll-out will be centered on increasing off-take to cement producers while developing new segments/applications (CHP, coal-fired generation) for bio-coal. Diacarbon’s initial TBR deployments will serve to validate the technology and bio-coal while allowing for ramp-up to industrial scale production volumes. Diacarbon will expand markets for its TBR technology globally through a licencing strategy.

Government subsidies to offset technology risk and support technology development will play an important role in end-user adoption and market penetration during the company’s initial stages.

GHG protocols and policy provide a key driver for adoption of Diacarbon’s bio-coal as a means to reduce their emissions and carbon tax/penalties. Policies will help drive project economics by supporting the price by which bio-coal can be sold as well as the demand. The following table provides a summary of existing carbon tax and market systems (2).

Diacarbon’s bio-coal will be competitively priced against both primary and competing fuel types in consideration of benefits realized through carbon tax reductions and sale of carbon offsets.

Diacarbon anticipates improvements to the cost structure of producing bio-coal through optimizing value chain efficiencies especially as they relate to fibre sourcing and transport. The company will look to gain experience through its pre-commercial demonstration project to identify ways to improve efficiencies and cut costs related to the production of bio-coal.

The company expects that the following drivers will help facilitate adoption and allow bio-coal prices to appreciate in the coming years thereby allowing for improved margins:

Continuing to work with and strengthen partnerships within industry, academia and government is core to Diacarbon’s (i) delivery of a turn-key solution (ii) development of biofuels/applications, and (iii) commercial scale out.

The initial commercial demonstration project will take place in Canada, specifically British Columbia’s Lower Mainland region where Diacarbon has partnered with a large global cement producer who will support development of the bio-coal fuel specification, and is an end-user/first commercial customer of bio-coal produced by the TBR Demonstration Project. The cement industry in BC provides an advantageous market entry point due to (i) supportive carbon policy: carbon tax in of $30/tonne of CO2e, (ii) the cement industry accounting for the vast majority of provincial coal consumption, and (iii) abundant low-cost feedstock resources.

The Company anticipates building the initial TBR’s in Canada as part of its commercial roll-out strategy. Commercial deployments will support product validation & standardization in addition to optimizing process conditions, value chain efficiencies and establishing a platform for expansion within the global cement industry.

The company will look to further expand the market for its technology and bio-coal products throughout North America and internationally as early as 2019. Diacarbon will focus on regions with supportive carbon policy/regulatory drivers and large scale CO2 emitters seeking enhanced co-fire opportunities.

The application of bio-coal as a drop-in replacement for coal in the global cement manufacturing industry has the potential to significantly reduce emissions. For example, based on the 2010 global cement production of approximately 3.3 billion tonnes where 200 kg of coal is consumed for every tonne of cement produced, replacing all coal consumption with bio-coal could lead to over 2 billion tonnes of GHG reductions annually (3)(4) .

At present, the cement industry is the largest consumer of coal in British Columbia, and the market incumbent for bio-coal, and the goal is to maximize production of bio-coal to reduce local GHG emissions, and capture significant market share. By 2021 the company aims to displace over 270000 tonnes of coal with bio-coal, which would result in the cumulative GHG reduction (CO2 equivalents) of more than 850000 tonnes per year (5). The figure below highlights the benefits realized from co-firing bio-coal in the above scenario (6).

(A) Creating direct environmental benefits through (i) the utilization of biomass waste streams, (ii) the production of clean fossil fuel replacements, and (iii) the reduction of greenhouse gas emissions as a result of the displacement of fossil fuels.

(B) Achieving direct financial benefits by (i) utilizing and upgrading biomass that was destined for the landfill, (ii) partially displacing fossil coal with bio-coal resulting in carbon tax savings, and (iii) enabling coal consumers to access carbon markets and further reduce their bio-coal costs.

(C) Reduced Up-front Capital Investment:  the use of bio-coal requires little or no modification to existing infrastructure. This  avoids the requirement for investment in equipment by the end-user in addition to avoiding lengthy start-up times.

Capital and Technology Requirements: Diacarbon possesses the technology, know-how, and experience including production and industrial scale co-firing of bio-coal. Diacarbon has committed investors and stakeholders including strategic industry partners to provide the necessary support to bring its technology to market via commercial demonstration.  Diacarbon has already secured the required capital from investors in addition to receiving government grants supporting the initial roll-out of the company’s TBR technology. This in turn will help drive commercialization and rapid scale-up of production volumes necessary for large scale adoption of bio-coal from the cement industry.

Research & Development: In order for the bio-coal market to develop, fuel characteristics and their impact on plant operations must be well understood. Product validation with regards to bio-coal quality and specifications is a key to end-user adoption.  Existing and planned co-fire trials with cement producers will allow for the collection of data about milling, handling, storage, transporting and combustion of bio-coal. Diacarbon will work collaboratively with end-users to develop specifications/standards while ongoing collaborative projects with stakeholders from academia, government and industry will help expedite development efforts and mitigate costs.

End-user Requirements: The use of bio-coal by cement facilities requires little or no modification to existing infrastructure/assets while the energy density and other properties of bio-coal avoid de-rating of the capacity.  Diacarbon’s bio-coal will be competitively priced against both primary and competing fuel types in consideration of benefits realized through carbon tax / penalties reductions and sale of carbon offsets thereby creating a cost saving for cement producers.

Short term (5-15 years): Commercial demonstration and subsequent TBR deployments (as well as continued development work with our pilot plant) will allow the company to gain experience with the operations of torrefaction projects and develop value chain efficiencies ahead of the competition. The focus during this period will be on the (i) product standardization and achieving significant production volumes of bio-coal; (ii) expanding the markets for the technology and bio-coal internationally within regions that have supportive carbon policy and drivers; (iii) building on IP portfolio and increasing the scope of R&D for product applications and; (iv) penetrating other heat and power production segments such as coal-fired generation, district heating and CHP.

Medium term (15-50 years):  Diacarbon will continue to forge a strong consortium with research institutions, industry groups, academia and government in order to (i) expedite the development of its technology, (ii) advance development of value added bio-products, (iii) aid penetration into new segments, and (iv)drive support for carbon policy. Formation of joint ventures with strategic industry partners will be central in developing biofuel/technology applications.

During this period, Diacarbon aims to achieve: (i) a fully optimized value chain, (ii) a dominant penetration into heat and power segments globally, and (ii) production volumes that will help drive the commoditization of bio-coal and in turn drive end-user adoption.

Diacarbon’s proposal complements the proposal titled “Improving Cement’s Footprint over the full construction value chain”, by addressing the footprint of the production stage of the cement life cycle. Moreover, for proposals aiming to reduce the use of cement as a binder in concrete, the production stage of cement remains relevant, and fuel substitution to reduce GHGs is desirable in order to further reduce the impact of any amount of cement used.

Diacarbon’s proposal has impacts beyond the cement industry, providing solutions for the reduction of emissions from waste management. Diacarbon’s TBR technology helps bridge the gap between the demand for biofuels and the abundant supply of biomass waste currently available globally. This allows low-value waste streams from the forest, agricultural, and urban sectors to be diverted from landfills and converted into higher value biofuels and bioproducts.

The following numbered references correspond to the previous questions.

(1) (a) Prospects of torrefaction to optimize bioenergy value chains, Energy Research Center of the Netherlands, 2011 (b) Diacarbon bio-coal data used based internal testing and analysis.

(2) Pembina Institute, August 2012, (*) Based on estimates of price for offsets offered through Pacific Carbon Trust (PCT)

By:  Darren Blanch
Contest: Profitably reducing emissions from cement 2013
What can be done to reduce GHG emissions in the cement industry profitably?
Follow on: