Wind turbines offer a source of renewable energy that helps reduce Greenhouse Gas emissions in the production and use of electricity. Vertical Axis Wind Turbines (VAWT) have the advantage of being owned on small scales, installed relatively close to ground levels and requiring less maintenance frequency and costs than their Horizontal Axis Wind Turbines (HAWT) counterpart.

However, energy production is most times proportional to how fast the turbines rotate in prevailing winds. This proposal gives a scientific and design approach to help VAWT's spin faster, reach peak speeds and produce more energy.

The proposal aims to provide a method of making small VAWT more energy efficient, thereby reducing SMEs emissions and providing more energy at the same cost of purchasing off the grid. The following methods are in consideration:

Vortex surfing has been observed in nature in the V formation of migrating birds. Birds fly in the upwash from wingtip vortices of birds in front of them in order to conserve energy. 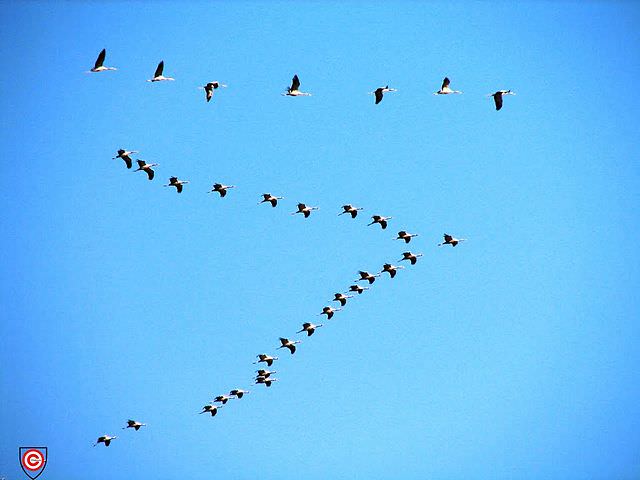 Adapting this to wind energy, the following is proposed:

Buildings in urban spaces accelerate winds around their bases, tops and corners. This happens when air blows on the face of buildings and are forced up, down or sideways of the buildings. The resulting winds are relatively unidirectional and faster than they were before hitting the building and sometimes result into gust. This proposal seeks to exploit these faster winds by lining several VAWT's at corners or rooftops to receive these rushing winds.

Certain materials have been discovered to produce electricity when forces are applied on them. Ambient energy in vibrations from the wind turbines will be harnessed to produce some energy.

One of the barriers this solution will overcome is the elimination of overhead energy costs as a result of transmission through the grid network as energy is produced in-situ area of usage. There is also less energy loss that is commonly associated with the transmission of energy over networks.

Reduced cost of mounting poles as seen in conventional vertical and horizontal turbines.

Often VAWT do not meet up to their manufacturer's rated performance. This solution will help VAWT reach higher speeds more frequently and produce more energy. This makes more energy available, translating to lesser costs and more power for their money.

Technically, all wind turbines create a tip vortex and creates up/downwash which is lost to the immediate atmosphere. This solution allows trailing blades of other turbines ride in their upwash just as is seen in the V formation of birds in flight. The peculiarity of its use in VAWT is that, instead of series of turbines reducing their speed and gaining the upwash to maintain the speed of their leader, the turbines both gain the upwash and use up current wind speeds thereby increasing overall VAWT system speed in an increasing sequence similar in manner to a fibonacci series. The method of re-routing airflow throw fluid systems seen in Vortex surfing has also been used in military flight missions to reduce fuel consumption and in vehicles with turbo engines for fuel efficiency. 10% fuel savings was recorded by NASA in experiments adopting V formation to air craft flight, a concurrent 10% minimum increase in efficiency is predicted through this method.

Wind speeds have been discovered to accelerate at the edges of buildings. Arranging turbines at these edges provide higher wind speeds for producing more energy than if turbines were placed anywhere else or at mere ground level. Gusts have been measured at 30km/h at a corner of the Four Seasons Hotel in Toronto and 5km/h at another. This reveals chances of available effective winds about 6 times faster than at other parts of the city.

Combining the above, the option of energy costs lesser than its purchase off the Ontario energy grid or more energy for the same price they used to purchase when compared to conventional wind energy methods. The solution is not a totally new method but just improvements in practice and design thus, it fits into existing modes of harnessing wind energy.

This method ensures a typical $6,000 VAWT produces its rated 1KW enough to power 10 PCs simultaneously at all times as opposed to almost half power provided by former turbines. A system of 10 = 100 working PCs

The end users of this solution are owners of multi-tenant buildings and office based businesses. Office activities mainly consume energy from the use of computers, mobile devices, office equipment and lighting. This solution can supplement or replace grid demand for energy usage directly connected to business activities involving usage of lower energy consuming devices mentioned above.

The three bladed Helical lift based Vertical Axis Wind Turbine is reported to have the best efficiency available presently and is selected for this project.

A business as Legal Entity, "Airxtra" will be formed to handle piloting and production.
A partnership will be formed with a manufacturing and fabrications company related to small vertical wind turbine in or close to Ontario. One of such company has been discovered in nearby Montreal, Quebec, which is East of Ontario. This will be done to enable the modification and production of Helical lift based Vertical Axis Wind Turbines and fittings to mount the turbines. Simulations will also be done at the Building Aerodynamics / Wind Tunnel Lab at the nearby Concordia University, Montreal, Quebec in order to obtain data to assist in prototyping wind turbines.

As stated above, Vortex Surfing, Downdraught Effect and Piezoelectric Effect will be used to improve efficiency of power generation through the wind. 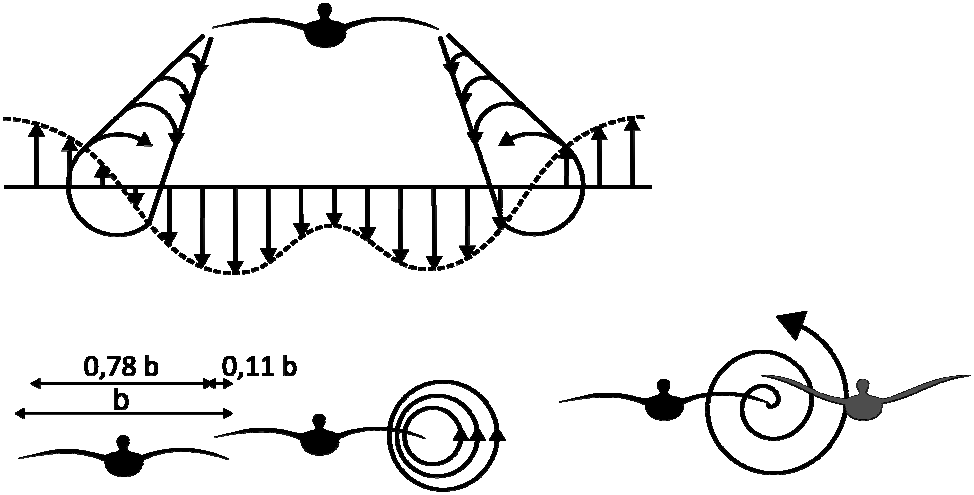 Notice the direction of the arrow of the tip vortice directed and pushing upwards, subsequently lifting aligned bird upward 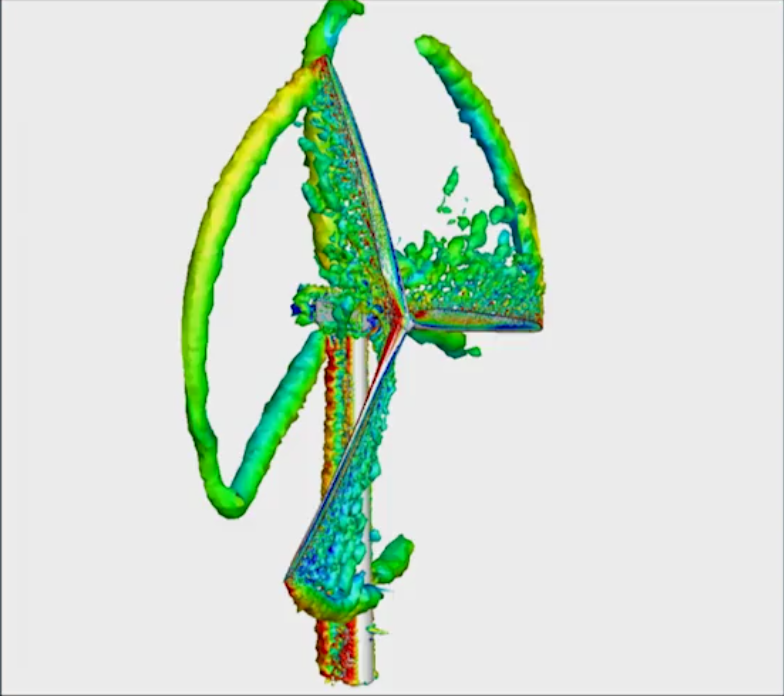 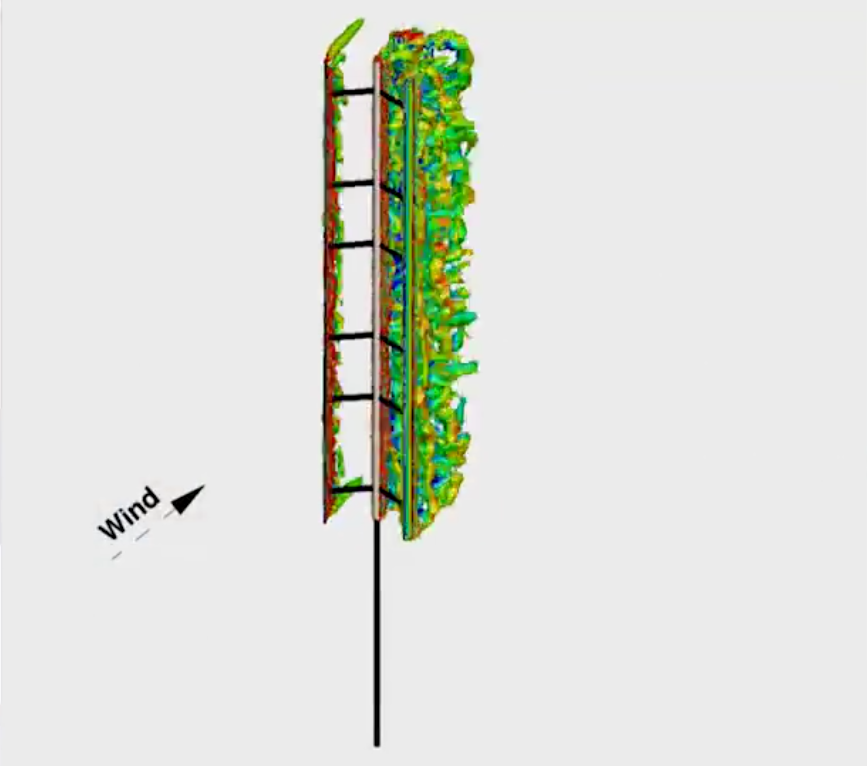 Action: Several smaller lift based helical VAWT's, scaled down to half and also a third of conventional vertical wind turbines(half and a third for two scales of testing) will be manufactured for the pilot test. Turbines of the same scale will  arranged in series (one on top of the other) with adequate spacing. During operation, the turbines behind would ride the tip vortices from the blades of other turbines before them in the series arrangement. This riding causes additional lift to that gotten from normal wind flow hence causing them to rotate faster. Since all turbines will be connected together, their increased speed drives a towing effect on VAWT's before them thereby causing the whole system to accelerate faster than under natural wind induced lift.

Buildings in urban landscapes induce varying air pressures around them. Winds striking their surfaces move faster at their tops, sides and bottoms and are faster at these points. 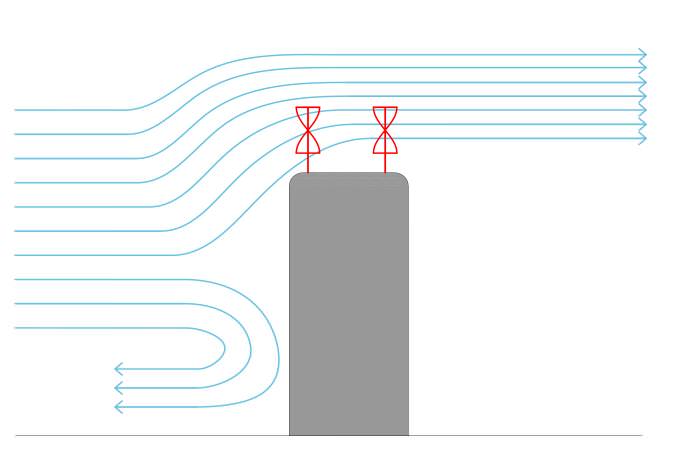 Roof tops will be selected for this project because this position sites turbines away from pedestrian interference, consume the least real estate and are safer up high.

Series of Helical VAWT's on roof top of building

Fittings will be fabricated to attach turbines to one another in series and to mount them to buildings roof tops.

During simulations, areas of high turbulence in the wake of air dispelled by the turbine will be discovered and appropriate fittings will hold piezoelectric materials in such positions so that the vibrate and produce electricity in said turbulence areas.

Eventually the turbines would rotate electromagnetic engines which would produce energy and rectifier circuits would extract energy from the piezoelectric materials. All these would be connected to a power inverter which converts produced electricity from Direct to Alternating Current at approved power ratings and be used to service office buildings.

I propose the following actions:

Wind measurement and analysis: Wind observation, modelling and analysis would be taken in order get the wind distribution in Ottawa and Toronto, Ontario. This information will help mounting the turbines at optimum height with respect to wind speed and obstruction.

The data gotten from the two analysis would help create prototypes suited for businesses, landscape & environment and long term sustainability of the product.

Production of a few units and randomly testing the usage and public perception of the product and measuring energy production.

Feedback from testing would help modify prototypes to a final product.

We'll start selling, reduce SMEs cost and making earnings for business sustainability. Sales to building owners would be on total outright purchase of turbine systems or rent-to-own financial plans which might include additional interest charge. Part financing may also be obtained from the government of Ontario in form of collaboration or subsidy payment on turbine systems. Sales would be based on pre orders until company is financially capable of handling post orders.

Adebayo Akinbi: Team Leader and Meteorologist. Responsible for wind analysis, correspondence with government agencies, consultants, and manufacturers. Supervising modification of VAWT and handling of its logistics to Ottawa and Toronto.

Adefemi Akinbi: Architect. Responsible for assisting in manufacturing of fittings of VAWT to buildings. Mounting turbines to buildings or open space. Analysis of buildings with high downdraught.

Olalekan Balogun: Assist Architect in manufacturing of fittings of VAWT to buildings. Mounting turbines to buildings or open space. Analysis of buildings with high downdraught.

The solution will be piloted in Ottawa and Toronto in Ontario, Canada. The city will be surveyed in order to find

Assessment of buildings with respect to high downdraught - $4000

Once it is built and after successful pilot, the following will be done:

Vertical Axis Wind Turbines could provide useful wind breakers for gusts that occur close to the surface of office buildings.

Adebayo Akinbi is a Meteorologist and has experience working for the Lagos State Ministry of the Environment, Lagos, Nigeria as a scientific officer. He has been involved in weather and climate observations and analysis with over 5 years experience in matter of the environment. He was part of the team that reviewed the Water Supply, Sanitation and Hygiene Policy for Lagos State in 2017. He also has some knowledge of hardware and an enthusiast of the maker culture.

Adedoyin Akinbi holds a Bachelor of Science degree in Animal Breeding and Genetics. He has had experiences as a farm manager and also in business as a manager for graphics and photography talents and interfacing with customers, as well as social media and online marketing.

Adefemi Akinbi, owner and founder FemArc Studios, Design and 3D Visualization firm in Lagos, Nigeria. He is an Interior designer and Architect. He had his Undergarduate degree in Architecture at the University of Lagos, Nigeria and Masters in Environmental Design in view. Adefemi has over 6 years of experience in freelance 3D design and construction. Adefemi is an entrepreneur at heart skilled in multiple design software and furniture design.