Aquaponic roof farming towards SDGs 2, 11 and 16 by Del Techo Colombia

Our low-cost aquaponic prototype is set to scale-up. It empowers vulnerable communities to face climate change and post-conflict challenges.

The fight for climate change will be won in cities, if it is led by citizens like us. Our project is firmly set on our beliefs:

We believe in collaborative action.

We believe in honest partnerships between public and private sectors, with civil society-led initiatives, in order to improve our quality of life.

We believe in pragmatic, well-planned, financially sustainable projects that place local needs at their core.Our aquaponic roof farming project targets Sustainable Development Goals (SDG) 2, 11 and 16. By implementing  low-cost aquaponic systems in undervalued urban spaces (such as roofs and terraces), vulnerable communities can have a steady source of highly nutritional vegetables, fruits and fish (surplus can be traded or sold).  By targeting key urban territories, we can generate positive externalities related to emission reduction, urban resilience, and social cohesion in the post-conflict scenario of Colombia.

Our prototype has been tested, it has proven to be feasible, and is ready to be scaled-up. 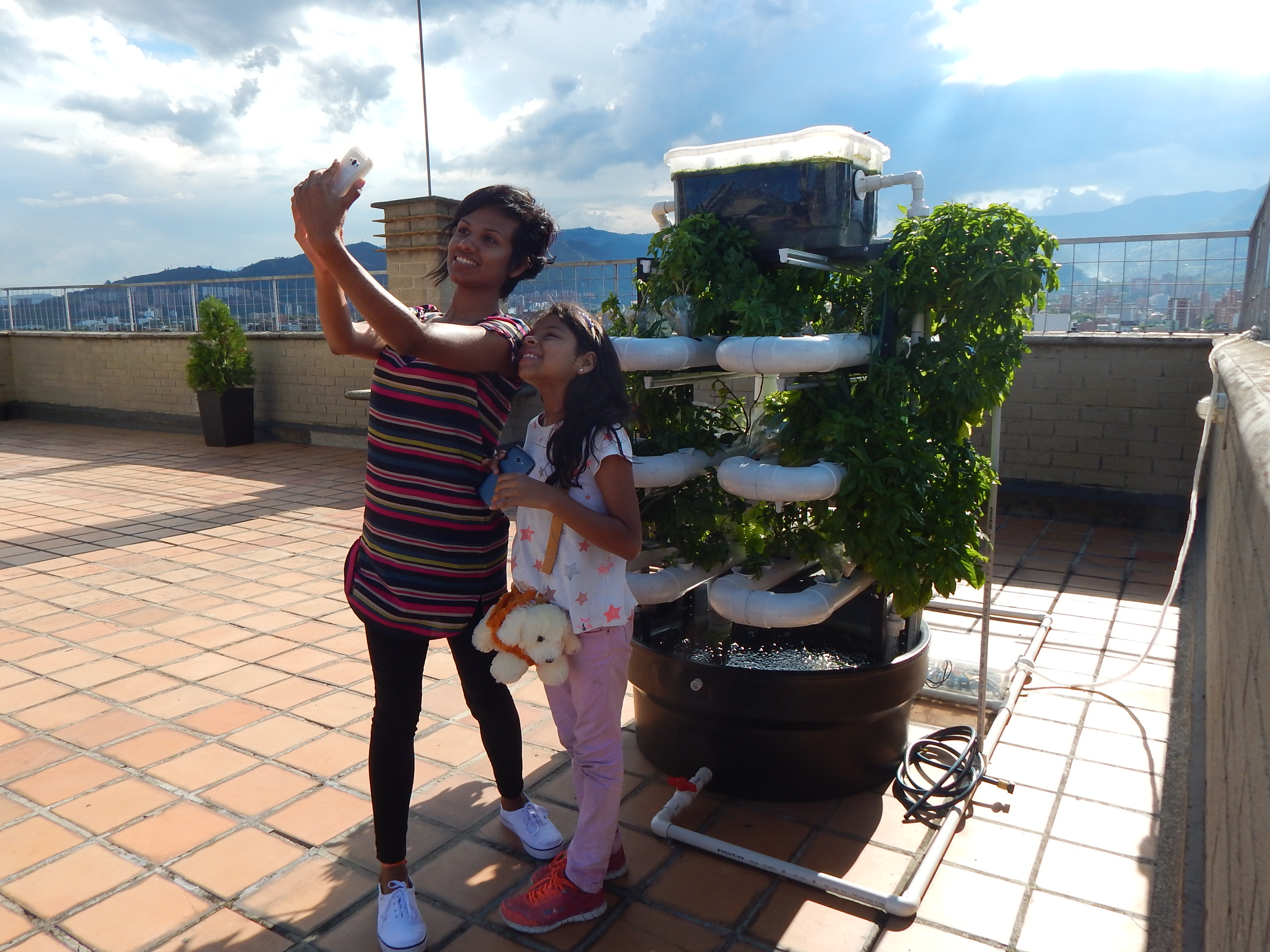 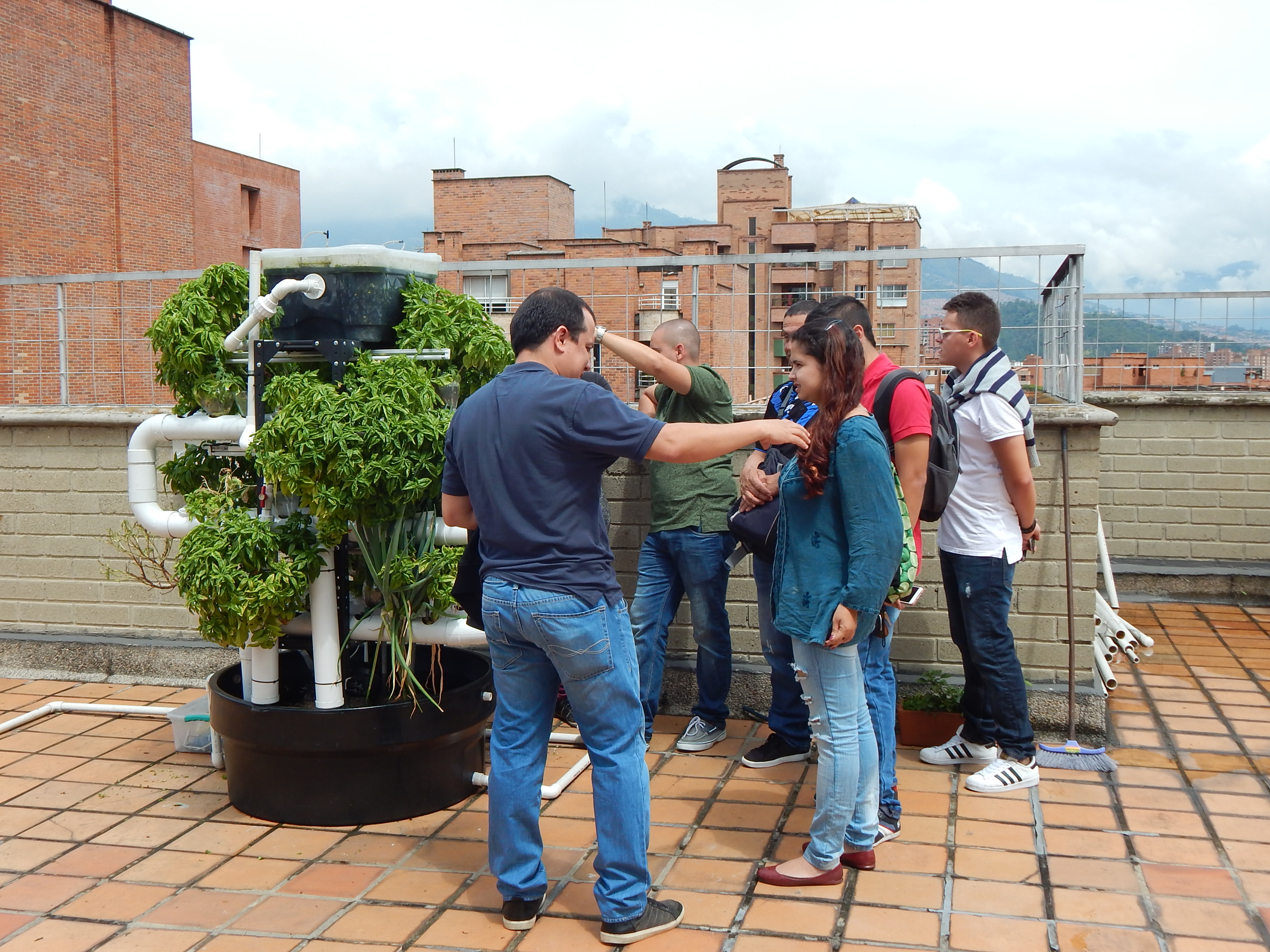 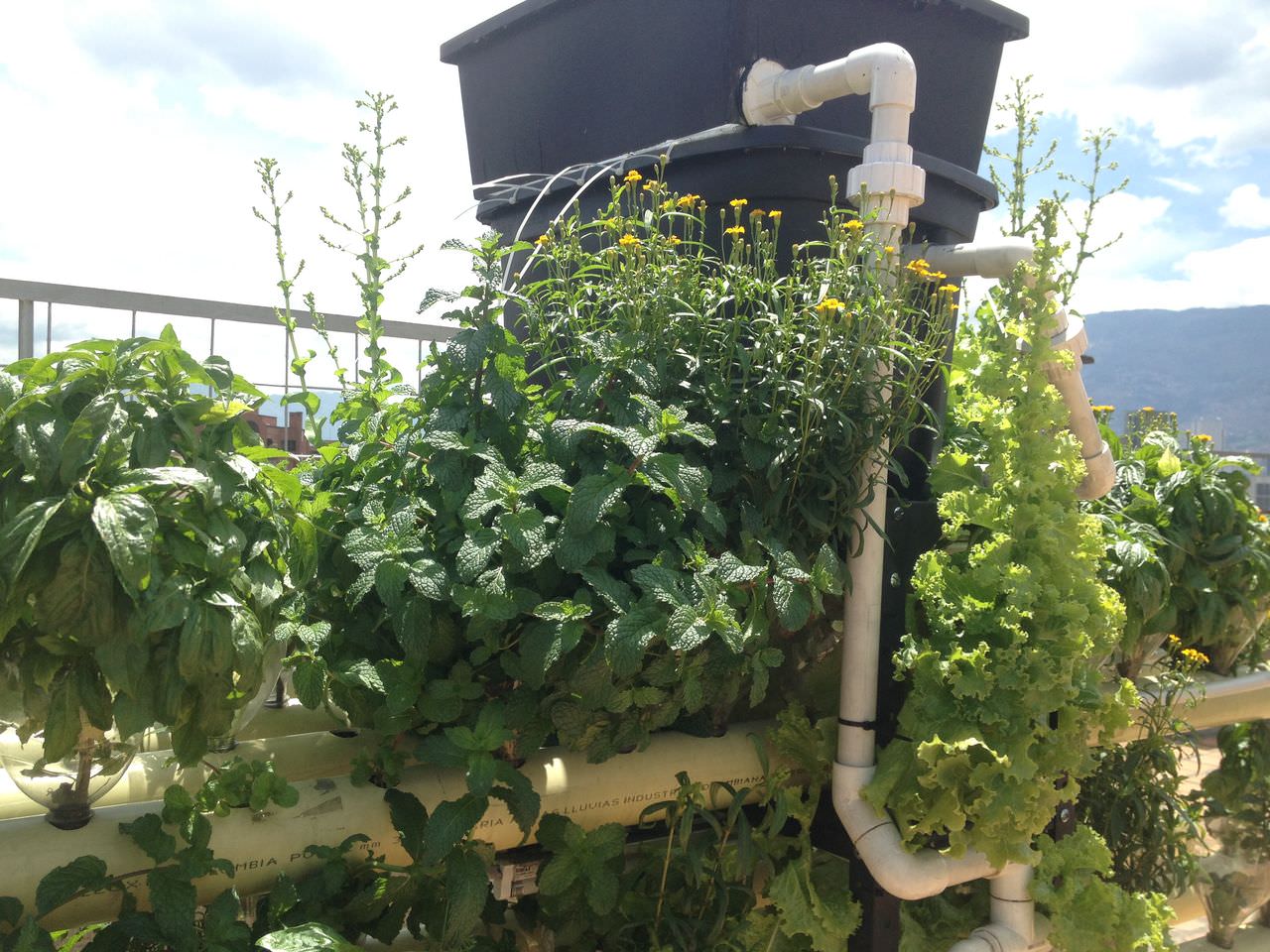 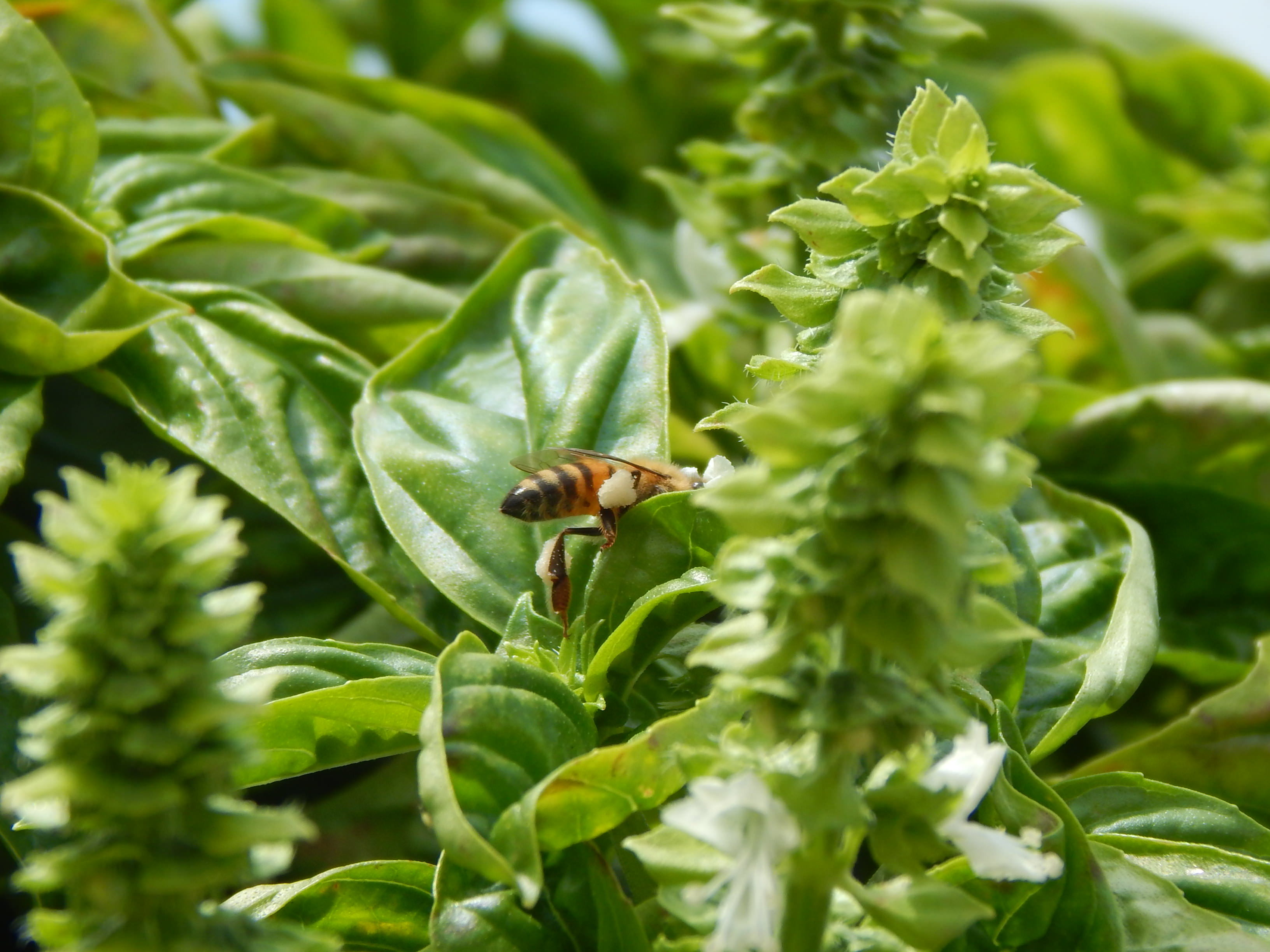 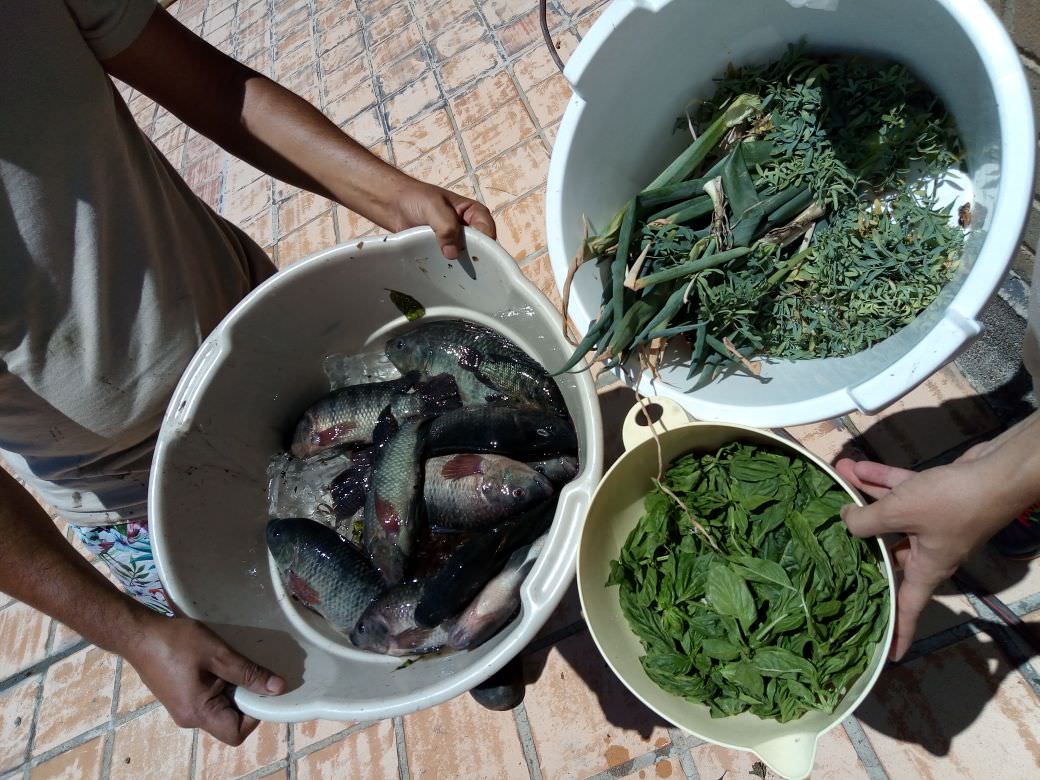 What actions do you propose? / Quelles actions proposez-vous?

The main objective of this project will be to implement integrated fish and plant farming systems, in undervalued urban spaces, such as roofs and terraces.

The secondary objectives of this project will be to: (1) empower local communities to harvest their own food and generate parallel sources of income; (2) promote human encounters, conversations, collaboration, and social cohesion, in the post-conflict scenario of Colombia (3) contribute with greater awareness towards the sources of our food, their production processes, and our overall relati

In order to implement our aquaponic roof agriculture system successfully, we propose these actions in the following order:

(1) Shortlisting the urban hubs where aquaponic systems can be implemented, based on a list of indicators. In order to target vulnerable communities, food insecurity and migration/displacement is taken as the priority input. Analysis using Geographical Information Systems (GIS) allows for this shortlisting of territories.

(2) Selection of the sites considering the low-cost availability of the required supplies. A multi-criteria matrix allows for analyzing the shortlisted sites across the following criteria: (a) the presence of at least one consolidated grassroots social organization in the territory; (b) a transit station within 500 meters of the location; (c) availability of legal water and energy supply; (d) sufficient roof/terrace space and structural integrity.

(3) Horizontal collaboration with the local community, in order to secure joint efforts during the full duration of the initiative. Their knowledge, imaginaries, and needs must be placed at the core of the implementation, in order to guarantee long-term ownership.

(4) Joint development of a sustainable business model, and a local training and communication strategy. These can be done via workshops with local communities as to build from their traditional agricultural knowledge, and generating common circular economy technical knowledge.

(5) Joint construction of the aquaponic unit, including: the fish tank, the biofilter, the plant tray, the solar panel system, and the installation of the water and air pumps.

(6) Activation of the biological components in the system, including: oxygen and water flow, appropriate nitrates for correct plant growth, and the ammonia transforming bacteria.

(8) Harvesting and trading/selling the surplus.

(7) Evaluating the first cycle and interiorizing the lessons learned.

(8) Shortlisting the next territory in order to start the next cycle.

In order to guarantee long-term success of this strategy, the following sectors are targeted in simultaneous interaction: public, private, civil society and international organizations. Each one of them has its own set responsibilities and skills which make them, in their own, a relevant actor.

Private foundations. Involvement: primary, financial resources. Some of them can even provide raw materials.

- Food and Agriculture Organization of the United Nations. Involvement: primary, and data source.

In order to have a city-wide impact, scaling it up to the neighborhood level is our main purpose.

Through empowerment around a functional mid-sized prototype, which is planned, assembled, operated and harnessed by local citizens. To achieve so, it is necessary to adopt a process rather than a project approach, where horizontal trust is key.

The strategy includes the implementation of a mid-sized prototype to an existing building with its own social and neighborhood dynamics. By building the circular economy system with the local community, new social dynamics will be generated, and new actors will be inspired. The short-term objective will be to spark the replication of each individual implemented system.

Answers to judges comments in the first version:

The most crucial variable in guaranteeing our system’s long-term sustainability is true community engagement. Even if we manage to support the initial set-up and the first few month’s of functioning, we definitely do not aim at becoming the providers of maintenance nor the keepers of any sort of business secrets. On the contrary, we aim at delivering full packages of open source information to the collaborating communities. Even though this sounds like anathema to traditional business development, it will benefit all of us involved, in the long term. By providing full access to the technical knowledge that we have generated, communities will own the initial systems, and most importantly, will use their local creativity and ancient techniques to improve/adapt these systems to local conditions and challenges, in ways that theory could not predict. This includes - of course- short-term and long-term maintenance, as well as the intersection with additional  processes within the same cycle, or novel complementary cycles. Having said this, however, we do expect that the first communities where our system is implemented, will quickly develop incentives to install similar systems in neighboring communities, and to provide maintenance services to those new owners.

Urban agriculture has great potential for reducing GHG emissions and adapting to climate change. According to Clinton, N. et al. (2018) if every consolidated city around the world would embrace urban agriculture, between 100,000 and 170,000 tons of nitrogen would be sequestered. Moreover, at least 14,000 million kilowatts/hour of energy would be saved (due to efficiency gains), and the economic impact of these measures would be around 33.000 million dollars per year.

In the local context of Medellín (Colombia), the impact will also be significant in terms of reducing this city's most pressing environmental issue: air quality. According to Alsema (2017), the air pollution crisis is so severe, that it account for more deaths than gun violence, in what was once recognized as one of the world's most dangerous cities. According to the official city data, three quarters of the fine particulate matter pollution in this city comes directly from transport sector emissions (AMVA, 2017).

Thus, local integrated fish and plant farming systems have the potential for significantly reducing transport emissions around the food industry. Land use is an additional related issue. In order to allow for greater food supply, greater deforestation, water use and potential lost of biodiversity have been the norm in Colombian regions.

The environmental benefits are the core of the proposal. We have detailed environmental impacts related to GHG emission reduction and adaptation to climate change (see above). Similarly, there are specific environmental impacts related to the local context: traditional urban farms use fertilizers which eventually make it to the rivers where there are countless harmful side effects. In this closed system no harmful fertilizer runs off into the watershed. Furthermore, plastics and pollutants related to food packages become absolutely redundant and are completely cut-off.

Social benefits are also easily valued: much needed human interaction in a post-conflict society needs powerful excuses to be generated. We believe that joining humans around urban agriculture will do exactly that. On the other hand, these type of systems will break current notions about food (coming from supermarkets). By linking people with seeds, water, fish, fruits and vegetables at their homes, we can overturn the notion that food comes out of fridges and supermarkets, aiding to overcome ingrained food habits that do not provide proper nutrition.

Finally, implementing integrated fish and plant farming systems also makes sense from the economical standpoint: Aquaponics can produce faster and bigger. The rate is documented in different experiences between five to twenty times compared to extensive land farming depending on the type of food. Moreover, local economies and community processes are strengthened due to the generation and exchange of essential products such as food (primary) and sub products which can be traded or sold in-site, as locational advantages related to transit accessibility aids widening the range of traders and customers.

Similar proposals fail to generate a full closed system. Our low-cost aquaponic prototype achieves that: first and foremost, it is designed and implemented in conjunction with the local community. Secondly, circular economy is at its core: excrements from the fish feed the plants; the plant´s roots filter back the water into the fish tank; the solar panel provides the energy needed for the air and water pumps, and all inputs and outputs for the system to function can be fetched locally, and then traded or sold locally. Finally, any potential left-overs can be composted on-site.

During the process of this CoLab application, we have also decided to join forces with friends in Mexico City. The idea, then, will be to implement a similar system in Mexico City, after the first system is up and running in Medellín, Colombia. This will allow us to collect data to compare and contrast challenges and outputs in both locations.

The proposal is not free of challenges and obstacles. Some of these include:

Carlos is a yoga student, teacher and urban cyclist. Ph.D. at the University of Maastricht in 2014. Director of the IV World Bike Forum, hold in Medellín in 2015. He was granted the “Future Sustainability Leader” Prize by the Danish Think-Tank Sustainia

Isa is an animalist, permaculture and healthy nutrition student. After working in the transport industry, she realized the value of community made projects and local economy initiatives joining Del Techo, where she can advance towards such goals

Diego is an economist, urban activist, planner and farmer. He holds a Masters degree in Transport Management

Environmental engineer and entrepreneur. He started his research in acuaponics on 2014 as an alternative to generate revenue for vulnerable communities

Marianely lives in Mexico City. She works for ITDP, where she is responsible for the Ciclociudades strategy. She studied Urbanism at the Faculty of Architecture of UNAM

By:  Del Techo Colombia
Contest: Circular Economy, Economie circulaire 2018
What projects, initiatives, technologies or strategies can support cities in their transition towards a circular economy?
Follow on: