Worldwide, coral reefs ecosystems have deprived as an impacts of climate change and local stressors (Hoegh-Guldberg et al, 2007). Developing adaptive coral reefs will significantly mitigate risks from climate change and enhance the resilience of both natural ecosystems of coral reefs and coastal communities. For economic reason, Ferrario et al (2014, p.3) have calculated that “the costs of the restoration projects were significantly cheaper than costs of building tropical breakwaters.” Coral reefs also provides habitat for marine biotic, in which fisherman’s livelihoods will depend on its healthy ecosystems. More significantly, Indonesia is one of the highest country of risk with approximated distance of number of people living <10 meter elevation and <10km from reefs (Ferrario et al, 2014). Restoration of coral reefs will not only benefits economically, but thoroughly contribute to environment sustainability, coastline protection and marine livelihoods.

Climate change has already affecting the coral reefs (IPCC, 2014; Hoegh-Guldberg et al, 2007), especially in northern part of Java Island and southern part of Sumatera Island in Indonesia. Its impacts have also affected the coastal ecosystems and livelihoods of coastal communities in Semarang and Bandar Lampung city, Indonesia. The Vulnerability Assessment conducted as part of the Asian Cities Climate Change Resilience Network (ACCCRN) in both cities mentioned that fisherman and coastal communities are identified as one of the most vulnerable groups due to climate change (ACCCRN, 2010a and ACCCRN, 2010b). ACCCRN is a multi-year and multi-countries programme (see here: www.acccrn.net), initially being implemented in 10 cities 4 countries, now expanding to 40 cities including Bangladesh and Philippines. ACCCRN aims “to catalyze attention, additional funding and action on building climate change resilience at cities as a whole – and within that ensuring that the resilience of vulnerable and poor communities is also enhanced.” (Brown et al, 2012). Both cities have undertaken Vulnerability Assessments, planned City Resilience Strategies and mainstreamed it into City Development Plans. But with limited financial resources and technology, they need to understand how climate change adaptation actions can truly be effective to enhance climate resilience. 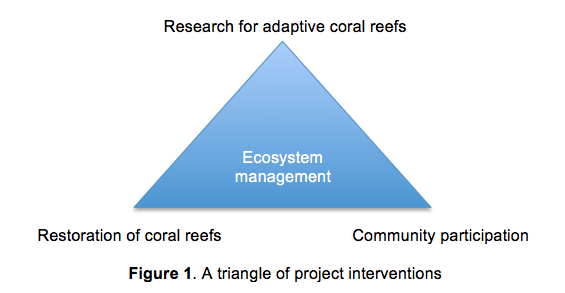 This project is a research-action project with a goal “to increase the resilience of coastal communities from climate change by restoring endangered coral reefs ecosystems.” The project will involve 3 key-milestones: (1) Research for adaptive coral reefs, (2) Ecosystem management and restoration of coral reefs; and (3) Community participation. These milestones reflect the triangle of project interventions (see Figure 1). It is important that the project considers a robust research basis to develop adaptive coral reefs and coherently maintain project implementation using an ecosystem management approach. It will also focus to engage with local communities, especially who are poor and vulnerable, as they are the key to the project success and its sustainability. Meanwhile, the project also seeks to avoid maladaptation, which could include disproportion burdens to the most vulnerable and high opportunity costs (Barnett and O’Neill, 2009). In order to build an effective adaptation, the project will considers its environmental sustainability, effectiveness of resilience measures, and community participation. The detailed activities for 3 key-milestones are explained as follows:

The first milestone focuses on researching adaptive coral reefs. The project activities involve laboratory tests, field experimentation and continuous monitoring. The laboratory tests include identification and development of full length of coded specific gene for coral reefs’ growth hormone, and cloning vectors and its expression. This genetic engineering will be follow up with field experimentation for a whole one-year cycle at both coastal ecosystems in Semarang and Bandar Lampung city. It is estimated that only 10 – 15% of coral reefs ecosystems are remained in Bandar Lampung. With a rising temperature, a few coral reefs might still be tolerant and adaptable to climate change, including Porites, Montipora and Acropora. The field experimentation is defined to test and measure the ecological resilience from the artificial coral reefs into its natural habitat. Continuous monitoring will be undertaken throughout the project implementation.

The second milestone focuses on ecosystem management and restoration of coral reefs ecosystems. Ecosystem management is defined as “an approach that attempts to involve all stakeholders in defining sustainable alternatives for the interactions of people and the environments in which they live.” (Szaro et al, 1998) It’s focuses on place-based objectives, ecosystem-based approach and human-environment interactions (Szaro et al, 1998). This is particularly important, as climate change impacts will favors across scales, beyond administrative boundary and organizations. Using an ecosystem management approach, the project will approach to build cross-jurisdictional network, undertake coral reefs restoration and knowledge management. This follows the premise of human-environment interactions within city’s institutions, agents and ecological system. The project aims to build a foundation for a goal-driven, collaborative and shared-visions approach for restoring and sustaining healthy coral reefs ecosystem, which will integrate ecological, economic and social factors (Szaro et al, 1998).

The third milestone focuses on community participation with involvement from poor and vulnerable communities in both cities. The project activities involve the capacity building and engagement from local communities at both coastal cities. The capacity building includes awareness of climate change and its impacts, coral reefs restoration and sustainable livelihoods. Community peer learning will include sharing knowledge, learning and best practices for sustainable coastal management and coral reefs restoration. Since 1997, Mitra Bentala has actively in conservation at coastal and small islands, including in Pahawang Island, Legundi Island, Tegal Island and Panjang Sub-district. Prenjak Community Group has also actively undertaken mangrove reforestation and sustainable tourism activities. The idea of community peer learning in this project is to build, exchange and accumulate shared knowledge across coastal communities and cross learning. Community outreach includes creative public communication, local community meetings and publications.

Climate Change Center (C3), Indonesia will lead the overall management for this RESPRO project implementation. C3 is a non-government organisation (NGO) registered as charity in Indonesia. Since 2009, C3 has engaged and experienced with community and youth participation in climate change mitigation and adaptation in Indonesia. Its programme includes: Berbuka Sambil Ingat Lingkungan (Break Fasting while Remembering the Nature), West Java Youth Climate Friends and several environmental awareness trainings. For this project, C3 will collaborate with Genetic and Biology Molecular Laboratory at Bandung Institute of Technology (ITB) for genetics and coral reefs research, and NGO Prenjak Community Group in Semarang and NGO Mitra Bentala in Bandar Lampung for ensuring local implementation, active participation and engage widely with the poor and vulnerable groups in both cities. At both city levels, the project team will maintain coordination with Coordinating Team for Urban Climate Change Resilience in Bandar Lampung, and Chief Resilience Officers of Semarang city.

The project is supervised by Mr Danial, ST, who is the chair and Mr Jalu Priambodo, ST who is the co-chair of Climate Change Center (C3). For the daily management of this project, Ms Feraliana, S.Si, M.Si is appointed as the project manager for RESPRO Project who is responsible for planning, managing and ensuring the delivery of project milestones and activities. The whole management team is to be set up for the overall management of the project, including project officers, lead scientist, finance and compliance officer, and project administrator.

The location for this project is in Semarang and Bandar Lampung city, Indonesia. Coral reefs ecosystems in both cities have deprived reefs due to climate change and local stressors. Both cities also have high number of poor and vulnerable communities and fisherman whom relies on fishery productions and marine livelihoods. In total, there are 2,659 fishermen in Semarang (BAPPEDA and BPS, 2015).

The potential sites for project implementation are located at:

The key benefits are two-fold: nature restoration and community resilience. Using research and ecosystem management approach, the project aims to benefits not only for the restoration of deprived coral reefs ecosystem, but also to integrate with ecological, economic and social factors. Coral reefs ecosystems in Lampung Bay have significant contribution to marine production, which estimated 1,600 fishery sites, depends on coral reef’s (Lampung Province Government, 2000). As climate change will impacts not only in short-term but also longer term which include 50-100 years, building resilience of coastal communities from climate change will require sustainable coral reefs restoration. This project aims to achieve an integrative beneficial outcome by restoring coral reefs ecosystems, increase ecological resilience and enhance community resilience through an ecosystem management, coastline protection and marine livelihoods. 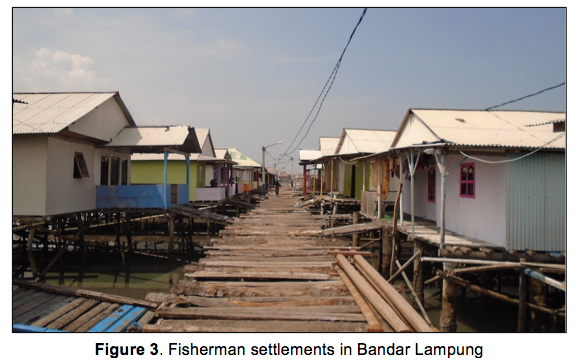 The estimated total cost for this project is 450,000 USD.

The components of project costs, include:

This is a starting project by Climate Change Center (C3) this year. We are seeking any opportunities for collaborative work and supporting funds to implement the project widely at both cities. This proposal will be shared to prospective donors in order to accumulate resources for its implementation, including to actively approach some global, regional and national climate funding streams as follows: (1) Adaptation Fund (AF), (2) Green Climate Fund (GCF), (3) UNFCCC 2017 Momentum for Change Awards, (4) Wallace Global Fund, (5) The Asia Foundation Grants, and (6) Indonesia Climate Change Trust Fund (ICCTF)

As the project will engage with environment and human systems, it will carefully and comprehensively assess its environmental impacts and risks for maladaptation. Risk assessment is the key initial measurement for mitigating both risks in the beginning of the project. The project will also apply Environment Sustainability and Do No Harm principles.

The sustainability of this project and its post-activities will be defined by the effectiveness of coral reefs restoration, its adaptive capacity to climate change and community resilience. Its success will need to be defined for short-term and long-term. At short-term, the project success is defined by its accomplishment to deliver project deliveries, successful coral reefs restoration and community participation. But in long-term, the project success is defined by its environment sustainability, ecological resilience and community resilience. As Adger et al (2015) mentioned the complexity of successful adaptation involves spatial, temporal and societal scales of adaptations actions. Within the project period of 48 months, it’s aims to build a strong foundation for achieving its long-term successfulness and effectiveness.

The total duration for this project is 48 months. Detailed timetable are available as follows:

Which will involve preparing for a detailed Project Implementation Plan (PIP), team building and networking, and logistics preparation. Period: month 1-3 for the duration of 3 months.

Which will involve undertaking laboratory tests, field experimentation and monitoring. Period: month 4-27 for the duration of 24 months.

Which will involve setting up cross-jurisdictional network, restoring coral reefs ecosystems and undertaking knowledge management. Period: month 28-48 for the duration of 21 months.

Which will involve capacity building and engagement, community peer learning and community outreach. Period: month 28-48 for the duration of 21 months.

No related proposals in relation or in conjunction with this project.

Szaro et al. (1998) The emergence of ecosystem management as a tool for meeting people’s needs and sustaining ecosystems. Landscape and Urban Planning, 40, p.1-7.

By:  Climate Change Center (c3)
Contest: Anticipating Climate Hazards 2017
How can vulnerable communities best prepare for climate-related hazards, and what new tools can be used to incentivize early action?
Follow on: