Waste-to-Energy (WTE) is the sum of processes that produce electric energy from controlled waste incineration.

Waste-to-energy (WtE) or energy-from-waste (EfW) is the process of generating energy in the form of electricity and/or heat from the primary treatment of waste.The only alternative to landfilling for treating the post-recycling MSW is by controlled combustion or other thermal treatment to recover energy, metals, and an ash residue that is suitable for road building and other construction purposes. 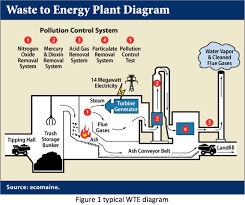 WTE facilities are based mostly on the grate combustion of as-received municipal solid wastes. Worldwide, there are over 650 thermal treatment plants, most of them in E.U., Japan, the U.S., and China. The most efficient waste-to-energy (WTE) facilities are in Denmark, the Netherlands (e.g., AEB Amsterdam), Sweden (Malmo) and Italy (Brescia). They are equipped for co-generation of electricity and heat and recover over 1000 kWh of electricity and district heating per ton of MSW processed.

Installation of the Thermal Treatment Technologies

Thermal treatment is a solution for treating nonrecyclable and nonreusable waste in an environmental and economical friendly way. Thermal treatment reduces the volume and mass of the waste and inerts the hazardous components, while at the same time generating thermal and/or electrical energy and minimizing pollutant emissions to air and water.

Municipal waste directly combusted in waste-to-energy incinerators as a fuel with minimal processing, in a process known as “mass burn.” Incineration usually involves the combustion of unprepared (raw or residual) MSW. To allow the combustion to take place a sufficient quantity of oxygen is required to fully oxidise the fuel (waste). Typically, incineration plant combustion temperatures are in excess of 850C and the waste is converted into carbon dioxide and water. Any non-combustible materials (e.g. metals, glass) remain as a solid, known as Bottom Ash, which contains a small amount of residual carbon. Waste-to-energy is one of the cornerstones of any efficient waste management system and a way to secure energy supplies for the future. Waste is turned into climate friendly energy for the benefit of both people and the environment.

Waste Incineration plants are composed of several units that have specific tasks, and together they recover the energetic content of Municipal Solid Waste.

Government policies can play a major role in creating incentives for waste-to-energy.

A. Price on Carbon/Carbon Tax

Placing a price on greenhouse gas emissions, provided the price is high enough, incentivizes emitters to reduce emissions. A price on carbon typically comes in the form of a cap and trade system, or a carbon tax.

B. High Landfill Taxes and Fees / Bans on Landfilling

C. Recognition of Waste-to-Energy as a Renewable Resource :  When governments recognize waste-to-energy as renewable, WTE projects can be eligible for incentives and programs that they otherwise would have been. In Sweden and the rest of the EU, the organic portion of waste-to-energy is recognized as a renewable resource.

D. Preference to Waste-to-Energy in the Solid Waste Management Hierarchy:   The five stages of the waste hierarchy are introduced as (1) waste prevention, (2) reuse, (3) material recycling, (4) other recycling – e.g. energy recovery – and finally disposal. According to the directive ―efficient energy recovery‖ now counts as recycling.

Subsidies can come in many forms such as production grants and tax credits, feed-intariffs, low interest / preferential loans to producers, or accelerated depreciation allowances.

GHG reduction estimated conservatively at 1 ton of CO2 per ton of MSW processed by WTE.

The major operating cost is the repayment of the capital cost of the plant. In the U.S., a new  grate technology plant may cost from $130,000 to $200,000 per daily ton, i.e., $400-$600 per annual ton of capacity, depending on the plant size. In China, a plant of the same technology and quality apparently costs one third of the above numbers. However, price of incineration plant is well described  by following empirical formula

Above 15 years evaluate the cost benefits.