Solar energy is the cleanest, most abundant renewable energy source available. The energy contained in solar irradiation that hits the earth by far exceeds today’s total energy consumption. To take advantage of this energy, solar radiation must be converted into a useful form and the output needs to be stored and distributed in order to overcome seasonal and regional variations. Solar radiation can be used passively through windows or other transparent façade systems. As for active systems, these fall into two groups – thermal use for heating and cooling purposes (solar thermal collectors) and the direct conversion of solar energy into electricity (photovoltaic modules).

Photovoltaics (PV) is the name of a method of converting solar energy into direct current electricity using semiconducting materials that exhibit the photovoltaic effect .Cities are installing photovoltaic (PV) solar electric arrays. PV becomes more cost-effective when conventional electric rates are high and ample incentives are offered by state government or local utilities. To achieve climate neutrality or deep cuts in GHG emissions, cities will need to transition as much as possible to carbon-free renewable solar energy technologies.

Large-scale installations also use combined technology, where steam is generated by concentrated solar heat, which then drives a turbine to produce power. Thermal storage systems (small scale in single buildings, large scale in communities or districts) help to bridge times without sunshine. Both photovoltaics and solar thermal systems are playing an increasingly significant role in the building sector, especially when aiming for zero-emission- and energy-plus-buildings. 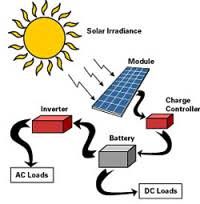 The amount of available sunlight is another important factor though PV can work well in all areas. Where there is less sun, compensate by adding panels to meet a given load. This adds cost and stretches out payback but it works. Where snow may cover panels during winter months, panels can be tilted to shed snow or PV array output can be pro-rated downward to allow for a number of weeks or months when output is nil. The performance of grid-interconnected PV is generally measured in terms of annual power production and most PV production occurs during the warmer months when days are longer and there is less cloud cover. In areas where winter days are cold and clear, angling panels to take advantage of those conditions becomes more important.

One of the world's first zero-carbon cities, called Masdar City, is being constructed in the Gulf emirate of Abu Dhabi, it is set to house 50,000 people. Construction began in February 2008. The desert city is designed to be powered entirely with renewable energy, including solar power and wind power. Construction of this large-scale project will occur in two phases. In phase one, a solar photovoltaic power plant will be built as a central energy source. Masdar is powered by a 22-hectare (54-acre) field of 87,777 solar panels with additional panels on roofs.

2 to 5 years manufacturing and installation of solar panels

By:  Hira Pant
Contest: The Smart Zero Carbon Cities Challenge 2016
How can smart technologies drive a rapid transition to zero-carbon cities?
Follow on: