Fish farming of native species, an environmentally sustainable activity as a source of food for the Siekopai in the Ecuadorean Amazon region

Our proposal is the development of a productive project that is in balance with the environment, preserves and makes the most of the existing natural resources of each of the five participating communities thus generating a safe source of protein for the families.  Additionally, 30% of the fish production will be sold to the same communities and in local markets  generating additional income for the participating families, thus developing a productive project that protects the water sources, contributes to the protection of forests; and, recuperates native fish species, by applying environmentally friendly methods that contribute to the conservation of ecosystems and sensitive areas.

The specie proposed for this fish farming Project is “cachama” (Piaractus brachypomus)  as it is from the area, it adapts easily to the ponds that are build and prepared in the communities.  This specie does not require balanced feed as introduced species such as tilapia do.  They are fed with products produced in the farms representing savings in production costs and higher benefits s for the families.

The Project is directly tied in to the national goals as described in Executive Decree (Presidential) No. 1815 which declares as governmental policy global warming adaptation and mitigation.   Also, article 14 of the constitution of the Republic of Ecuador,  recognizes the people’s right to live in a healthy and ecologically balanced environment thus guaranteeing sustainability and good living ‘Sumak Kawsay’, it  also declares as of public interest the conservation of the environment, the ecosystems, the biodiversity and the recovery of natural areas that have been degraded.

The main activities that will be carried out include:

The establishment of rules/regulations for the use and handling of natural resources (approximately 42,000 hectares of forest are involved) will be carried out.  An agreement with the communities and the indigenous organization will be the basis for this.

Meetings will be held with the beneficiary communities to train them and also make them aware of the care that should be given to the natural resources.

The project starts with a small group of fish farmers in each of five communities, after carrying out the activities for a semester and with the advantage of having tangible results, more families are integrated into the groups at each community.  This way the activities are scaled up to a larger number of families that will benefit from them which reduces the pressure on the forests and rivers of the territory.

The key actor of this Project is the provincial government, an agreement could be signed so that it supplies fish larvae of the specie that will be farmed, ‘cachama’ (Piaractus brachypomus).  The goal is to sign an agreement that will make the acquisition costs of the fish larvae accessible to the communities thus reducing costs.  Our goal is to sign a medium to long term agreement, so that the continuance of the activity is assured.

Another actor, the indigenous nationality, as the communities' legal representative will support and endorse the development of the activities that will benefit all the member communities.

The communities, as direct beneficiaries, will commit to put into practice the training they receive on the cultivation and development of the fish. They will maintain records of the implementation and upon completion of the project they will commit to continue with this productive activity.

The Fundacion Centro Lianas, has over 18 years of experience developing fish farming activities with the different indigenous nationalities and communities of the Ecuadorian Amazon area.  Their role, to assure the successful development of the project, will be to coordinate and execute the project by educating/training the families of the community; it will also issue activity and financial reports.

Our Project will be carried out in the Ecuadorian Amazon area, specifically in the biodiversity conservation area, “Reserva Faunistica Cuyabeno’ (Cuyabeno Wild Reserve) and its buffer zones.  Due to its biodiversity this reserve is one of the most important for the country and the world  The territory is located in an area of 42,000 hectares of forest which are in good condition thus offering the indigenous communities an alternative to develop a sustainable fish farming project to reduce the threats to the forest and also to maintain the balance of their ecosystems.

By implementing this fish farming Project, the communities will obtain a safe food supply source, which contributes to the conservation of the forest by reducing the pressure on the forest and fishing in estuaries and rivers in the area.  Taking into account that deforestation is equal to global warming, our project will ensure that the 42,000 hectares are preserved which will help prevent the increase of global warming.

Another benefit of the project is that it contributes to prevent the expansion of the monoculture of African Palm which is exerting strong pressure on the territory of the nationality since it neighbors with one of the largest companies that produces palm oil in the zone.

These help reduce emissions that affect global warming, by not degrading the forests bedoming a mechanism to mitigate global warming.

One of the characteristics of the project is that it is a collaborative community development project; it is carried out in a natural protected reserve, thus it is sensitive.  Our project generates an alternative livelihood for the communities of an area of great importance due to its biodiversity.

It also promotes a sustainable production system, which answers to the call for help of vulnerable communities which are extremely poor.  They seek to improve their quality of live by using, in a balanced manner, the available natural resources.

The project additionally develops actions and activities regarding the different mechanisms of exploitation, in a balanced manner, of the natural resources which are put into practice and transmitted within the family, later from family to family, and from community to community.  The project is participatory as experiences are shared.

The project's total cost is $20,200.  The communities will contribute with $10,200 and the difference needs funding.  If this project wins the contest its implementation iffs assured.  Details of the costs are: 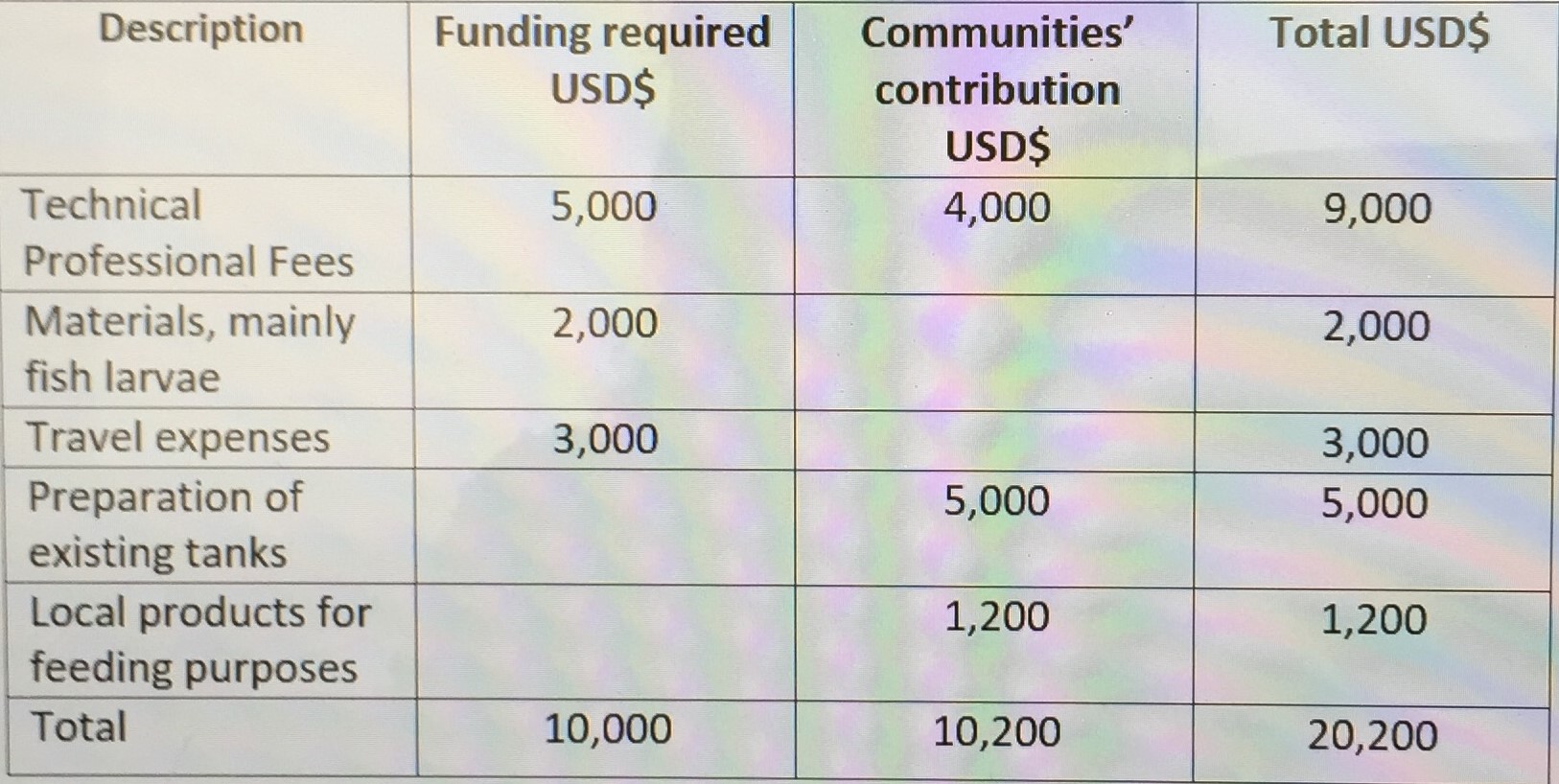 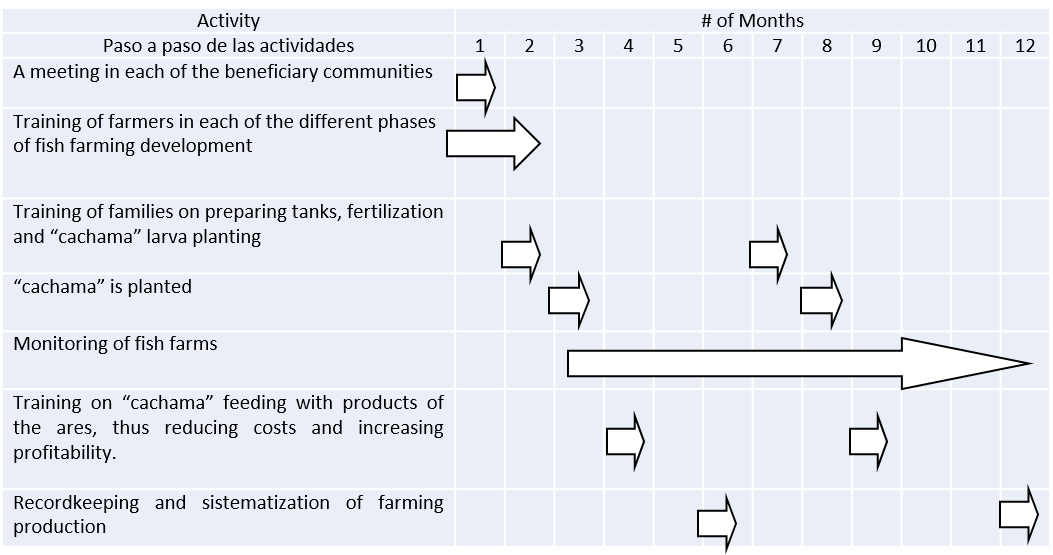 This is a short term project which will be implemented in 12 months.

Activities that will be carried out:

By:  Antonio Almeida
Contest: Land Use: Agriculture, Forestry, Livestock 2016
How can we scale-up sustainable landscape management to significantly reduce GHG emissions while ensuring food, water, and energy security?
Follow on: