The rice farmers are perceived as emitters of GHGs (mainly methane) which they are largely unaware of. Nepalese rice farmers bear the adverse effects of GHGs in terms of climate change felt in forms of erratic monsoon rainfalls, which is the main source of water for rice cultivation. Unpredictable and inadequate monsoon directly result in a rice yield decline, which is one of the reasons for an increasing trend of food imports in Nepal.

System of Rice Intensification (SRI) is a proven alternative rice growing method enabling rice farmers to cope with these adverse effects of climate change and actively participate in mitigating GHG emission. SRI relies on intermittent irrigating and draining of water to avoid anaerobic conditions and the subsequent emission of methane. Additionally, SRI is estimated to reduce fresh water use in rice cultivation by about 50%, reduce production cost and increase income for farmers which will enhance household food security.

The proposed project is located in the South of Nepal covering 55,000 ha. By changing the current rice growing (flooding) practice to the SRI method the climate resilience of more than 56’000 farmers  will be increased and 500,000 tons of CO2eq will be abated. Although, the SRI method is promising, key challenge is its wider adoption by farmers. Therefore, the program begins with creating social environment in the target communities, followed by closely supervised technical training and follow-up support during the entire rice growing season to enable them cope with the perceived risks and uncertainties while changing their age old practice.

Differently to other SRI projects, it does not rely on grants and funds, but instead the project will be developed as a carbon offset program. This will not only guarantee financial sustainability but will also increase prospects for a successful up-scaling to other parts of South-East Asia. 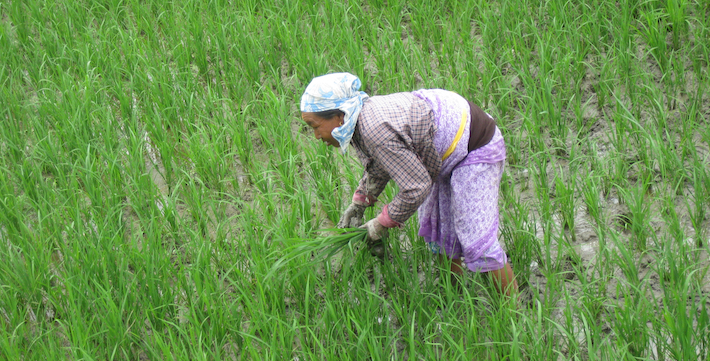 The research results indicate that globally rice field emit about 11% of the total methane. The estimated global emission for 2000 was 25.6 Tg/year. Practices such as draining rice field and applying rice straw offseason can reduce global methane emissions by 7.6 Tg/year (Yan et al., 2009).

In Nepal, rice is a staple food crop grown in 1.5 million hectares with a low average yields of 3 tons/ha and accounts for 32% of the total methane emission. In this context, it is important that the conventional rice growing method is replaced by an environment-friendly and socio-economically beneficial one. System of Rice Intensification (SRI) method is a promising option that significantly reduces methane emission, uses less water, minimizes cost of production and increases the yield. The SRI is a scientifically proven alternative rice growing method that is currently introduced in 28 countries world-wide. In conventional rice growing method, rice field is flooded with water during the growing season causing anaerobic condition and resulting in methane emission. In contrast, SRI method does not flood the rice field but maintains soil moisture keeping it well-drained and aerated that facilitates aerobic condition, thereby, reducing the formation of methane. Primarily, it focuses on developing strong root system and healthy soil conditions resulting in a robust plant physiology that is more adapted to adverse growing conditions.

The proposed project will promote System of Rice Intensification (SRI) in Nepal covering about 50,000 ha in 10 years. In this area the conventional rice growing method is practiced, producing an average yield of 3 tons/ha. Whereas, the research results of SRI method conducted by the District Agriculture Development Office (DADO - a government agency for agriculture) is 6.3 tons/ha while using about 50% less water.

Although SRI method is promising, the key challenge is its wider adoption by farmers. It requires a major ‘change’ in farmers’ attitude and appropriate supports to cover the risk involved in  the transition phase while adopting a new method, as rice farming is the livelihood base of the majority farmers. They need to learn not only new technical skills but also gain adequate experiences to master the new method.

Awareness actions - to create an enabling environment for the introduction of new SRI method. Orientation on SRI method will be conducted in the project area prior to introduction of SRI method for farmers and all relevant parties, i.e. government agency like DADO, Non Government Organizations (NGOs), media personnel, local leaders and other relevant stakeholders. It intends to creating supportive environment and hence, prepare farmers in deciding for adopting SRI method.

Training - technical capacity building of farmers and their leadership role in the scaling up activities. In each district, field level trainings will be conducted for selected leader farmers at several stages of the rice growing season. Thereafter, the trained leader farmers will be further trained and mobilized for the scaling up of SRI method to peer farmer groups in their neighborhood.

Demonstration sites – trials plots for farmers to observe and compare the physiological differences between rice grown under SRI method and conventional method. Trial plots will be established in coordination with the Farmers groups, National Agricultural Research Council (NARC) and DADO. It will help farmer see and learn from the real field situation which is more convincing than abstract learning.

Monitoring of methane emission at specific sites in the rice fields and project activities. Regular data will be collected from both sample plots (SRI method and conventional method) during the entire rice growing seasons. This will provide reliable data to standardize methane emission level from rice fields for Nepal and to estimate total amount of methane reduced annually through SRI method.

Scaling up – to create demand for low carbon rice and to introduce the SRI method to other countries. Our target is to promote low carbon rice among large retailers (e.g. Walmart, Aldi, etc.) and large food companies using rice as ingredient (e.g. Mars, Nestle, etc.) to create additional demand.

ClimateRe will coordinate and manage the project in collaboration with Department of Agriculture, farmer cooperatives and local implementing agency /NGO. ClimateRe will also be responsible to develop this project as a carbon offset program.

Department of Agriculture: The government support is vital to create supportive environment (including regulatory) for implementation and scaling up of SRI. District agriculture department office will also be responsible for promoting, and monitoring and evaluation after the project phases out.

Local NGOs: Local organization, will help in implementation of the project through capacity building, active interaction with the farmers, up scaling to other neighborhoods and monitoring and evaluation.

The actions will be taken in Nepal. Total population of the country is 28 millions of which approximately 80 % of the rural population aged 15 and above is engaged in agriculture. Agriculture sector accounts for 35 % of the GDP (approx. USD 19 billions).

In Nepal rice is planted in an area of 1.5 million hectares. Rice is the main source of nutrition for Nepalese contributing of 50% calorie intake. An average person consumes 80 kg of rice in a year.

The pilot project will be on the lowland districts of central region, Nepal. It will be initiated in three adjoining districts Chitwan, Nawalparasi and Makwanpur. These are some of the major rice growing districts that have access to less than 50% irrigation. Climate in the majority of rice producing regions is sub-tropical to tropical that is ideal for summer rice that is highly influenced by Southeast monsoon that coincides with the critical rice growing period June to September when the most water is need. Consequently, the rice farmers rely heavily on unreliable monsoon rainfall; however, with the recent climate change monsoon is erratic that often results in crop failure or poor harvest causing widespread food shortage at the household level.  Majority rice farmers are rural subsistence small land landholders (average land size < 0.96 ha per family). In Nepalese subsistence farming system, family members are the main source of labor force for rice cultivation. The farmers grow wide varieties of rice both for consumption and for sale and any excess are sold for cash income. 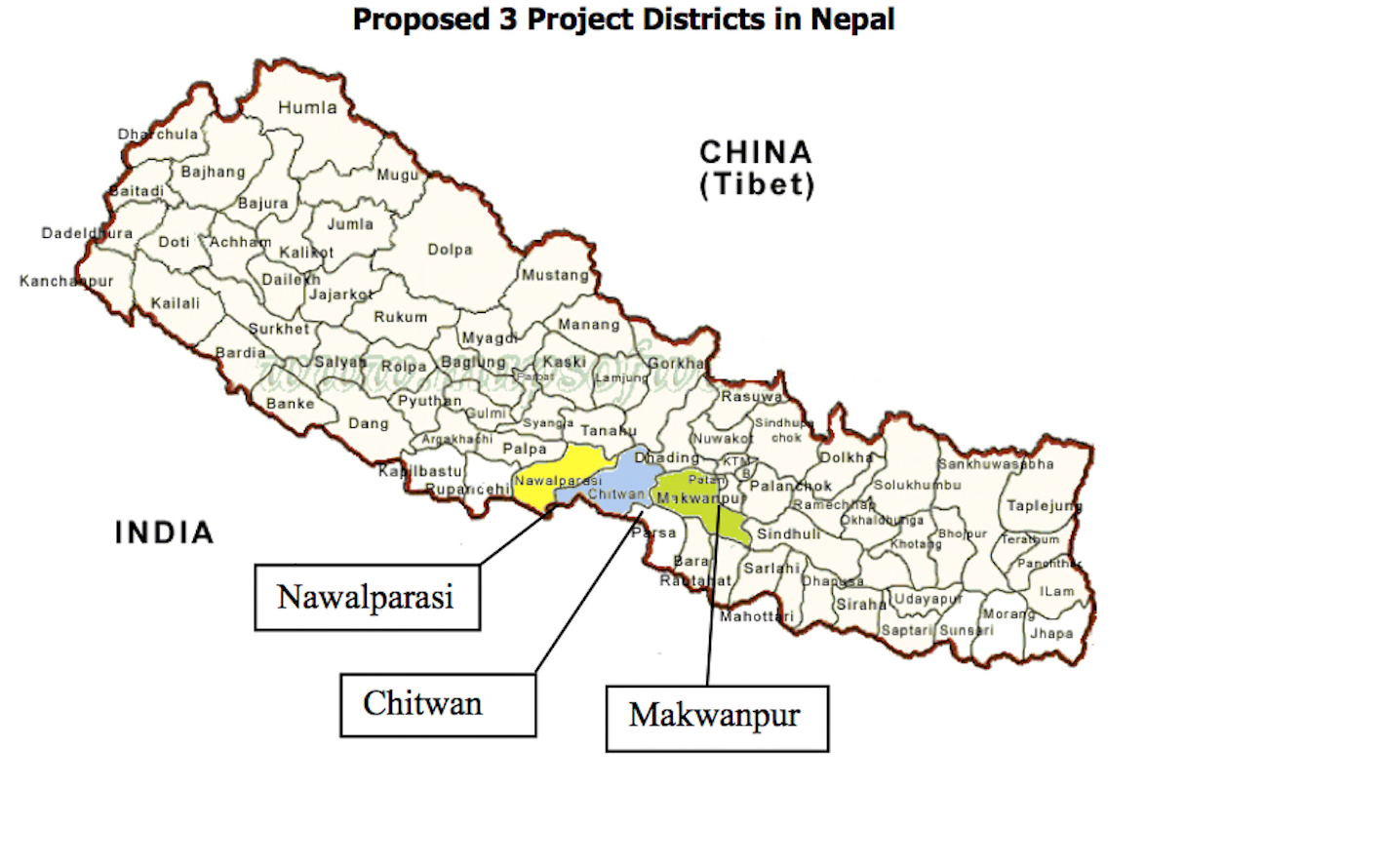 The project can be up-scaled to other rice growing countries in Asia. Paddy rice cultivation accounts for 0.52 GtCO2eq /year methane production (Smith et. al., 2014). Asia is the largest contributor and is responsible for 90% of global emissions. Emissions from rice cultivation is steadily increasing and if the current agriculture practices are not changed the annual contribution to global GHG anthropogenic emissions will increase by 0.4% each year.

The estimated cost of the project is 1.5 million USD for 10 years and 9 months. It includes the cost for project implementation and coordination and for the accreditation as a CDM project (CDM UFCCC, 2016). Main project cost (560,000 USD) will be spent on capacity building and trainings of the farmers as well as institutional arrangement to raise farmers’ capacity.

The proposed 10 years project will be developed as a CDM project which will co-finance the project through revenue generated from sale of CO2 credits. Hence, the project needs initial funding of approximately 450,000 USD for first 3 years and thereafter, the remaining 7 years will be financed through carbon revenue. The surplus of carbon revenues after completing 10 years project period will be used to launch new projects in other countries in South-East Asia. Based on the expected price of CO2 at 5 USD/ton on the voluntary carbon market, we assume that we will be able to generate 2.5 million USD revenue.

By:  ClimateRe
Contest: Land Use: Agriculture, Forestry, Livestock 2016
How can we scale-up sustainable landscape management to significantly reduce GHG emissions while ensuring food, water, and energy security?
Follow on: