MIT solutions to global warming will bring affordable clean energy to billions of people, especially in the developing world. 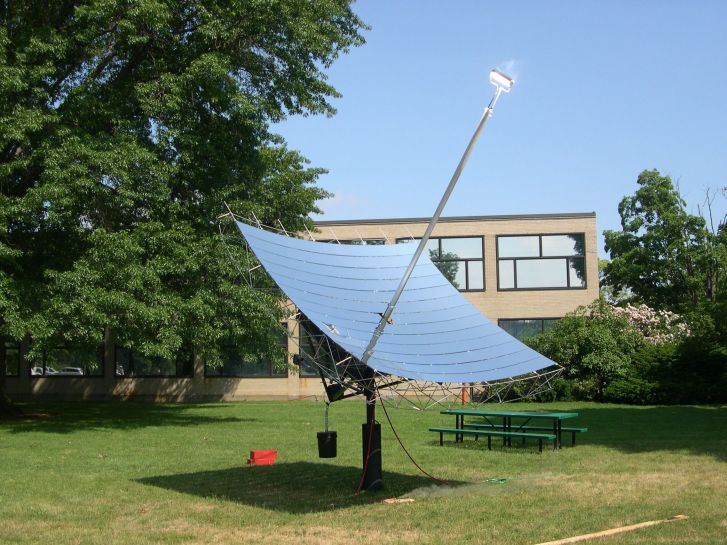 Solar is by far the largest energy source on earth, much larger than all fossil fuel reserves combined. One square meter of sunlight in Colorado climate is worth 2000 kWh per year. One m^2/year (the size of a folding card table) is worth more than one barrel of oil per year.

Solar glass mirrors are 96% efficient and cost $25/m^2 at scale. All glass solar concentrators cost about the same. Solar dishes are the most efficient at 91% or 80% with average dirt in the real world. Solar dishes can melt steel. Research indicates solar dish cost at about $100/m^2, less than $0.20/Watt. These numbers demonstrate solar energy cheaper than all types of fossil fuels.

Solar steam can be used for district heating. With seasonal heat storage city-wide heat and hot water can be supplied all day the whole year. Whole cities can be 100% solar heated from solar collectors located 30 miles away. http://www.dlsc.ca/borehole.htm

Solar concentrators are like airplanes and cars. They will evolve. It is a multi-trillion dollar global market.

Create MIT graduate engineering group to take possession of solar technology and carry it forward into the future.

The goal is industrial solar development, testing, and global dispersal.

What is the cost of solar energy displacing carbon emissions?  That is the guiding question of our research.

What is the cost of solar collectors at scale, like that of a billion cars and a billion buildings?

What is the best performance of solar collectors? 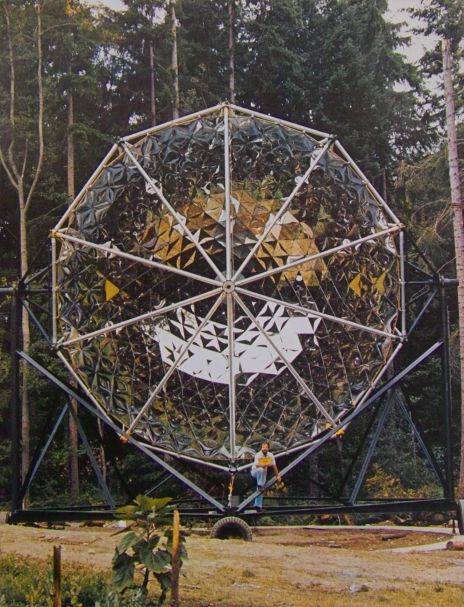 Glass substrates were made from sheet aluminum stretched formed into compound curves like the nose of a commercial jet plane.  We worked with Boeing engineering examining hammer presses using male/female graphite dies, very expensive tooling.  Hammer press stretch forming has a five foot size limit due to the friction across the die blank.  We then created the radical innovation of clamping sheet metal across the female die and dropping the assembly into very deep water at Crater Lake.  A million pounds of force stretched the metal into the die.  The hammer press and die size limits were eliminated.  Later applications of this new idea were tested at a deep water submarine research facility off Fox Island in Puget Sound.

In another area of research, there were many, we explored using dimensionally large fluid optical wave guides to transport high-intensity sunlight from the focus of a mirrored 3 meter satellite dish to loads in a building. The applications included lighting, heating, and high-intensity photovoltaic cells (type III-V).  Results showed high attenuation losses and high costs so the effort was abandoned.  AB Lovins then asked about small dish cost and we found that cost per aperture area of the small dish was three times less than our "low-cost" big dishes.  We were very surprised and disappointed.  The big dish plans had to be abandoned after all that work, time, and money. Small dishes were so much better.  It was a breakthrough in solar economics.

In addition to size, the small dish showed another breakthrough.  The flat glass mirror slats were flexed into a curve with tension screws at edge mid points.  The curve was a perfect parabola with excellent optics.  Only the corners of the mirrors touched the substrate.  This eliminated the need for glass mirror substrates.  Hydroforming sheet metal into stretch-formed compound curves was abandoned, a significant cost reduction in materials and tooling. A patent claim was allowed for the invention of flat mirror curvature without substrates. http://www.harbornet.com/sunflower/patent.doc

The small round dish was redesigned as square dish to leverage flexing long mirror slats.  Slicing a paraboloid with any planes parallel to the axis makes all identical curves for all layouts.  Only paraboloids have this property. The method of building a paraboloid space-frame from all identical parts was allowed a patent claim.   This simple design innovation enabled significant cost reduction in labor and tooling. 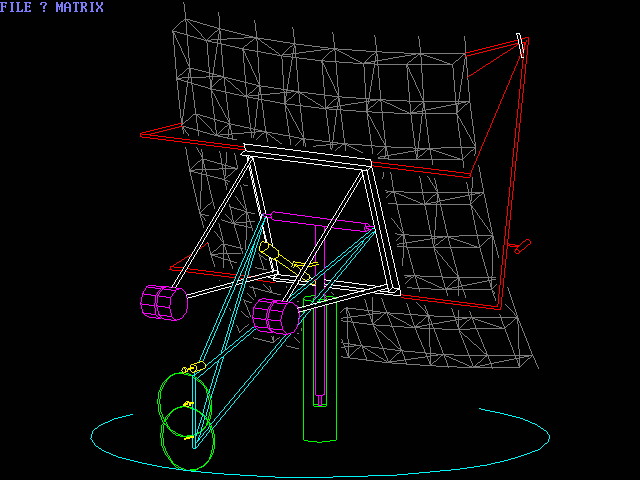 We created new materials properties from the crystalline modification of spinel during calcination. This innovation has wide applications in the marine, irrigation, and solar industries.  We could assign IP to MIT in exchange for engineering support.

In an effort to solve the problem of spiders crawling on shadow band sensors we discovered a new hyper accurate solar tracking technology.  A shadow band sensor is typically a 10 cm wall separating two photo transistors.  As the moving sun makes a shadow on one side sensor the solar tracker moves to balance the light.  When placing a small glass sphere above a thin sheet metal wall with the sphere focus at the top edge of the wall then the 10 cm wall appears 3 meters high.  This makes the shadow band super accurate at ± 0.005 degrees, important for uniform flux on high-intensity photovoltaic cells, HIPV type III-V. Each eye has two photo transistors, a thin sheet metal wall, a 30mm glass ball, housed in a 1 inch by 3 inch long PVC pipe, all parts at a total retail cost less than $5. 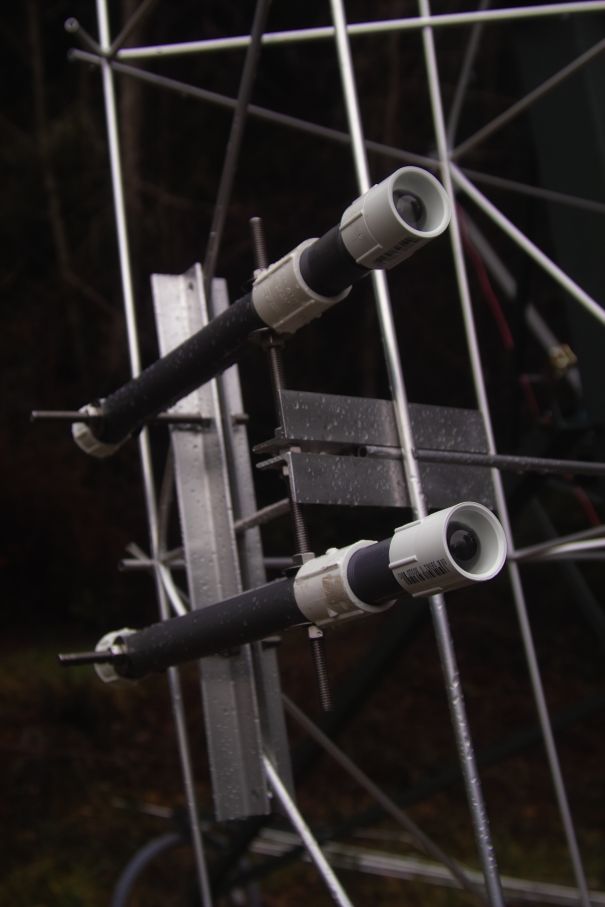 The flux of a dish can melt rocks.  Ground torching can be a fire hazard. So we built a micro to mitigate this danger.  It is important that the dish track the sun accurately in sunshine or approximately through clouds. The dish stows up if there is a tracking problem or high winds. The software reads time & date, dish position via accelerometers, motor functions, wind speed, and shadow band sensors.  The PIC also reads from memory the previous sunny day solar position, measures movement if a motor is on, resets the clock to solar noon when sun pointing due south, calculates solar position anywhere on earth, then takes the appropriate actions. The dish is a dangerous autonomous robot within a 4m radius.  Turning the power off and on will stow a field of dishes for safety.  Turning the power off, waiting 10 or more seconds, then turning the power on resumes tracking. http://www.harbornet.com/sunflower/PCB.pbp 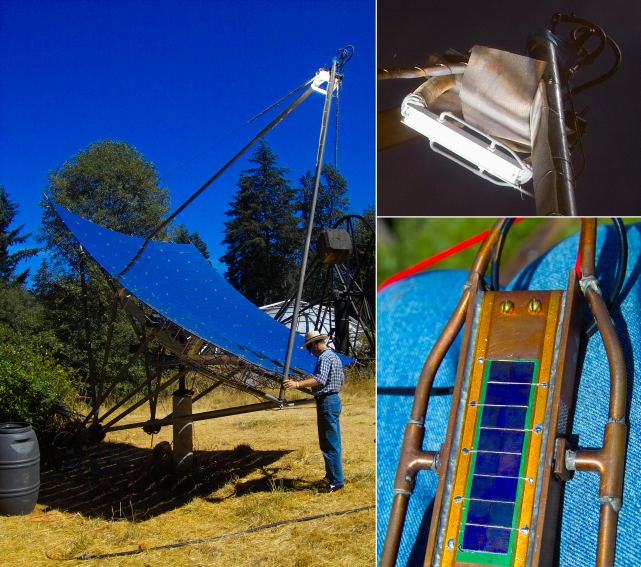 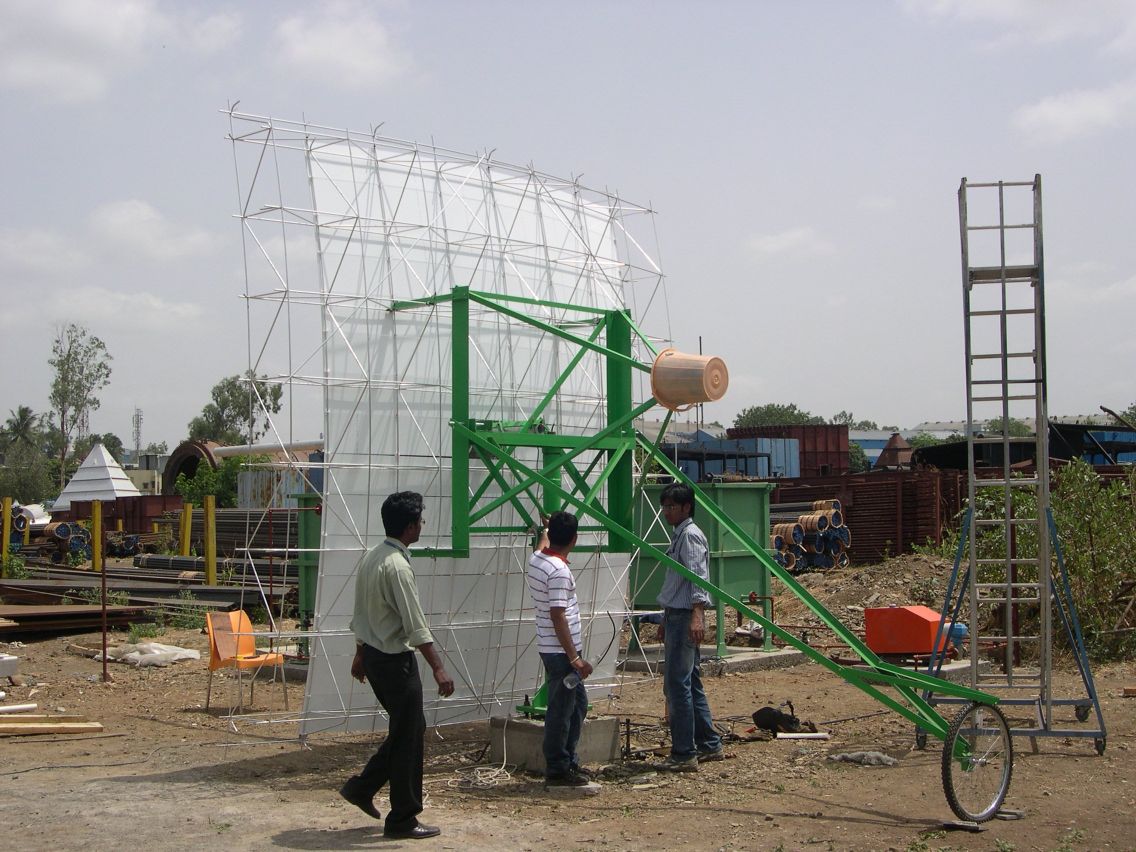 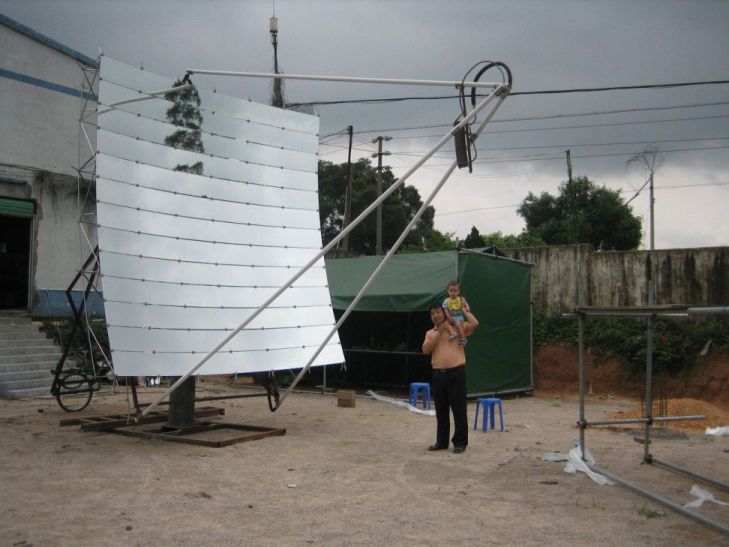 The dish was 12 by 12 foot square with 12 foot mirrors.  Twelve foot glass ribbon width is only available in North America which caused problems for India and China. So the dish was redesigned approximately 16 by 16 foot square with two rows of 7 foot glass mirrors.  India then constructed a second dish.  India boiler codes will not allow copper tubing so a steel receiver was developed.  The micro software was upgraded for equatorial solar tracking.

A term sheet for $5.5mn was signed by a Boston area venture capital firm for an MIT solar dish start-up company, RawSolar, but the term sheet was not honored due to the 2008 market crash.  RawSolar defaulted on engineering costs at Forell Structural Engineers, San Fransisco, and was disbanded.

The new dish design is larger and needs structural engineering for foundation, steel, and aluminum under various load conditions.  The results of this engineering will be the most significant driver of cost and most important for reliability. 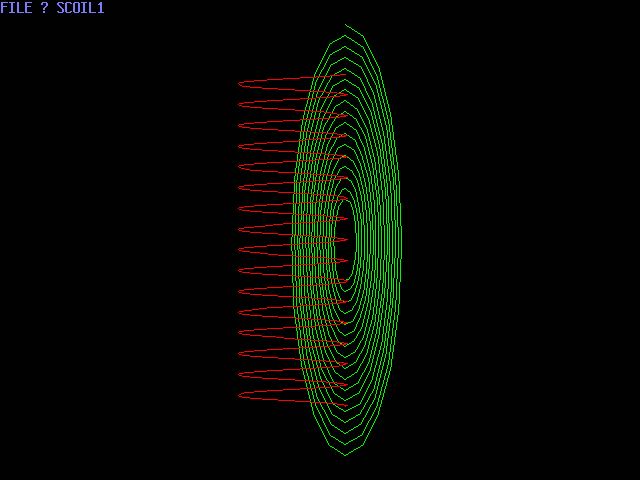 Mirror stack research is needed for enhanced durability.  We had an unique experience at MIT.  The mirrors delaminated the first winter.  The cause is unknown.  It could be the novel replacement of copper with palladium by Guardian, not a good idea.  Or it could be the wicked winter weather in Boston.  An ice storm may have adhered ice to the mirror backs then chilled to subzero temperatures and the thermal coefficient of expansion difference between glass and ice pulled the silver from the glass.  Tests are needed in this area.  Teflon-like paint may be a solution.  https://www.technologyreview.com/s/421690/surfaces-that-keep-the-ice-away/  Another area of concern is ultraviolet degradation of paint binders.  Adding pigment Color Index 36 (blue-green) will totally protect paint from UV.  Since the OPEC oil embargo NREL has conducted decades of glass mirror durability research and can help with mirror stack ideas.  PPG is a paint and solar mirror manufacturer.   I would recommend their 2mm by 7 foot low-iron glass mirror.  BrightSource may share mirror technology, maybe even supply a sample heliostat.  We tried to make heliostat and trough technology work.  Dishes are fundamentally better.

Micro-controller printed circuit boards are needed for a dozen beta test dishes.  Printed circuit boards for solar dish tracking is the one area of technology transfer that requires the most hand holding.  This is a vertically integrated item and could be the main source of revenue.  The other sources of revenue could be consulting engineering and technology licensing.  The main objective is global carbon emission mitigation.  Revenue is only for engineering sustainability. 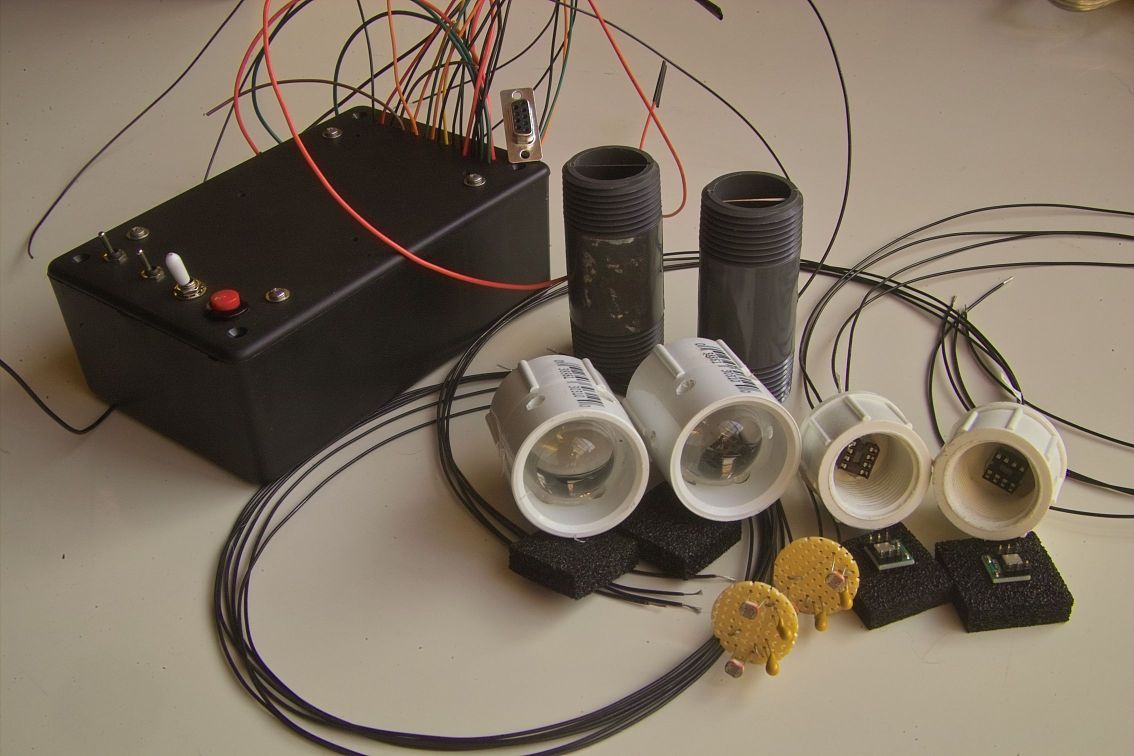 Global technology transfer for rapid expansion of local production is the main goal.

-- Expanded addenda at the end of this tab below References.--

Sunflower will assign patents and IP to MIT.

If minimum 20 million m^2 deployed then CO2 displacement would be 5 million metric tons per year.

Local energy in both developing and developed economies, jobs, security.

Rate and scale of dispersal is unknown, could be fast and huge.

Most of the IPH systems tested were closed-loop deaerated water plumbed with conventional steam pipes and heat exchangers connected to the inputs of existing boilers.  The boilers then controlled temperatures and flow rates to loads.  This is also done in India.

District heating is a sustainable energy delivery system.  Sweden recently connected nearly all buildings to a new polymer heating grid, then interconnected whole cities together and deployed borehole seasonal heat storage.  They found it simple to connect large solar arrays to the return heat pipes.  Such systems are new to North America.  This is a link to a system in Northern Alberta. http://www.dlsc.ca/index.htm

Stanford, for example, wanted six dishes hooked to a dorm for evaluation then thousands of dishes on their land connected to their district heating grid.  They are currently buying low carbon electricity from the utility for low temperature heat.  Universities will be very aggressive early adopters of solar steam for district heating and cooling.

CLIMATE - Cloud cover is much more important than latitude.  Without clouds everybody would get about the same energy per year.   Seattle gets about half the direct sun of Phoenix which requires twice the aperture area for similar performance, same as moving Seattle to Phoenix.   NREL has an excellent tool for making climate performance calculations. http://rredc.nrel.gov/solar/old_data/nsrdb/1961-1990/redbook/atlas/

Our business plan to supply open source solar steam technology comes directly from our market research.  It is the only way to scale quickly at low cost.  The plan is to build sample concentrators then publish engineered blueprints online.  Consulting engineers would be available to assist international technology transfers, likely involving a lot of global travel and tech improvements.

By:  sunflower
Contest: Industry 2016
How can industry innovate to meet the challenges of sustaining a healthy climate while meeting societal demands for goods and services?
Follow on: