Solar energy is the cleanest, most abundant renewable energy source available. The U.S. has some of the world’s richest solar resources. Today's technology allows us to harness this resource in several ways, giving the public and commercial entities flexible ways to employ both the light and heat of the sun.

Solar thermal energy (STE) is a form of energy and a technology for harnessing solar energy to generate thermal energy or electrical energy for use in industry, and in the residential and commercial sectors. The first installation of solar thermal energy equipment occurred in the Sahara approximately in 1910 when a steam engine was run on steam produced by sunlight. Solar thermal collectors are classified by the United States as low-, medium-, or high-temperature collectors.

High-temperature collectors concentrate sunlight using mirrors or lenses and are generally used for fulfilling heat requirements up to 300 deg C / 20 bar pressure in industries, and for electric power production. Two categories include Concentrated Solar Thermal (CST) for fulfilling heat requirements in industries, and Concentrated Solar Power (CSP) when the heat collected is used for power generation. CST and CSP are not replaceable in terms of application. The largest facilities are located in the American Mojave Desert of California and Nevada. These plants employ a variety of different technologies. The largest examples include, Ivanpah Solar Power Facility (377 MW), Solar Energy Generating Systems installation (354 MW), and Crescent Dunes (110 MW). Spain is the other major developer of solar thermal power plant. The largest examples include, Solnova Solar Power Station (150 MW), the Andasol solar power station (150 MW), and Extresol Solar Power Station (100 MW).

Concentrating solar power (CSP) plants use mirrors to concentrate the energy from the sun to drive traditional steam turbines or engines that create electricity.  The thermal energy concentrated in a CSP plant can be stored and used to produce electricity when it is needed, day or night. Today, over 1,400 MW of CSP plants operate in the United States, and another 390 MW will be placed in service in the next year.

Parabolic trough systems use curved mirrors to focus the sun’s energy onto a receiver tube that runs down the center of a trough.  In the receiver tube, a high-temperature heat transfer fluid (such as a synthetic oil) absorbs the sun’s energy, reaching temperatures of 750°F or even higher, and passes through a heat exchanger to heat water and produce steam.  The steam drives a conventional steam turbine power system to generate electricity.  A typical solar collector field contains hundreds of parallel rows of troughs connected as a series of loops, which are placed on a north-south axis so the troughs can track the sun from east to west.  Individual collector modules are typically 15-20 feet tall and 300-450 feet long. CLFR uses the principles of curved-mirror trough systems, but with long parallel rows of lower-cost flat mirrors.  These modular reflectors focus the sun's energy onto elevated receivers, which consist of a system of tubes through which water flows.  The concentrated sunlight boils the water, generating high-pressure steam for direct use in power generation and industrial steam applications. 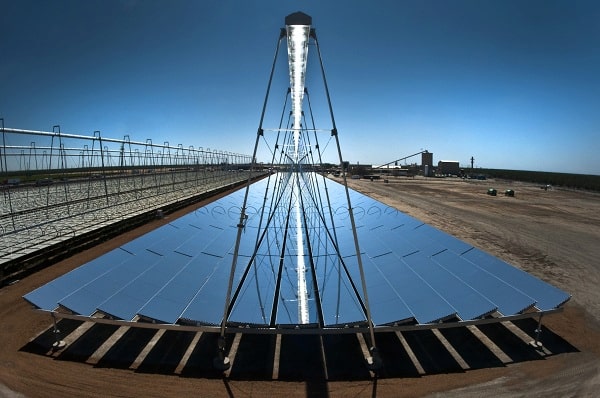 Power tower systems use a central receiver system, which allows for higher operating temperatures and thus greater efficiencies.  Computer-controlled flat mirrors (called heliostats) track the sun along two axes and focus solar energy on a receiver at the top of a high tower.  The focused energy is used to heat a transfer fluid (over 1,000° F) to produce steam and run a central power generator. 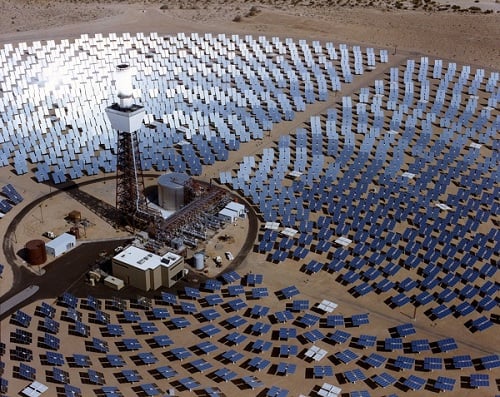 Mirrors are distributed over a parabolic dish surface to concentrate sunlight on a receiver fixed at the focal point.  In contrast to other CSP technologies that employ steam to create electricity via a turbine, a dish-engine system uses a working fluid such as hydrogen that is heated up to 1,200° F in the receiver to drive an engine such as the Stirling engine.  Each dish rotates along two axes to track the sun. 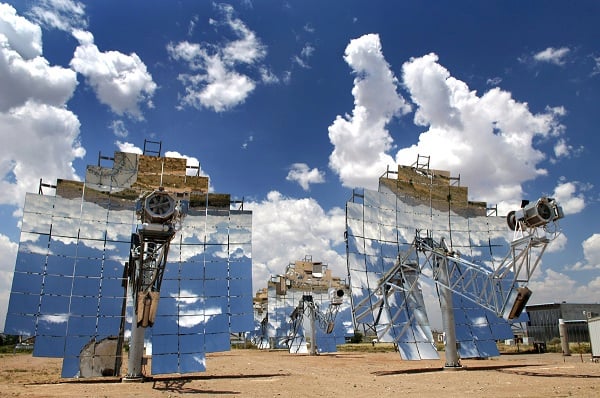 Ouarzazate, February 4, 2016 - Today, Morocco launches the first phase of the largest concentrated solar power (CSP) plant in the world.  When fully operational, the plant will produce enough energy for more than one million Moroccan households.

Inaugurated officially today by His Majesty Mohammed VI of Morocco, the solar plant underlines the country’s determination to reduce dependence on fossil fuels, use more renewable energy, and move towards low carbon development.

The three-plant Noor-Ouarzazate CSP complex called NOORo expects to achieve over 500 megawatts (MW) installed capacity, ultimately supplying power to 1.1 million Moroccans by 2018. It is estimated that the plant will reduce the country’s energy dependence by about 2 and half million tons of oil, while also lowering carbon emissions by 760,000 tons per year.

Concentrated solar power is such a promising technology that the International Energy Agency estimates that up to 11 percent of the world’s electricity generation in 2050 could come from CSP. This is especially true in the Middle East and North Africa, a region with abundant solar resources and high hopes of eventually helping to meet the E.U.’s demand for energy.

“With this bold step toward a clean energy future, Morocco is pioneering a greener development and developing a cutting edge solar technology,” said Marie Francoise Marie-Nelly, World Bank Country Director for the Maghreb, “the returns on this investment will be significant for the country and its people, by enhancing energy security, creating a cleaner environment, and encouraging new industries and job creation.”

Despite the potential of CSP, relatively high technology costs, when compared to fossil fuel alternatives, deter utilities from investing. Concessional and public financing were key to lift this project off the ground. The Moroccan Agency for Solar Energy, the government agency focused on the country’s solar ambitions, secured over $3 billion needed for the Noor-Ouarzazate complex from the African Development Bank (AfDB), the Climate Investment Funds (CIF), European financing institutions and the World Bank.

“This launch shows that the low-cost, long-term financing provided by the CIF can serve as the spark that attracts the public and private investments needed to build massive CSP production facilities at an attractive cost for countries interested in developing solar energy,” said Mafalda Duarte, Head of the Climate Investment Funds.

Trailblazing projects on the African continent, like the Noor solar plant, are proving the performance of CSP. As well as the environmental benefits, the plant results in new, local jobs, and can lead to a high-performing sustainable energy economic sector for Morocco.

Yacine Fal, AfDB resident representative in Morocco, said: “Noor solar complex is part of the innovative operations of AfDB in the energy sector in terms of financing and technology. It stands to serve as an example for Africa and the world about how to create effective pathways to greener and more inclusive economies through renewable energy”.

Solar heating & cooling (SHC) technologies collect the thermal energy from the sun and use this heat to provide hot water, space heating, cooling, and pool heating for residential, commercial, and industrial applications. These technologies displace the need to use electricity or natural gas. Today, Americans across the country are at work manufacturing and installing solar heating and cooling systems that significantly reduce our dependence on imported fuels. 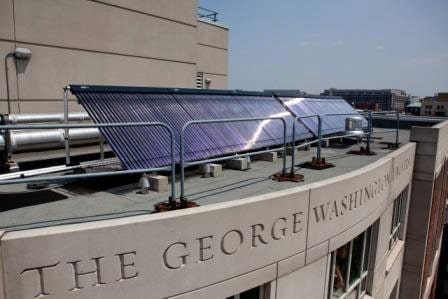 ØSolar is a Secure Investment

ØSave Thousands of Dollars

SHC equipment is mostly common, recyclable, nontoxic building materials like copper, aluminum, steel, and polymers. A residential solar water heating system costs $6,000 to $10,000. A commercial or industrial system can run from $20,000 to $1,000,000 depending on size and the heating or cooling load. Depending on application, location, and financial incentives, the payback period for commercial systems can be likewise as low as 4–8 years.The payback depends on the location, the type of technology, and the local incentives, but it is generally three to seven years. Solar thermal with incentives is around $0.06 per kilowatt-hour and cost-effective in places that use oil for heating.

The International Energy Agency (IEA) estimates a current investment cost for CSP plants between USD 4,200-8,500 per kW, depending on local conditions.

1-5 year for manufacturing and installation.

By:  Naresh Bhatt
Contest: Industry 2016
How can industry innovate to meet the challenges of sustaining a healthy climate while meeting societal demands for goods and services?
Follow on: