Regulate industry globally so all new air conditioners have a minimum of 25ºC(77ºF). Reset existing equipment to comply this new standard.

With Climate Colab's support, suggest to COP22 leaders that governments all around the world set a new global regulatory policy for all Air Conditioning manufacturers:

“When working in "cool mode", all new AC residential equipment must have  a manufacturer limited setting of 25ºC (77ºF)  instead of 18ºC  (64ºF) in their remote controls. New equipment should comply with this regulation and all existing AC remote controls should be replaced reset to this new standard.”

Relative humidity is very important factor for human comfort.According to the following diagram by Hoyt, Schiavon, Piccioli, Moon, and Steinfeld  (2013), 25ºC (77ºF) is a temperature that is inside the comfort zone for almost all values of  relative humidity. 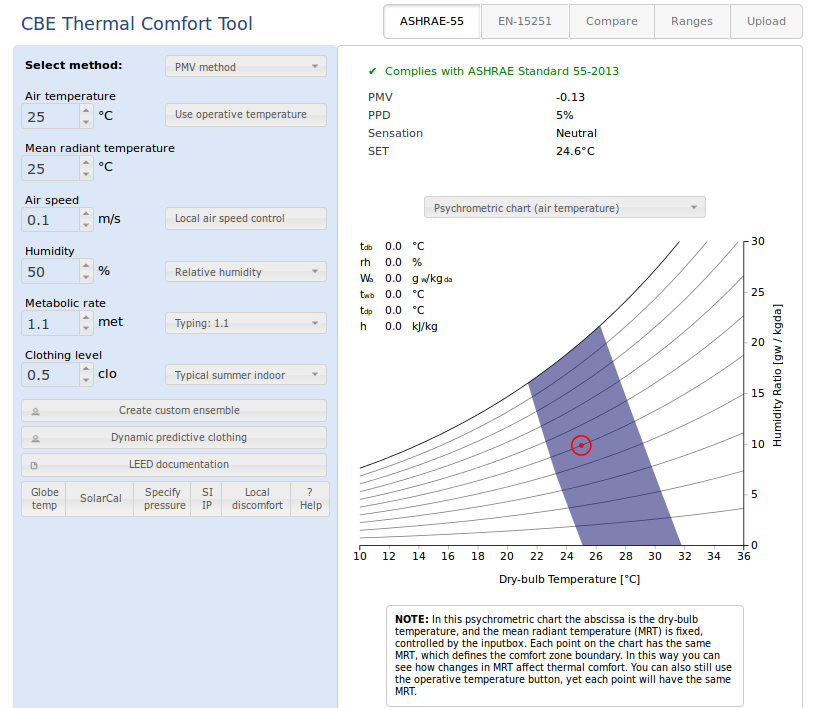 Meadows showed in Leverage Points: Places to Intervene in a System (Meadows, 1999) that changing the system's goals is a very high impact intervention. We think that this is something new, using the optimal 25°C (77°F) has already been suggested, but setting it as a temperature goal by COP22 and country governments is something new that might have a very important impact on global sustainability.

The reason is that many people do not understand the impact of changing only two or three degrees in the AC setting remote controls. Energy savings show great sensibility: just changing the temperature from 23 to 25°C multiplies savings 350% from 4% to 14%. 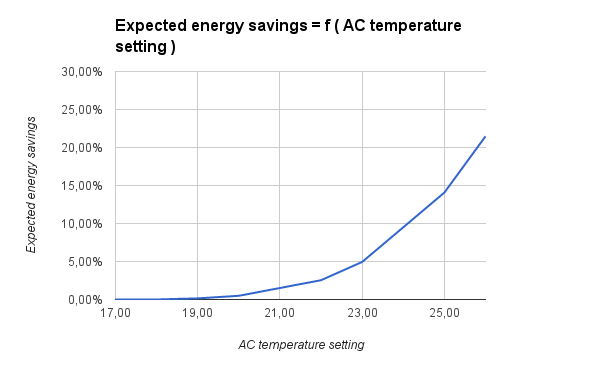 Limiting the possibility for users setting suboptimal temperature settings is part of the novelty of our proposal, recommending a new"Poka Yoke" approach to the use of residential air conditioners. (ASQ, 2016) 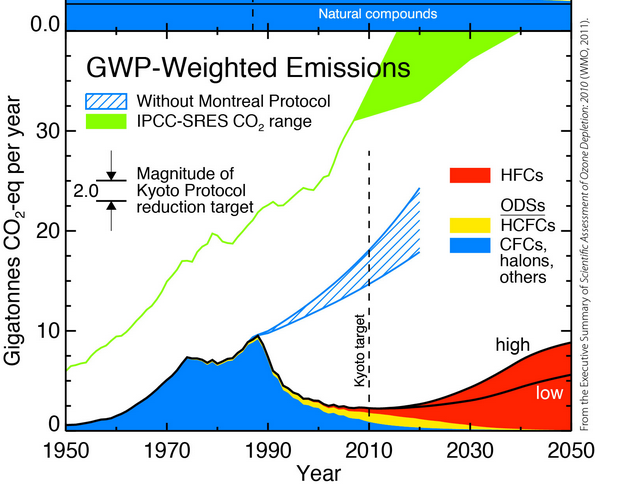 and from US AC industry (Farr, 2012) suggest that this process would take between 15 to 20 years. 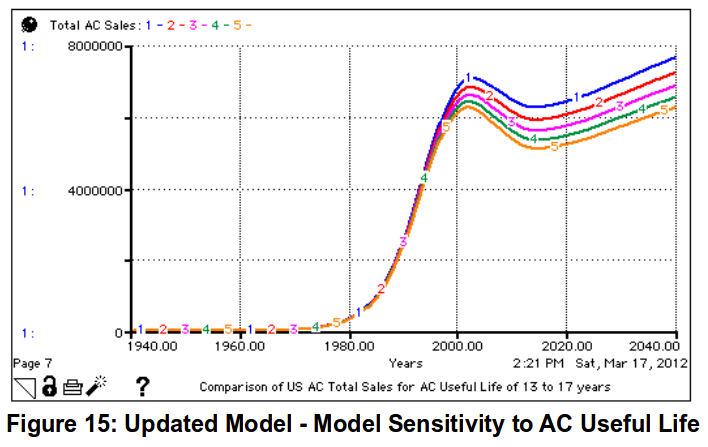 The proposal will save 14.07% of residential AC energy consumption worldwide, or 1.68 % of global energy supply, according to our calculations this will amount to 327 TWh/year of energy savings worldwide and would amount to 29500 Million USD saved per year.

Novelty and Rationale for these actions:

We think that the novelty of this proposal is related to that its simplicity might generate great change, and that it is based on several paradigm shifting ideas, for example it is said that Henry Ford wrote in his autobiography, "Any customer can have a car painted any color that he wants so long as it is black". (Ford, H., Crowther, S., 1922)

As Ford showed with his successes, normalization can have a huge impact in a system, and more so if the system is set to an optimal point. So setting all residential air conditioner remote controls to an optimal temperature can have a profound impact on climate change reduction efforts.

In terms of air conditioners, the Henry Ford quote would be "you may set the temperature of your AC to any temperature as long as it is 25°C (77°F)", which is the optimal AC temperature setting.

Part of the novelty of our proposal also comes from using the "Poka Yoke" approach to AC climate change related issues.

“Also called: poka-yoke, fail–safing. Mistake proofing, or its Japanese equivalent poka-yoke (pronounced PO-ka yo-KAY), is the use of any automatic device or method that either makes it impossible for an error to occur or makes the error immediately obvious once it has occurred.” (ASQ, 2016)

The action of setting all residential air conditioners in the world to function with an optimum 25°C (77°F) temperature follows the Poka Yoke philosophy, preventing the use of air conditioners in a suboptimal manner, thus protecting the environment, with the potential of saving 194 MtCO2e/year emissions, as well as 327 TWh/year, and approx. 29500 Million USD/year worldwide:

Finally, here is a video that shows some of these ideas

1) With the help of ONG's and Climate Colab influence at COP22 for worldwide adoption of the new global industry policy:

2) COP22 adopts the policy and recommends each country's government to implement it.

3) Country governments include this new regulation as part of their INDCs.

At the same time, country governments pass legislation / regulations requiring that all new residential AC remote controls should have a minimum 25C(77F) setting and that all existing remote control equipment should be reset with this new industry standard.

At the same time, manufacturers replace existing AC controllers with the new regulation complying ones.

6) Customers pay for the new modified ACs and also pay for the reset AC controls, because they will benefit from the energy savings, cost reductions and better quality of service.

Energy distribution companies could help to absorb the resetting cost because this reprogramming will avoid doing more investments for expanding the carrying capacity of their distribution network. 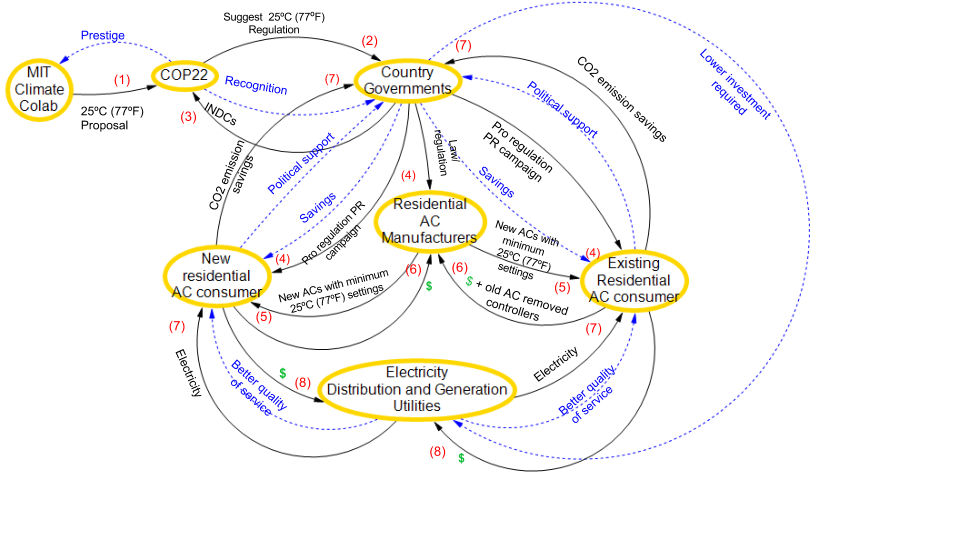 1) Climate Colab influences COP22 leaders so that each country's government include this proposal in their INDCs.

3) Country governments include the proposal in their INDCs and regulate each country's industry to comply with the 25C(77F) minimum setting requirement.

4) Governments enact a PR campaign to show the public the benefits of adopting the 25C(77F) AC minimum setting standard.

5) All Air Conditioner manufacturers in all countries should manufacture all new equipment with this new industry standard.

6) People buy these new ACs and have their existing ACs controls rest in order to save money, energy and to contribute preserving the environment.

7) All electrical energy distribution companies could help reprogram existing controllers because it lowers their infrastructure investment requirements during demand peaks and because having a lower demand improves the quality of service.

1) COP22: Global agreement on the proposal supported by Climate Colab

2) In each country: Local governments should enact regulations so that each manufacturer implements it locally. People comply with the reprogramming of the old AC remote controls. 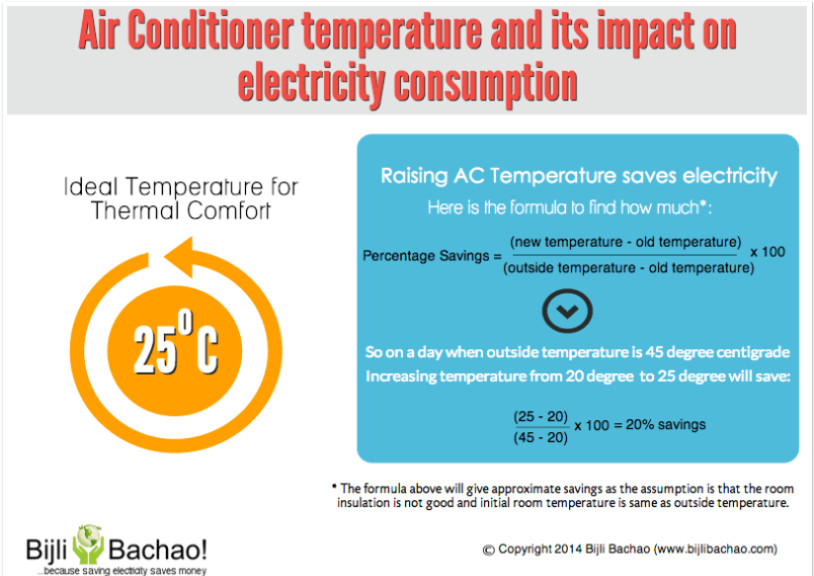 Amount of CO2 emitted worldwide from fossil fuels during 2012:

Percentage of CO2 emissions due to energy sector

Amount of CO2 emitted due to the energy and heating sector:

Percentage of CO2 emissions due to Residential Air conditioning:

5) Better quality of service. For example, in cities, like Buenos Aires, with demand excesses it would produce less energy shortages and blackouts.

7) Better government image and reputation. Government benefits from an improved image in relation to an improved quality of service by energy distribution utilities.

8) Savings can be reallocated to other clean energy initiatives!

9) It is cheaper for energy distribution companies to pay for the AA remote control reprogramming cost, because they will avoid doing more investments in expanding the carrying capacity of their distribution network.

2) Cost of resetting and replacing of all existing remote controls.

3) Cost of the PR Campaign communicating the value proposition of this initiative.

4) Maybe some media would do this communication free in some countries because of the positive impact in their brand value.

5) Communication costs could be part of the government's political campaign!

1) Include it in 2016 COP22 negotiations in the energy efficiency think tank, and get it approved by COP22's end. Include it in next global agreement.

2) In 2017 all AC manufacturers should reset the remote controller to be manufactured.

3) At the same time, remote control resetting starts in all countries

5) By 2030 almost 90 % of residential ACs comply with the new proposed standard.

By:  Kiri
Contest: Industry 2016
How can industry innovate to meet the challenges of sustaining a healthy climate while meeting societal demands for goods and services?
Follow on: