Climate change is adversely impacting global ecosystems and a major concern for societies around the world. While many groups are doing their best to adapt to and mitigate the effects of climate change, often the measures taken “are not strong enough to avoid loss and damage when the situation is aggravated by an extreme weather event" according to a report released by United Nations University. This is because many climate change projections are not in a format usable by stakeholders (i.e., deterministic, decadal/centennial, averages instead of extremes). Yet stakeholders are still faced with making design and planning decisions in light of climate change.

To address this issue, our team, using a Physics Guided Statistical Model (PGSM), will translate climate change projections into concrete data that quantifies the climate-change threat today. This data will allow climate change risks to be embedded in the day-to-day decision making of stakeholders, allowing adaptation initiatives the credibility and urgency to compete for required resources. Measuring how climate-related risks are evolving today is the first step in building the adaptive capacity of organizations and communities. While this methodology is widely applicable, in this proposal we will demonstrate how the PGSM applied to extreme weather events is a novel, feasible and high impact approach to improve adaptation across the globe. In our action plan, we will demonstrate how tailoring these outputs for insurance companies will cause cascading effects across all sectors. 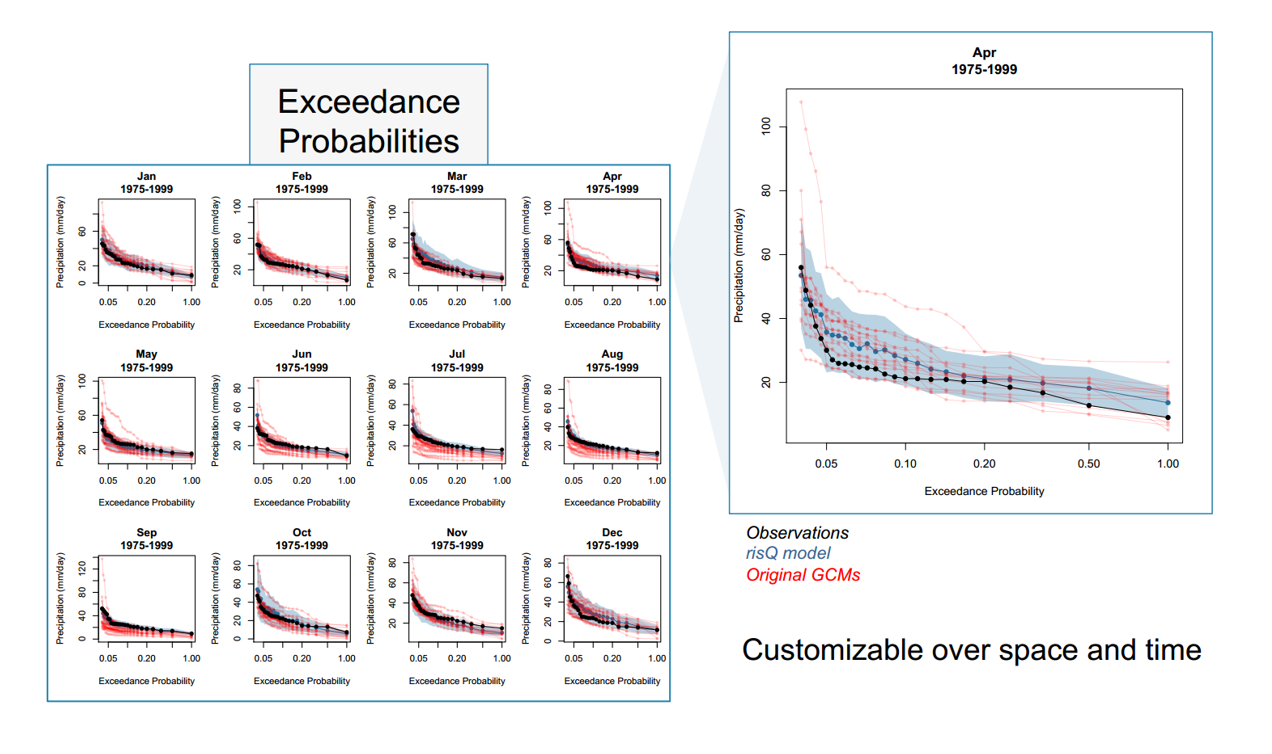 Through an intersection of climate science domain knowledge and expertise in statistical modeling, our Physics Guided Statistical Modeling (PGSM) framework converts the multitude of data sources and complexities of climate change into probability distributions for weather extremes at decision-relevant scales. These distributions will be used by many stakeholders to make climate change informed decisions. For example, at risk communities can use these predictions to implement stronger measures against extreme climate events.Furthermore these communities could receive economic support from insurers who would be able to directly use the data in their actuarial models.

At the core of the PGSM framework, known physical relationships are used to guide the development of a Bayesian statistical learning architecture. Probabilistic outputs of the model are constrained by known physics and are designed to quantify uncertainty in future extreme events.

The PGSM framework has been found to perform accurately in multiple forecast tests against out-of-sample, real-world observed extreme precipitation events. Scientifically, this is a significant advance beyond modeling techniques available in peer-reviewed literature. The ability to utilize robust, probabilistic information on climate change and its effects on extremes will be a fundamental shift in risk assessment processes across many industries.

With competencies in risk management and finance, insurance companies are uniquely positioned to improve adaptations to climate change. They are also uniquely motivated: weather related damages have increased to nearly $130 billion per year and are considered a major threat to the industry. The Association of British Insurers (ABI) and other groups have released publications urging insurance groups to actively pursue climate change solutions.

By providing data in a format that can be input into actuarial and catastrophe models, insurance companies will be able to provide new financial instruments that take into account climate change adaptations. For example, Munich Re provides micro-insurance to small farmers in developing nations. Better data would give other groups the ability to provide similar or even more innovative products.

With the ability to accurately assess and predict damages caused by climate change, insurance companies will be able to create new innovative insurance policies and push for regulatory policies that will cause a cascading financial incentive to implement climate change adaptations.

What is the difference between what risQ is doing and current methodology? Is there a practical difference? 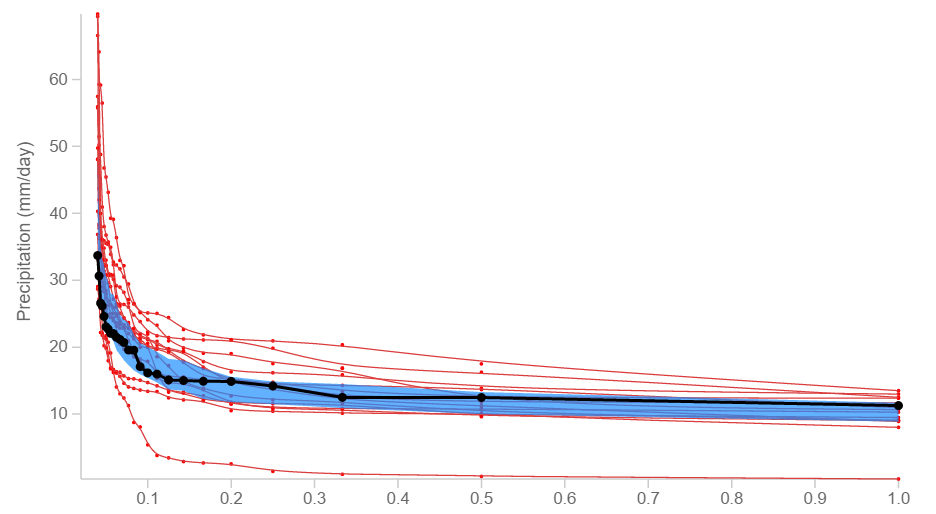 Why target the insurance industry?

How would this impact the developing world?

What else can be done with this data?

We have been actively engaged with:

who will be able to use the publications and software developed to significantly advance best practices in climate change adaptation.

Evan Kodra is an applied statistician with a core focus on developing best-of-class quantitative approaches in climate change, weather extremes, and resilience that can be used by practitioners. He holds a Ph.D. in Interdisciplinary Engineering from Northeastern University’s Sustainability and Data Sciences (SDS) Lab as well as a B.S. and M.S. in Statistics from the University of Tennessee. His research on climate and weather extremes and natural hazards has been published in journals including Nature Publishing Group’s Scientific Reports [Kodra and Ganguly 2014], Geophysical Research Letters [Kodra et al. 2011], PLOS ONE [Bhatia et al. 2015], Computers and Geosciences [Parish et al. 2012], Nonlinear Processes in Geophysics [Ganguly et al. 2014], and Environmental Science & Technology [Kodra et al. 2015].

Auroop Ganguly will assist in future development of risQ's products. He is the Principal Investigator of the SDS Lab and Associate Professor of Civil and Environmental Engineering at Northeastern University. Ganguly has a PhD from the Massachusetts Institute of Technology as well as 17 years of experience spanning academia, a government-owned national research laboratory, and the private sector. He is the Co-Chair of the Societal Dimensions Working Group for the Community Earth System Model.

Colin Sullivan's experience in business development and technology transfer will assist in the careful tailoring of products to meet stakeholder needs. Sullivan leads the teams stakeholder outreach and engagement. With a BS in Computer Engineering from Northeastern University and years of experience in technology transfer at both Northeastern and Yale, Sullivan has experience to translate research into technical software products.

While the initial focus is in the United States, the data products should be applicable worldwide. We have been actively engaged with many European private sector groups and in India.

Engineering firms must develop climate-informed engineering design parameters and building codes due to increased urbanization, coastal inhabitancy, and climate impacts. Intensity-Duration-Frequency (IDF) characteristics of extreme rainfall have long been used for water management and civil engineering planning. Reliable IDF statistics are also crucial as key drivers of flooding and storm surge. Organizations including the Massachusetts Department of Transportation and the National Oceanic and Atmospheric Administration currently provide IDF data - but only based on historical precipitation data. We will partner with engineering design firms who can translate our IDF data to engineering design parameters that reflect current and future climatic risks so as to help their clients adapt to climate change.

risQ plans to sell data products to stakeholders in order to continue development of its data products. R&D costs to bring an preliminary product to market are expected to be $225,000 and the team is currently in the process of securing these funds.

To date we have we have achieved major milestones in this vision:

By:  risQ
Contest: Adaptation 2016
What can be done to prepare for and adapt to the impacts of climate change?
Follow on: