Elena Saporta, ESLA, is the primary member of the team. She is a landscape architect who specializes in the design and greening of urban spaces. The impetus and inspiration for the bike rack/ bench design came from her observation, throughout the Boston area, of numerous examples of bicycles being locked to the sides of benches.

The 'BRB-Bike Rack/Bench,' by integrating two uses, bicycle parking and seating, into one compact unit, takes up less combined space than these two site elements would individually.  The number of supports and footings required would be reduced by approximately half, thus optimizing the cost of fabrication and installation, both.

In designing the 'BRB-Bike Rack/Bench,' City of Cambridge guidelines for bicycle parking were followed closely,  Bicycles are parked 3'-0" on center for ease of access and are supported by at least two points of the unit's structure.

In areas, requiring a large number of bicycle parking spaces, the 'BRB-Bike Rack/Bench' site elements can be placed side by side, in a linear or curved arrangement, allowing for a minimum 3'-0" from center of rack to center rack between units.  At corners, two bike rack/ benches can be positioned at right angles to one another.

The 'BRB-Bike Rack/Bench' is intended to be used for both long and short term parking.  By placing bicycle parking behind the bench, the bench functions as a low visual screen.  To a passerby, bicycles will be mostly out of view, lending a less cluttered, more orderly, streamlined appearance to the overall space, be it a street-scape, plaza or park.

The signature element of the design is a gracefully curved brushed aluminum (or stainless steel) pipe that functions all at once as a bench support, armrest and bicycle rack. The unit can be either in-ground or surface mounted.

The material of the bench can vary.  The surface of bench, as depicted in the model, is composed of a series of 1/2" diameter rods.  The rods reflect the tubular nature of bicycles as well as the aesthetic of the pipe element.  A less costly alternative treatment is to use slats constructed out of sustainably harvested wood.

The 'BRB-Bike Rack/Bench' was inspired by the designer's observation of numerous examples, throughout metropolitan Boston, of bicycles being locked to the sides of benches. An example of this can be seen in front of the City of Cambridge's Main Library.

Images are as follows https://i.imgur.com: 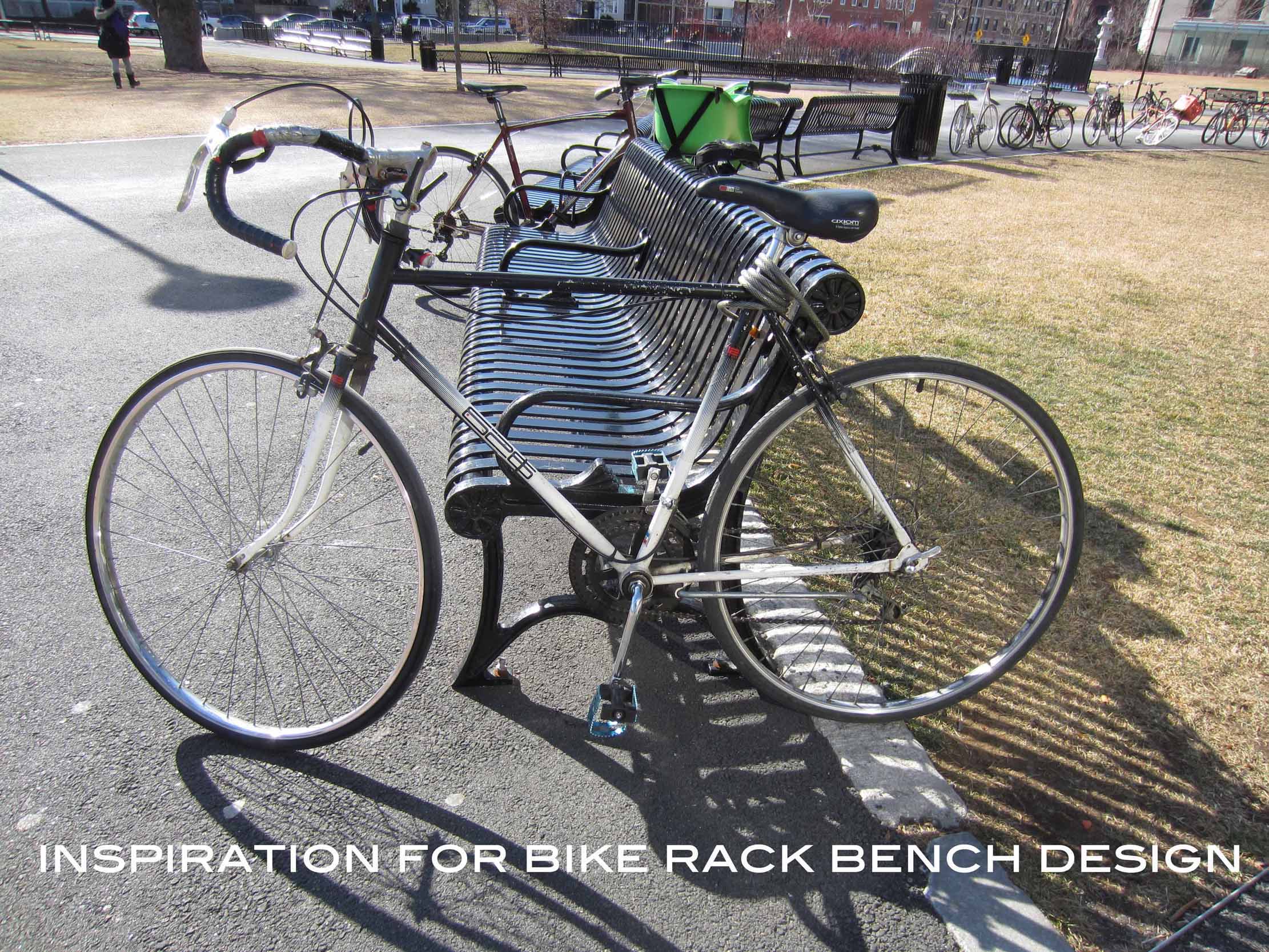 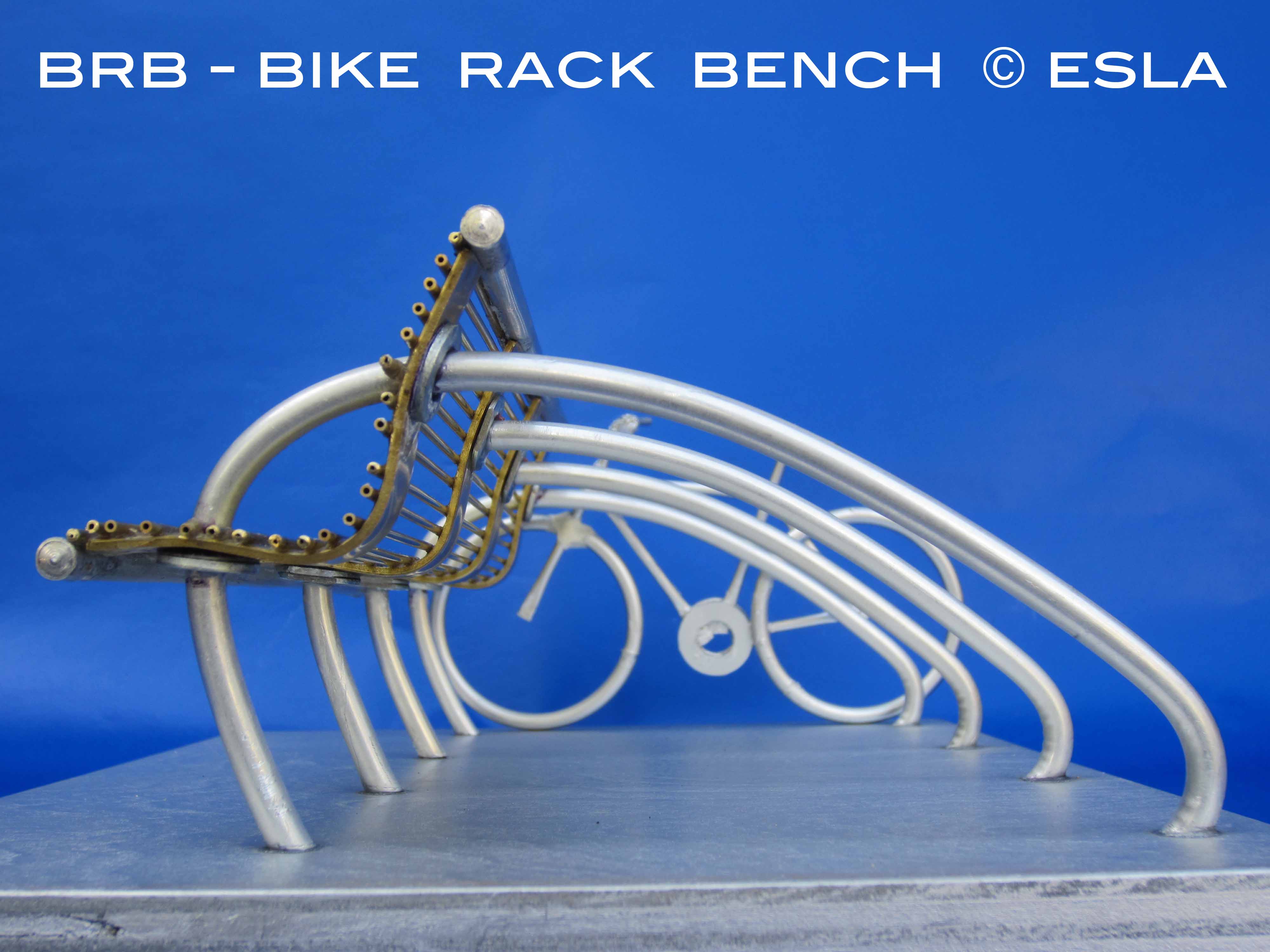 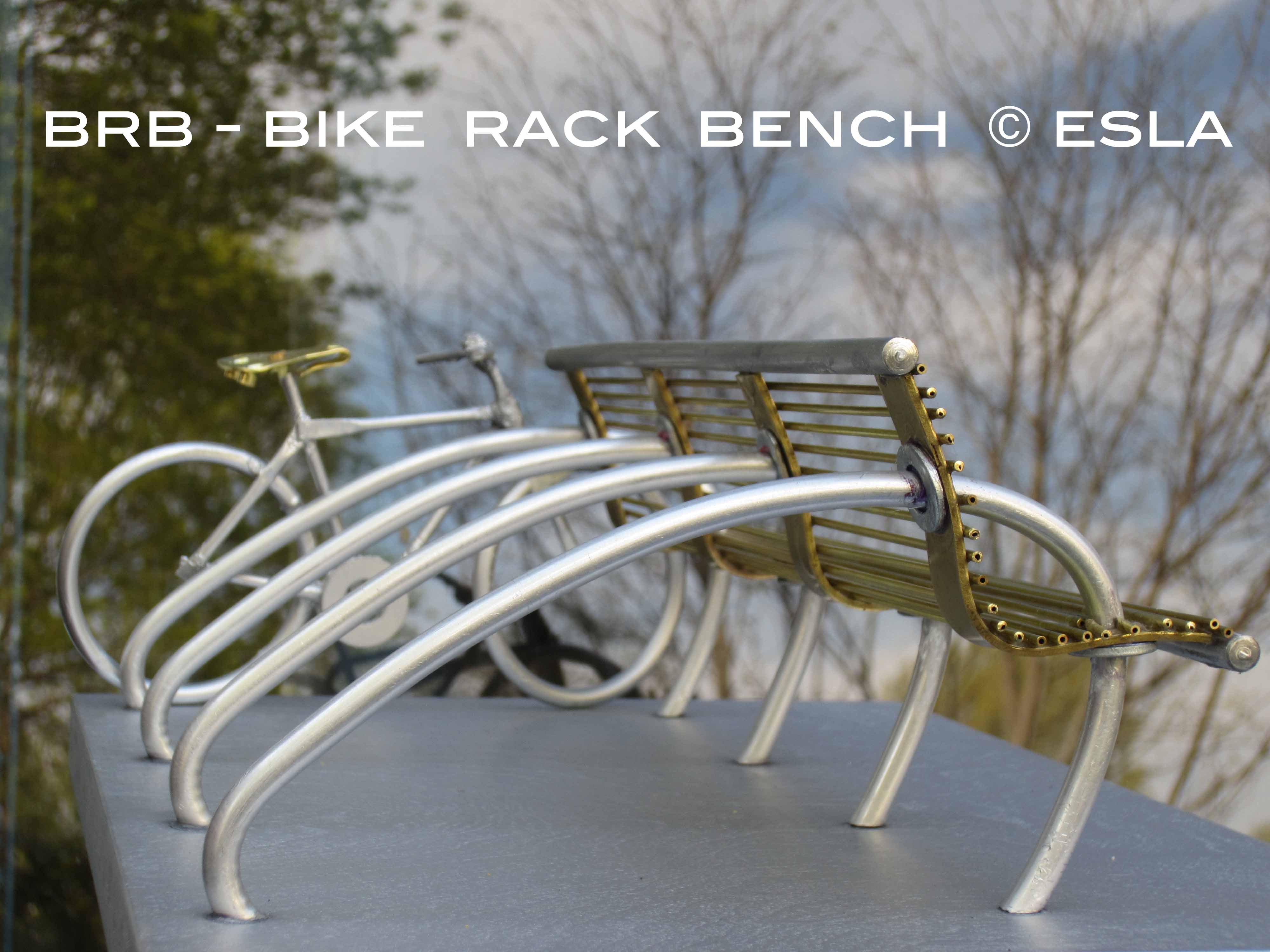 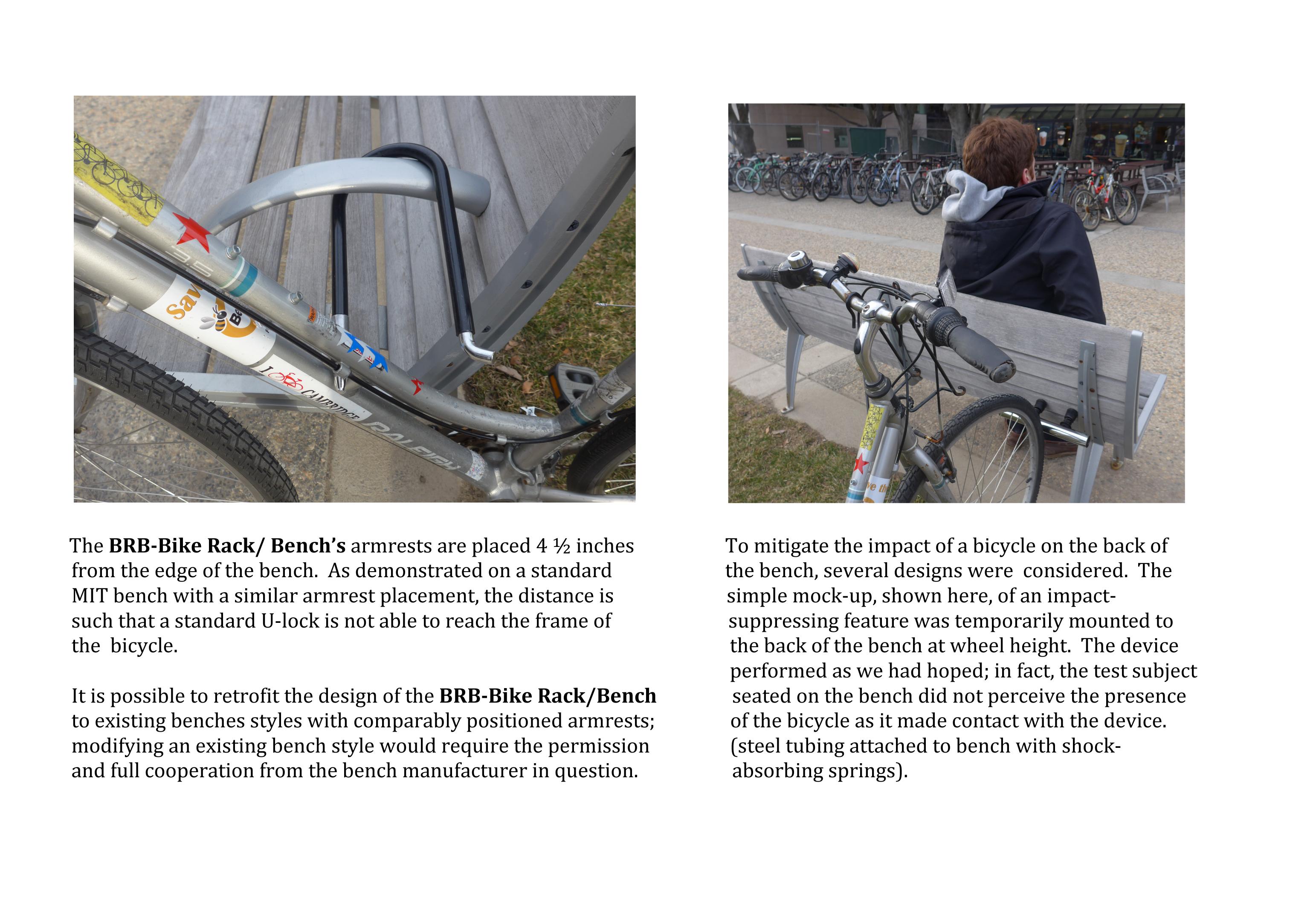 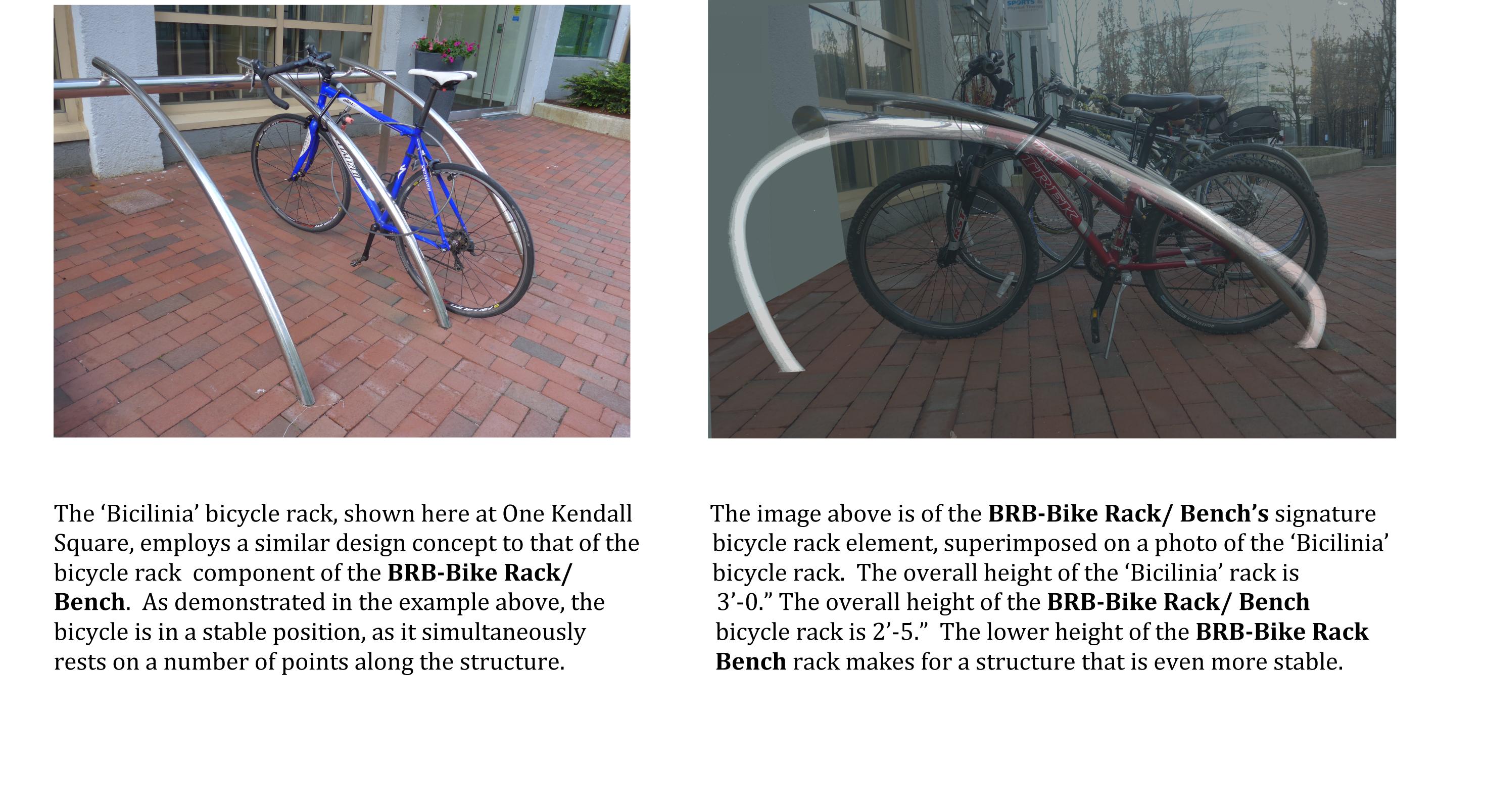 • AutoCad drawing of elevation and plan of proposed design 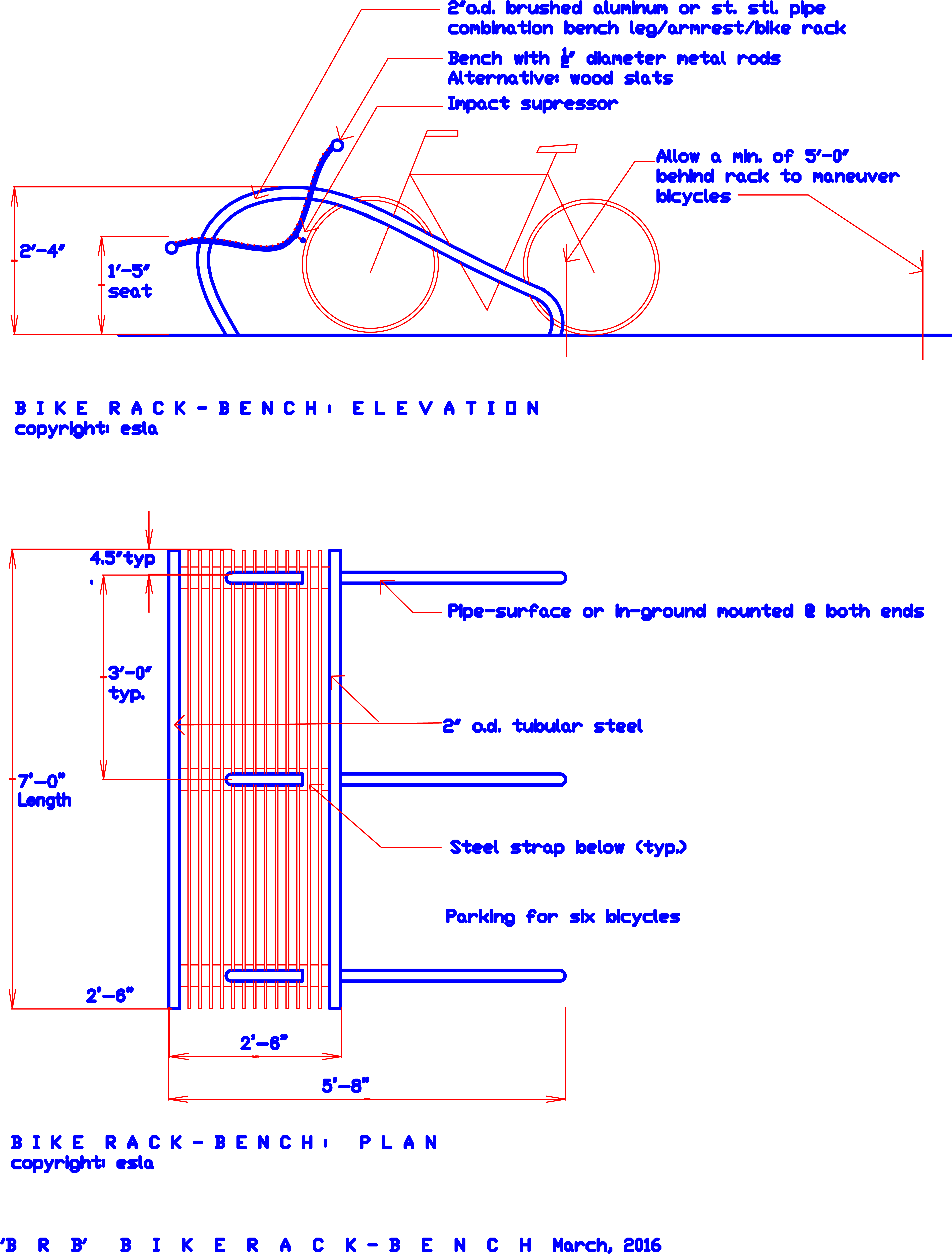 After the prototype of the 'BRB-Bike Rack/Bench' is completed and a manufacturer takes on the unit as part of its product line, the cost of the unit from the commercial manufacturer is estimated to be between $1,200 and $2,000, depending on the materials selected.

Week 1: The first stage in developing a prototype will be to construct a 'bread-box' full-scale model out of heavy cardboard.  This model will be used to refine the overall appearance of the 'BRB-Bike Rack/Bench' and to assess its functionality.  This will include studying the size, shape and spacing of the pipe elements and the profile of the bench. The model will be tested outdoors using bicycles and full-size mannequins.

Week 2 and 3: The design will then be drawn to scale and computer tested for structural integrity.  This analysis will be performed by a structural engineer or site furniture manufacturer, by using a structural engineering program designed for this purpose.  The structural components and connectors for the bike rack/ bench unit will be sized accordingly.

Week 4: The final structural drawing will be shopped out to at least 3 fabricators for comparative pricing of the final prototype.

Weeks 5-7: Construction of the prototype will take plac by the selected fabricator.  Designer will meet with the fabricator on a weekly basis to review progress and suggest minor adjustments, as needed.

• Photograph (2 in all) of scaled model of proposed design