Remove all CO2 added to the air since the Industrial Revolution, in 1-10 years using a forest of synthetic trees 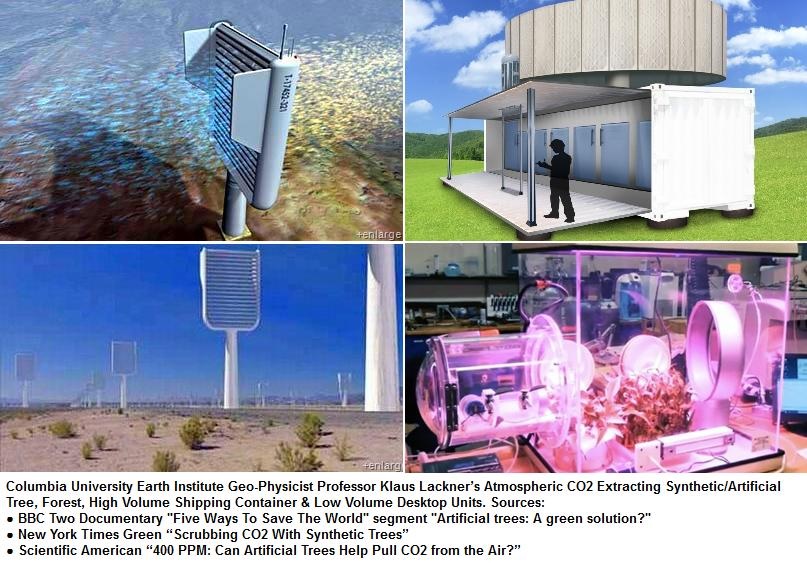 Each of Columbia University geophysicist Klaus Lackner's High Volume Shipping Container synthetic trees removes 90 Kilotons of CO2 per year. Roughly 600-900 Gigatons of CO2 have been added to the air since the Industrial Revolution (IR), thus needing 10 million trees to remove it all in 1 year, or 1 million in 10 years (Al Gore’s timetable) or 0.3 million in 30 years (John Doerr’s timetable). Note that in 2002-2003 China alone added 10 million cars to its roads. Since global ice is melting much faster than predicted, consider the need as urgent & go for the shortest time period doable. Of all global warming/CO2 removal geo-engineering proposals, such as increasing cloud/ice reflectivity, stimulating oceanic plankton blooms or launching orbiting space sunshades, most all of which augur unanticipated & potentially disastrous run-away ecological responses, synthetic trees are the safest because they aren’t ecosystem invasive - serving as a distributed, planetary scale CO2 scrubber, they simply mimic natural tree’s CO2 removal ability & give humanity breathing room to develop & switch to Net 0 CO2 tech. Even if all other reduction schemes fail, the trees will remove all post Industrial Revolution CO2 to the present, can continue to run as a stopgap to remove future global annual contributions, & can be switched off when done.

A primary aim of this proposal is to supplant the many lines of attacking the CO2 problem with an alternative approach - it does not require or rely upon the success of any other CO2 reduction scheme, nor does it deem likely that remaining fossil fuel will go undeveloped & that developing nations will curtail their development programs. This proposal’s alternative approach is that it recommends a single, relatively simple, direct & failsafe method of CO2 removal regardless of source or quantity, thereby providing countries the time to make the changes to renewable/sustainable technologies & meet the UN IPCC goals without damaging their economies.

MIT Alumni would use their positions & contacts in Government, Business & Education to implement the following tasks, particularly working Education resources in expanding the artificial tree tech to additionally handle even more troublesome greenhouse gasses such as methane as well as working government & business financial/economic forces to cover costs from a combination of governmental budget allocation & Carbon Offset model utilization (as discussed in the sections below "Who will take these actions?" & "What are the proposal’s costs?").

With global ice melting far faster than predicted, our plight seems relatively dire & the time to turn things around fairly short. The following steps to launching a synthetic tree forest should be doable within 2 years:

1) Develop a Roosevelt “Dr. Win the War” (against Climate Change) program to implement the project

2) Propose the plan to all the countries of the Earth at the United Nations, as meeting the UN Millennium Development Goals, particularly “Goal 7: Ensure Environmental Sustainability”

3) Mass produce the trees as we mass produce cars at an auto factory – the tree is far simpler & cheaper than a car.  Actually, it may not be required to mobilize an entire country’s factories but instead just a portion, dedicating just some assembly lines, for just a period of time, to produce the needed trees in the recommended timeframe. Further, if there are shutdown auto manufacturing facilities available, for example in the USA at Detroit, Michigan, then retrofit & repurpose the factory’s assembly lines for the project, thus offering the additional benefit of providing jobs for the laid-off autoworker community

5) Sequestration: Extracted CO2 can variously be:

• Possibly removed entirely from the earth by venting into space, through a NASA Space Elevator modified as a “pipeline“, with the elevator’s carbon nanotube belt fabricated as a rectangular or circular tube, utilized as a planetary CO2 “exhaust pipe”. NASA/Marshall's Advanced Projects Office has compiled Space Elevator plans

• Government will develop & manage the “Dr. Win the War” programs

• Industry will produce the artificial trees

• Academia will determine the optimum design & distribution of artificial tree stands comprising the global artificial tree forest. Additionally, academia will be tasked with expanding the scope of greenhouse gas removal to include the other even more damaging gases contributing to the problem, particularly Methane from polar permafrost & potential ocean floor methane hydrate melt, by designing a variant of artificial tree that, instead of filtering out CO2 instead filters Methane – already scientists at Lawrence Livermore have discovered & tested an effective methane-capturing porous adsorbent material called Zeolite SBN

The artificial tree forest will restore CO2 to pre-Industrial Revolution levels in 1 to 10 years, & can be kept running to keeps things that way for the foreseeable future. The worst consequences of climate change – melting ice, rising seas, super storms, heat waves, drought & crop failure, along with their combined contribution to governmental overwhelming, societal collapse & resultant political instability – can be interrupted &, with sufficient commitment to repair & restoration, backed out, the closer to normal the sooner we start with the larger of forests.

Professor Lackner estimates each High Volume Shipping Container synthetic tree costs about $20,000 to manufacture, the price of a low cost car. For the “10 million trees to remove it all in 1 year” plan, & noting as before that “in 2002-2003 China alone added 10 million cars to its roads”, the cost would be the value of China’s car production for that 1 year for low cost cars.

The total GLOBAL BILL for the 3 plans are:

Evidently, beside these core costs would be supplemental expenses involved with tree production, setup & “running the forest”, as well as general administration & sequestration operations. Needed power, supplied by renewables, besides that available from solar & wind, can be provided 24x7 via hydropower by locating the forest by river. As an innovative way to fund & pay for the project, in addition to government funding, to get businesses to pay their fair share of contribution to the problem, create a companies pool to invest in & fund the core & supplemental costs of the project by utilizing the Carbon Offset model.

The term of the actions is determined by the size of the artificial tree forest chosen, the 3 footprints herein (“10 million trees to remove it all in 1 year, or 1 million in 10 years (Al Gore’s timetable) or 0.3 million in 30 years (John Doerr’s timetable”), with the recommendation that, because of the lateness of the hour, the urgency of the situation & particularly due to having blown past such tipping points as loss of the Western Antarctic Ice Shelf & exceeding the recommended safe level of atmospheric CO2 350 PPM (as advocated by former NASA & current Columbia University Earth Institute climate scientist Dr. James Hansen), now past 400 for over a year, that the situation is dire & so the most rapid short term plan is urged, phased in by mass producing the trees, installing the forest & switching on the system as soon as possible.

By:  Clifford Thompson
Contest: Harnessing the power of MIT alumni 2016
What is the most effective thing that MIT alumni can do to help implement the MIT Plan for Action on Climate Change?
Follow on: