This proposal seeks effective humanitarian pathways within the four realities of political and social unrest due to climate change.

Today, somewhere on the crowded stage of Planet Earth, hundreds of millions of performers are living day to day desperately trying to avoid transitioning from normalcy to chaos in a short amount of time!

While a life of normalcy isn't always a piece of cake . . the lines are easy to memorize especially, when there's food, water, and the stage is comfortable with a flick of a switch.

The curtain is closing!

Those trains normally filled to capacity with the essentials of food and water. . the masses need for a lawful transition to adaptation are now half-empty . . and the engineers are asleep at the controls.

Those once half-empty trains are now now filled to capacity with non-paying passengers in search of sustainability and lost freedoms.

Those trains we once relied on for food, water, & shelter no longer run. The engines, cars, and tracks are being dismantled and taken away in pieces.

For without law and the bare essentials to sustain life . . mankind will be forced to replace empathy and compassion with the inherent desire to survive.

The bottom line here is . . we and our families may soon be engaged in a paradox of biblical proportions!

Planet Earth has hundreds of millions who could transition from NORMALCY to CHAOS in a short amount of time.

S N E . . as a planetary SINK . . will enhance international security and help address the economics and humanitarian issues of hunger, water, climate change, and the chaos of forced migration.

The United Nations recently issued a report that stresses water supplies, aggravated by climate change, are likely to cause more conflicts, and that water should be considered as vital to international security as defense.

Deserts, which consumes approximately (one/third) of the Earth's surface - without water, are bastions for suffering and are basically useless.

It has been estimated that one CSP / Seawater Greenhouse (78 square miles) located on the desert will evaporate approximately one million tons of seawater per day.

The desert around Tucson, Arizona (USA) receives (12) inches of rain per year. However, this desert has the capacity to evaporate (100+) inches per year. Eight times more than received. 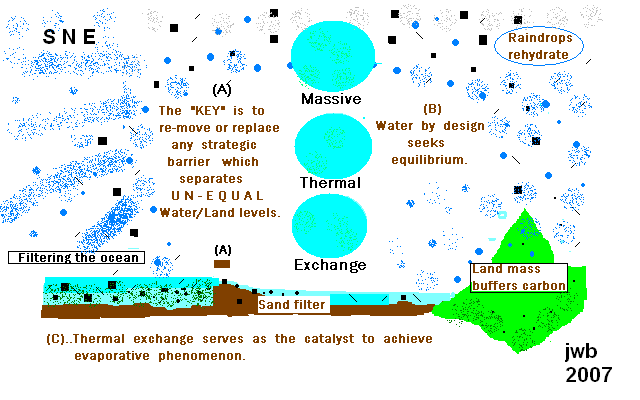 (ONE PERCENT) of the land mass and Thermal / Exchange potential of the hot deserts of our world, in combination with seawater, WILL EVAPORATE OVER (252) BILLION TONS OF SEAWATER EVERY 460 DAYS.

This (ONE PERCENT) evaporation process contains the "albedo modification" potential to produce over 9 billion cubic miles of FOG every 460 days.

The "KEY" is to remove, replace, or usurp any strategic barrier which separates UN-EQUAL Water/Land levels so that nature can repair and heal itself. 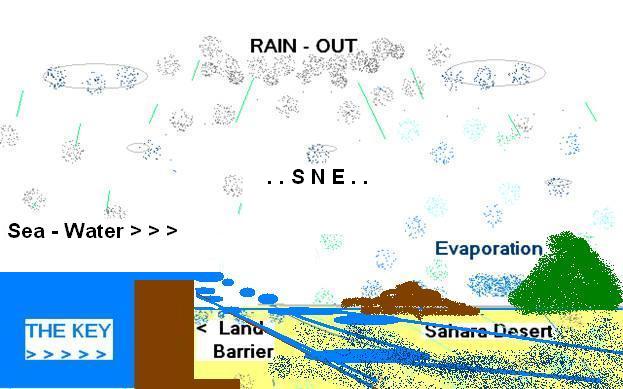 When we remove any barrier that blocks the oceans's ability to  F-L-O-W into/onto the desert land below sea level, we have the opportunity to create hydration to provide the essentials for the masses.

This process can turn barren land into crops of saltwater plants  which have evolved mechanisms that will allow them to survive in saline conditions to sustain a large variety of humans and animals.

Pools of  saltwater ponds will be able to grow Dutch sea kale, Sargassium muticum, and the Mediterranean sea fish (Tilapia) as they can survive saltwater to (44) parts per thousand.

At night, the evaporation condenses and falls back to Earth where catchments (like fog fences and air wells) collect the atmospheric humidity for human consumption.

The highly saturated air of short duration will cause rain and especially snow and ice on mountain ranges. This run-off will provide more water for the innocent masses located between latitudes 35 degrees north and 35 degrees south.

It is estimated that in the Sahara up to a million people have already died trying to escape the ravages of war and the devastating effects of on-going climate change. 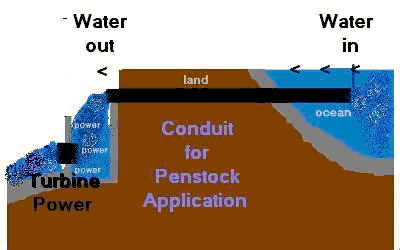 As the oceans continue to rise due to ice melt and thermal expansion, many agree that no later than 2070, over 150 million residents will be exposed to coastal flooding with lost revenue exceeding $35 Trillion (USD).

Many top engineers and climate experts also agree the Sahara Desert alone contains the holding capacity to absorb (one) meter + of sea expansion. 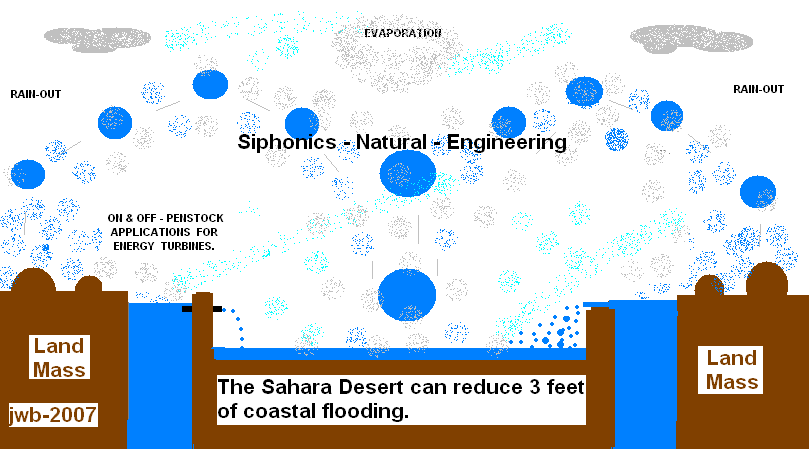 The Bottom Line Here Is;

If we use the SNE planetary SINK  applications . . as a prudent opportunity to neutralize sea expansion, remove CO2 and ocean acidity, we can create humanitarian refugee havens to economically neutralize social unrest and climate change.

This one expanded process of 5,651,000 square miles is the equivalent of adding another 2%+ to the total surface of Planet Earth.

These deserts contain billions upon billions of tons of limestone calcite and calcium carbonate which reacts with seawater that is saturated with carbon dioxide to form a soluble calcium bicarbonate which is a safe and powerful global carbon sink.

This alkalinistion process helps neutralize ocean acidity and efficiently stores carbon dioxide as long as the alkalinity is not removed from the process.

A global application would consist of nine deserts.

To reemphasize . . this combined total of 5,651,000 square miles is the equivalent of adding another 2% + to the total surface area of the Earth.

This proposal is specifically designed to responsibly reduce planetary coastal flooding and create safe zones for refugees due to social unrest and the devastating effects of climate change! 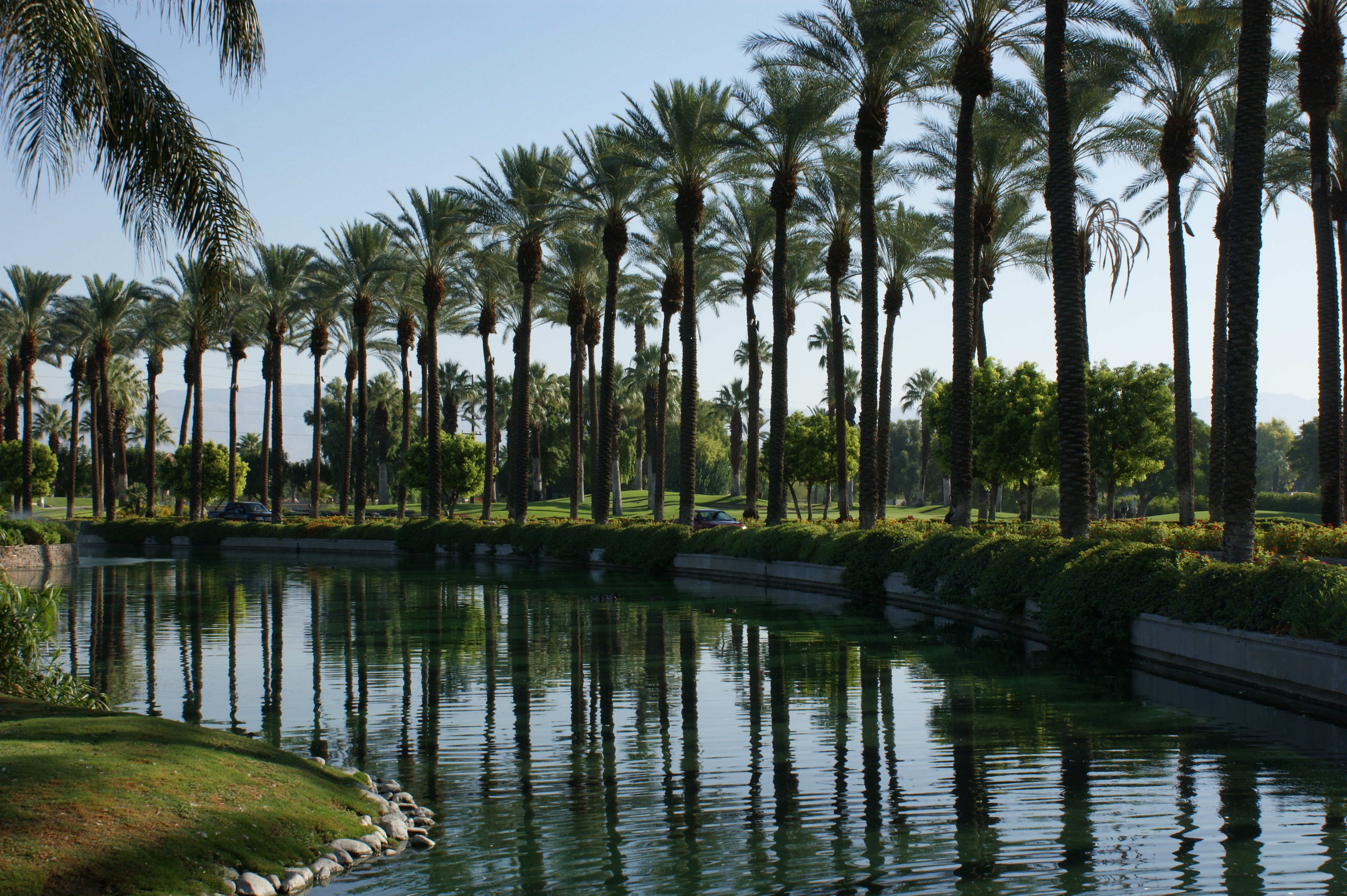 SNE (Siphonics Natural Engineering ) is a global sink application using 9 deserts which has a combined total of 5,661,000 square miles which is the equivalent of adding another 2%+ to the surface of Planet Earth. THIS ADDITION WOULD BE A NEW FOREST THE SIZE OF ANTARCTICA WHICH IS 5,405,000 SQUARE MILES.

The objective, in non-hostile environments if possible, is to lease all equipment and contract personnel.

Most deserts sometimes have sand &/or gravel, etc. one hundred feet before reaching a bottom to substantiate water flow.

These deserts contain billions upon billions of tons of calcium carbonate which reacts with water that is saturated with carbon dioxide to form soluble bicarbonate.

This alkalinization process efficiently stores carbon dioxide as long as the alkalinity is not removed from the system.

These custom machines are designed to move in and out within their own footprints.

If hostile environments refuse to permit a timely removal of  barriers required to save the masses . .all contingencies, including detonation, may have to be used as the only remaining option.

According to the United Nations World Food Programme (WFP), 49 million people now face extreme hunger issues in southern Africa due to drought worsened by the most severe and longest El Nino weather pattern in 35 years.

This proposal is especially important for the developing countries of Africa in their search to provide the economical and environmental continuity their families will need to adapt and survive in Africa!

If this is not deemed possible within a realistic time frame - the developed countries of Europe will pay a huge price for the massive migration and assimilation!

As of this writing, Germany has already absorbed an influx of 1.1 million refugees with another five to ten million on the way.

According to leadership in Europe, only 10 percent of Syrian and Iraqi migrants have reached Europe so far and eight to ten million are still on the way, with more to come from Africa.

Planetary leaders, who fail to appropriately address this delicate time frame, may witness a massive die-out of those within their responsibility.

These novel submissions are comprehensive and specifically designed to help create a climate change reprieve to reduce the impacts of 65 million refugees destined to populate Planet Earth!

Drought, migration, and chaos in South, Central, and North America are coming to a location near you!

The managerial skill-sets of elite entrepreneurs on Planet Earth can utilize existing infrastructure to create lifelines to sustainability!

Let the Earth help us to Save the Earth by R.D. Schuiling

Rock's power to mop up carbon

By:  Johnnie Buttram
Contest: Geoengineering Workspace 2021
What initiatives, policies, and technologies can counteract the effects of rising greenhouse gases, whether or not emissions are reduced?
Follow on: