Electricity generation represents over one-third of the total greenhouse gas (GHG) emissions in the U.S. Unless green energy and efficiency are prioritized, climate change ills are expected to worsen. In order for the City of Somerville to meet its ambitious carbon neutral target by 2050 the city must engage with its community to meet a new energy future.

In 1997 Massachusetts deregulated the state’s electricity market to allow its customers to choose their electricity provider. Despite this freedom of choice, few customers within deregulated electricity markets have switched from their default provider. Even though choosing a new electricity supplier may result in lower costs and/or greater environmental benefits by supporting renewable energy, residents may be intimidated by the process and unwilling to take the time to learn about their options.

What if Somerville pursued an atypical approach to solving this problem, and acted on behalf of its residents and businesses to secure electricity generated from regional, renewable, and less expensive sources? Fortunately, a successful model called Community Choice Aggregation (CCA) already exists in more than 50 municipalities in Massachusetts, with 12 more applications pending (Editorial Board, 2015). CCA is a policy where municipalities leverage their bulk purchasing power to secure favorable generation sources and services. A CCA may offer discounted rates and options of environmental benefits to their constituents. CCA empowers customers who have not yet taken advantage of the ability of choice through electricity deregulation.

The City of Somerville should establish a CCA as the new “default” energy supplier to procure 50% of the City’s electricity needs from renewable sources generated in the region. The City can also consider offering an option for 100% green electricity for customers if they choose. 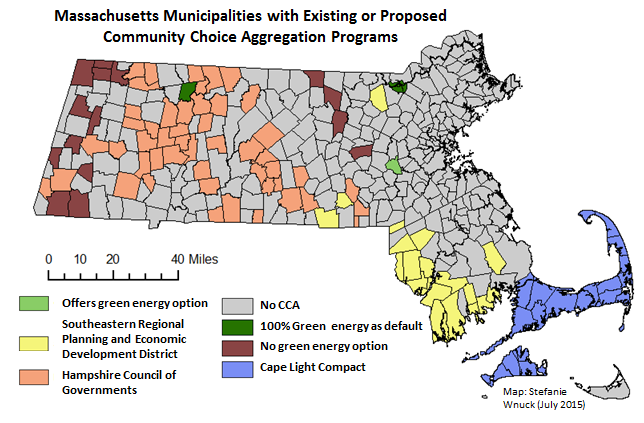 First the Board of Aldermen must vote to approve the CCA measure to begin the process. Following that Somerville chooses whether to work with an energy broker to issue a request for proposals (RFP) and secure a contract with an electricity supplier, or act on its own.

Once the city has taken these straightforward steps, the 2013 “how-to” guide prepared for the Metropolitan Area Planning Council outlines the following steps for municipalities to take to establish a CCA (Laufer et. al., 2013).

An important feature in a CCA is the “opt-out” rather than an “opt-in” default model. In other words, if the City of Somerville establishes a CCA, all electricity customers with basic service from Eversource would automatically be transferred into the new CCA program, and a provider selected through a competitive bidding process held by the City would supply the electricity. Participation in the CCA program is completely voluntary - customers can choose to opt-out free of charge at any time to go back to Eversource’s basic service, or contract with a different competitive electricity supplier.

Research has shown an opt-out model can result in environmental benefits - in this case, a greater demand and generation of local, renewable energy. For example, a study by Pichert & Katsikopoulos (2007) demonstrated the way information is presented has a significant impact on customers’ choice of electricity provider. The study found that customers are much more likely to choose electricity from renewable sources when it is presented as the default option than when it is the alternative. Significantly, customer preference for “green” electricity holds true even in the “neutral” case, where customers who were not assigned any kind of default option had to choose between electricity from renewable sources and the basic service. Over 60 percent of customers in the neutral case also opted for green electricity (Pichert & Katsikopoulos, 2007).

Not surprisingly, U.S. polls found 72% of residents say they would favor renewable energy action (Leiserowitz et. al., 2014). However, evidence shows that people do not follow through with their stated preferences, as only 1.7% of total U.S. electricity sales in 2013 were from voluntary retail sales of renewable energy (NREL, 2014). This finding is supported in Somerville and other municipalities across the state, where the majority of residents remain on Eversource’s basic service even though they have the option to choose an alternative energy supplier. In contrast, an overwhelming majority of the commercial and industrial sectors in Massachusetts have taken advantage of the power of choice offered in the deregulated electricity market, where approximately 90% of the electricity consumed comes from competitive electricity suppliers (MA EOEA, 2011).

By instituting the switch automatically to support green electricity generated from local, renewable sources, the CCA approach solves the apparent disconnect between people’s stated preferences to buy green electricity and failure to take action to actually do so. CCA also presents an opportunity to more directly engage with residents and businesses on the subject of where our electricity comes from, and what the community can do to support actions that will bring the City closer to its carbon neutral goal.

The City of Somerville will initiate and lead the process, but officials can choose to work with an energy broker who would largely be responsible for providing initial research, planning, program design, as well as implementation on behalf of the municipality. Notably, the broker is paid by the selected supplier and not by the contracting municipality. Although entirely optional, a number of municipalities pursuing aggregation in Massachusetts are working with an energy broker (Laufer et. al., 2013). An energy broker may also possess technical expertise and experience to be able to assist municipalities in crafting a narrative to use to build internal support for a CCA.

Environmental and community groups will also play a role in helping educate municipal officials, residents and business about program benefits. Enlisting support for a CCA from proponents of the City’s carbon reduction goals creates a natural partnership. Somerville can also draw on the experiences and lessons learned from other proven models in the state as a way to obtain initial buy-in to further explore the concept and determine which program attributes are most important to the City, such as renewable energy.

Beyond the actions outlined above that address how to adopt a CCA, the City of Somerville could expand its role in this process and encourage their constituents to conserve energy by managing energy efficiency funds to support programs tailored to Somerville residents and businesses.  Following the success of Cape Light Compact, the City of Somerville could allocate funding for their customer to ‘purchase’ efficiency at lower prices than their power.  These measures have markedly shown increased engagement and living experiences (Hawken, Lovins and Lovins, 1999).

Overall, the purpose of the CCA is to empower all members of the community, individuals and businesses, to take advantage of the freedom of choice to improve their wellbeing through the offering of proven energy solutions.

By establishing a CCA, where the default option is 50% of electricity supplied from regional, renewable sources, it is estimated that the City of Somerville could reduce its GHG emissions by 82,000 metric tons (MT) of carbon dioxide (CO2) annually. The estimate assumes a 90% participation rate among all resident and business customers. In other words, 10% of Somerville customers would chose to opt-out of the CCA’s green electricity program. Using the 2010 projections from the City’s 2001 Greenhouse Gas Emissions Inventory Report (the most recent data available), a CO2 emissions reduction of 82,000 MT would result in a 38% reduction in emissions from the electricity sector over business-as-usual, and an 12% reduction in the City’s overall GHG emissions.

To understand the full potential such a policy approach can have on helping the City of Somerville reach its carbon neutral goals, an upper bound estimate of GHG reductions is also estimated. If the City decides to take a more progressive approach and sets the default option for 100% electricity supplied from local, renewable sources - and assuming a 100% participation rate from all customers - then the City could reduce its CO2 emissions by 182,000 MT annually. Comparing this figure to the 2010 GHG emission projections from 2001, a CO2 emissions reduction of 182,000 MT would result in a 84% reduction in emissions from the electricity sector over business-as-usual, and a 26% reduction in the City’s overall GHG emissions.

Note: GHG reduction estimates do not account for line losses in the region.

Nationwide, approximately 2.4 million customers in 2013 participated in CCAs that supported over 9 million MWh of renewable energy (NREL, 2014). In order to maximize the environmental and economic benefits in the region, the City of Somerville should require its electric supplier to source energy from Class I renewable sources in the region, to the extent feasible. Supporting local renewable energy projects aligns with the City’s carbon neutral goals and also creates a greater demand for innovative technologies to be employed.

In addition to achieving significant emission reductions from the electricity sector while directly supporting renewable energy generation, there are a number of other benefits to implementing a CCA:

The cost of electricity provided through a CCA depends on many factors, including the current competitive market, relative bulk purchasing power of the CCA, as well as specifications required by the municipality (e.g., renewable percentage, geographic location, purchase of Renewable Energy Certificates (RECs)). Ultimately, Somerville officials will prioritize certain factors based on the vision and needs of the city.

A snapshot of current electricity supply rates from select CCAs in Massachusetts, as well as the utilities’ basic rate, are included below. 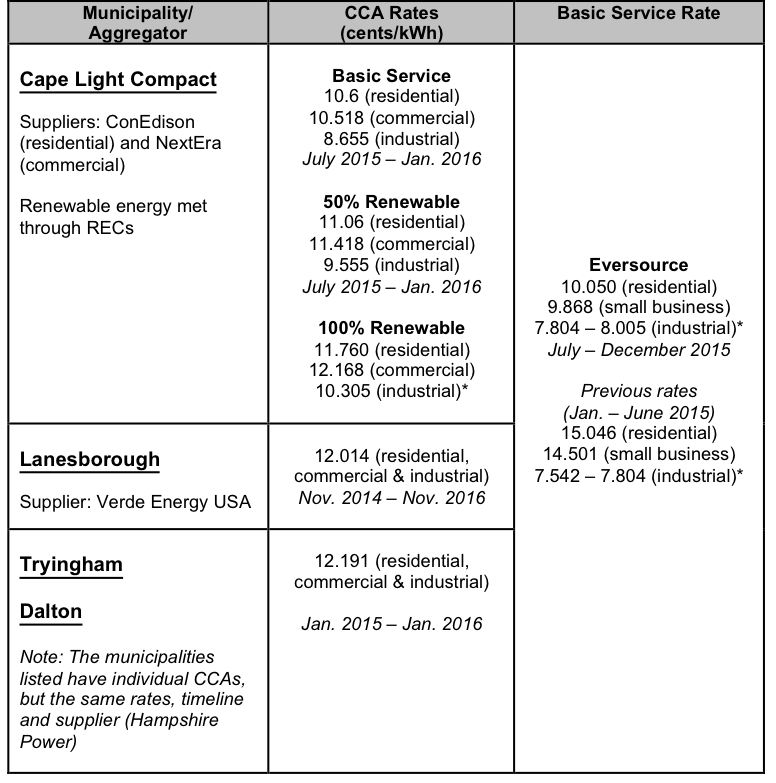 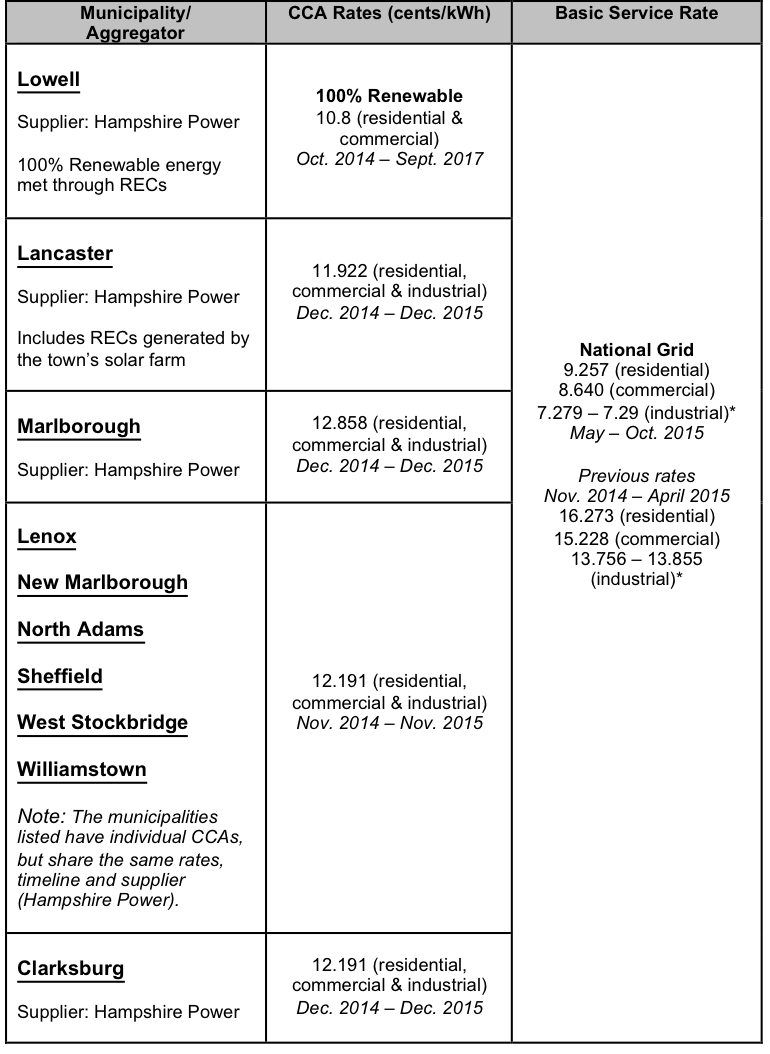 In a recent development, a group of municipalities in Massachusetts are proposing to take the CCA model a step further by joining individual aggregations together to leverage greater purchasing power to secure lower rates. In response to high and increasing energy rates, from June 24 – July 9, 2015, 12 municipalities have filed for municipal aggregation with DPU.  The pooled aggregation is expected to allow the municipalities to jointly purchase at 7% lower prices than if they were to purchase alone. (Editorial Board, 2015). If the aggregation plans are not met with legal issues of collectively pooling multiple municipalities, the new rates are expected to save an average household $100-250 per year, and the southeastern region of the state over $10 million. (Editorial Board, 2015).

Beyond the provided price of electricity, Somerville can offer energy efficiency measures at less than half the cost of electricity (ACEEE, 2014), allowing customers to further save money, energy, and their carbon footprint.

According to the analyses from a 2013 report, the entire process of establishing a CCA can take over a year (Laufer et. al., 2013). Obtaining plan authorization from the DPU is likely to take a few months, since the review includes a public comment period, and there may be additional information requests. A conversation with a city official from Lowell confirmed that the DPU approval process can be lengthy.

City of Somerville, Massachusetts (2015). “Commission on Energy Use and Climate Change: Public Meeting Agenda and Minutes.”http://www.somervillema.gov/departments/commission-on-energy-use-and-climate-change

By:  IdeatingGreen
Contest: Atypical Ideas for Carbon Neutrality 2015
What atypical, innovative ideas can turn Somerville, MA into a carbon-neutral city?
Follow on: