I would like to suggest that we as authors begin to build an open library of green grant and green bond resources and knowledge.

I would like to suggest that we as authors begin to build an open library of green grant and green bond resources and knowledge. This could be done by simply posting green grant/bond information in a dummy proposal space which would be set up to be modified by all.

I'll start such an effort and I hope it is both a help to the other authors as well as a place to deposit knowledge which we can all use. If we can keep this library moving from one challenge to another and do so for years, the funding knowledge base could evolve into a powerful tool.

The below list of green funding options is excerpted from: Working Draft Of The  iWENN © Management Series of Proposals and is offered as a starting effort towards building an extensive green funding library of knowledge. Please feel free to use what is here and post additional funding options. 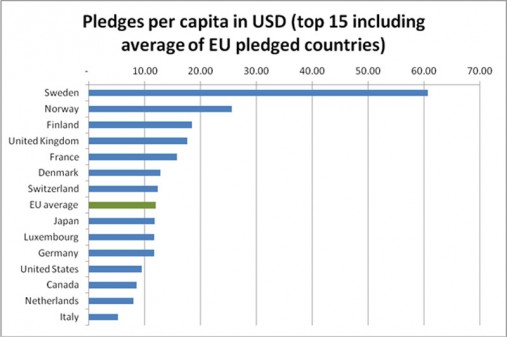 6.1.2) "The wheels of climate finance are turning: the Green Climate Fund (GCF) will soon start distributing funds through 7 institutions.". 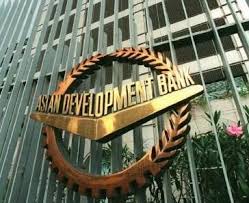 “The CCF was established in May 2008 to facilitate greater investment in developing member countries (DMCs) to effectively address the causes and consequences of climate change. The CCF is a key mechanism for pooling resources within ADB to address climate change through technical assistance (TA) and grant components of investment projects.”.

THE CLIMATE INVESTMENT FUNDS ARE A UNIQUE SET OF FINANCING INSTRUMENTS THAT GIVE DEVELOPING COUNTRIES AN URGENTLY NEEDED JUMP-START TOWARD ACHIEVING CLIMATE-SMART DEVELOPMENT. THE CIF IS DESIGNED TO DELIVER STRONG DEVELOPMENT OUTCOMES AS WELL AS STRONG CLIMATE OUTCOMES. THROUGH TWO DISTINCT FUNDS IMPLEMENTED BY THE MDBS, THE CIF SUPPORT DEVELOPING COUNTRIES’ EFFORTS TO MITIGATE AND MANAGE THE CHALLENGES OF CLIMATE CHANGE BY PROVIDING GRANTS, CONCESSIONAL FUNDS, AND RISK MITIGATION INSTRUMENTS THAT LEVERAGE SIGNIFICANT FINANCING FROM THE PRIVATE SECTOR, MDBS, AND OTHER SOURCES.”. 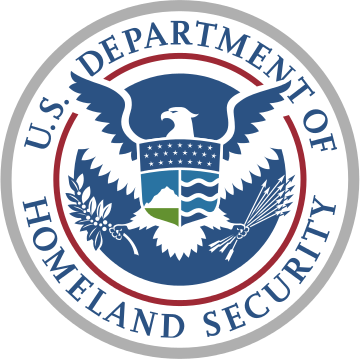 “The aquaponics system for (nearly) emission free tomato- and fish production in greenhouses, abbreviated “ASTAF-PRO”, provides ideal growth conditions for both fishes and vegetables at the same time – a challenge that traditional aquaponics systems cannot overcome. “ASTAF-PRO” is ASTAF-PRO is the technological basis for INAPRO, the “Innovative model & demonstration based water management for resource efficiency in integrated multitrophic agriculture and aquaculture systems. It aims at achieving a real breakthrough towards implementation and commercialization of this technology.”.

6.2) In the Green Bond investment space, a growing number of important market funding paths are being developed. Guidelines for such market based funding are currently being developed. Such as:

(Per CERES) “Green Bonds enable capital-raising and investment for new and existing projects with environmental benefits. Recent activity indicates that the market for Green Bonds is developing rapidly. The Green Bond Principles (GBP) are voluntary process guidelines that recommend transparency and disclosure and promote integrity in the development of the Green Bond market by clarifying the approach for issuance of a Green Bond. The GBP are intended for broad use by the market: they provide issuers guidance on the key components involved in launching a credible Green Bond; they aid investors by ensuring availability of information necessary to evaluate the environmental impact of their Green Bond investments; and they assist underwriters by moving the market towards standard disclosures which will facilitate transactions.”. 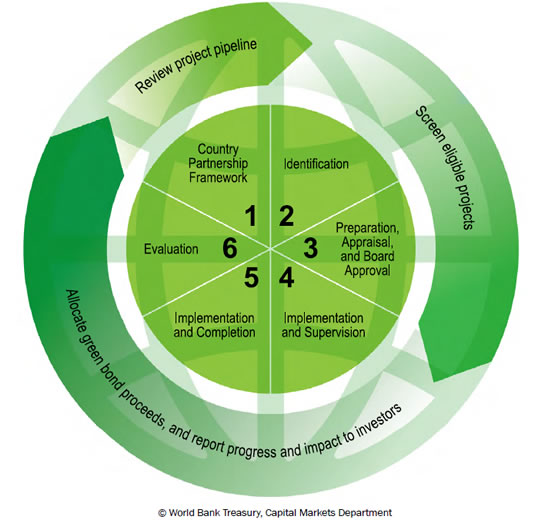 6.2.2a)‘Conservation Bonds’ Take Green Financing to the Next Level

"Green bonds, as described by the World Bank, “are fixed income, liquid financial instruments that are used to raise funds dedicated to climate-mitigation, adaptation, and other environment-friendly projects.” When issued by multilateral institutions such as the World Bank, or agencies of national governments such as the German Development Bank, such bonds may carry low, or even concessionary interest rates. Furthermore, a number of private financial institutions, attracted by the reliable returns on projects financed by green bonds, have entered the marketplace.”.

"In 2013 Massachusetts became the first state in the U.S. municipal bond market to issue these so-called green bonds.  The offering was so successful that Massachusetts tripled the volume of green bonds offered in 2014, selling $350 million in bonds to individual and institutional investors this month. According to Massachusetts Treasury officials, the demand for green bonds far outpaced the supply.”.

"Green bonds were created to fund projects that have positive environmental and/or climate benefits. The majority of the green bonds issued are green “use of proceeds” or asset-linked bonds. Proceeds from these bonds are earmarked for green projects but are backed by the issuer’s entire balance sheet. There have also been green "use of proceeds" revenue bonds, green project bonds and green securitized bonds.".

Ceres is calling this clean energy investment goal the Clean Trillion. Meeting this goal will be a tremendous challenge, but it is possible if businesses, investors and policymakers join forces.”.

6.3) In the phylanthropic Green Grant space, a number of emerging programs are found. Such as:

6.4) Increasingly, there are a number of cities coming together to develop ‘decentralized cooperation’ relationships focused upon climate change mitigation/adaptation.The primary example of this phenomenon is:   Cities for Climate Protection program 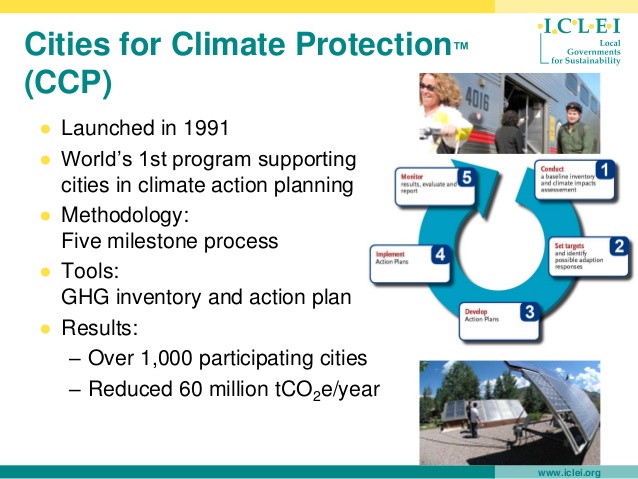 (Wikipedia)“The Cities for Climate Protection program (CCP) is one of three major global transnational municipal networks aimed at reducing urban greenhouse gas emissions. Established in 1990 by the International Union of Local Authorities and the United Nations Environment Programme, one of the largest global transnational networks, the International Council for Local Environment Initiatives (ICLEI), presented a framework to represent local government environmental concerns internationally.[1] The ICLEI strives to ‘establish an active and committed municipal membership… that promotes environmental and sustainable development initiatives within…[a] framework of decentralised cooperation’.[2] ). In 1993, Subsequent to an ICLEI successful pilot scheme, the Urban CO2 Reduction Project, the CCP program was established during the post-Rio Earth Summit era. The CCP program illustrates itself within local climate policy, as a Transnational governance network.”.

The Asian Development Bank (ADB) and the United Nations Environment Programme (UNEP) are working in partnership with co-funding from the Global Environment Facility (GEF), the governments of Japan and Republic of Korea, and VITO-Flemish Institute for Technological Research NV to pilot a climate technology finance center in Manila, managed by ADB, and a climate technology network secretariat in Bangkok, managed by UNEP. These pilot institutions will directly address key barriers to climate technology transfer and deployment in Asia and the Pacific.

Below is a continuation of the above.