We will bring together young people from around the world and use scientific knowledge to create a "Global Youth Climate Plan".

For more than 20 years, adults have been trying to find a way to avoid dangerous climate change. To this end, they promised to keep global warming below the 2°C threshold. For many countries, including small island states, even 2°C warming is unacceptable because it would threaten their survival. The adults have already been negotiating long before we were even born; nevertheless, there is still no action plan for the necessary emission reductions. The deadline for the weak Kyoto commitments was December 31st, 2012 and the only promise made by governments since then was that they would develop a new treaty, which would become effective in 2020. In the meantime, worldwide CO2 emissions are allowed to rise. We feel cheated!

By now, there is broad scientific consensus that a rise in the global mean temperature above 2°C could lead to disastrous changes in our future living conditions. So that the present generations can live in more comfort, we children will probably have to live on a shattered planet and this prognosis makes us quite nervous. At climate conferences, we, who will have to live on such a future planet, are not given a voice. Therefore, we want to raise our voices in public and urge the world community to take action. We will bring together youth organizations and young people from around the world and use scientific knowledge to create a "Global Youth Climate Plan".

Development of a 10-Point-Plan that outlines how the 2°C limit can still be kept, with suggestions of concrete steps that different actors in society can take.

A Planning Team of global youth as the victims of climate change prepares the plan, based on input from internationally respected research institutes, online discussions and contributions from the broader young public. An Expert Advisory Team advises and supports the young people during this process. The plan is then proposed to political leaders, and it can serve both young and old as strategy for overcoming the climate crisis.

1. Children & youth of Plant-for-the-Planet invite the world's top climate institutes and think tanks to say how the 2°C limit can still be kept.

2. Planning Team and Expert Advisory Team are formed, funds are raised and a coordination office is set up.

3. Planning Team processes the answers of scientists and considers existing similar plans, works out key questions to be answered by the plan.

6. Global Conference of Youth finishes and passes the plan with participation of all world regions.

7. Young delegations visit political leaders of key countries to propose the 10 Point Plan. The news of the Plan spreads around the world through media and social networks.

8. Global Citizens worldwide push for the implementation of the measures described in the Plan in their cities and countries. 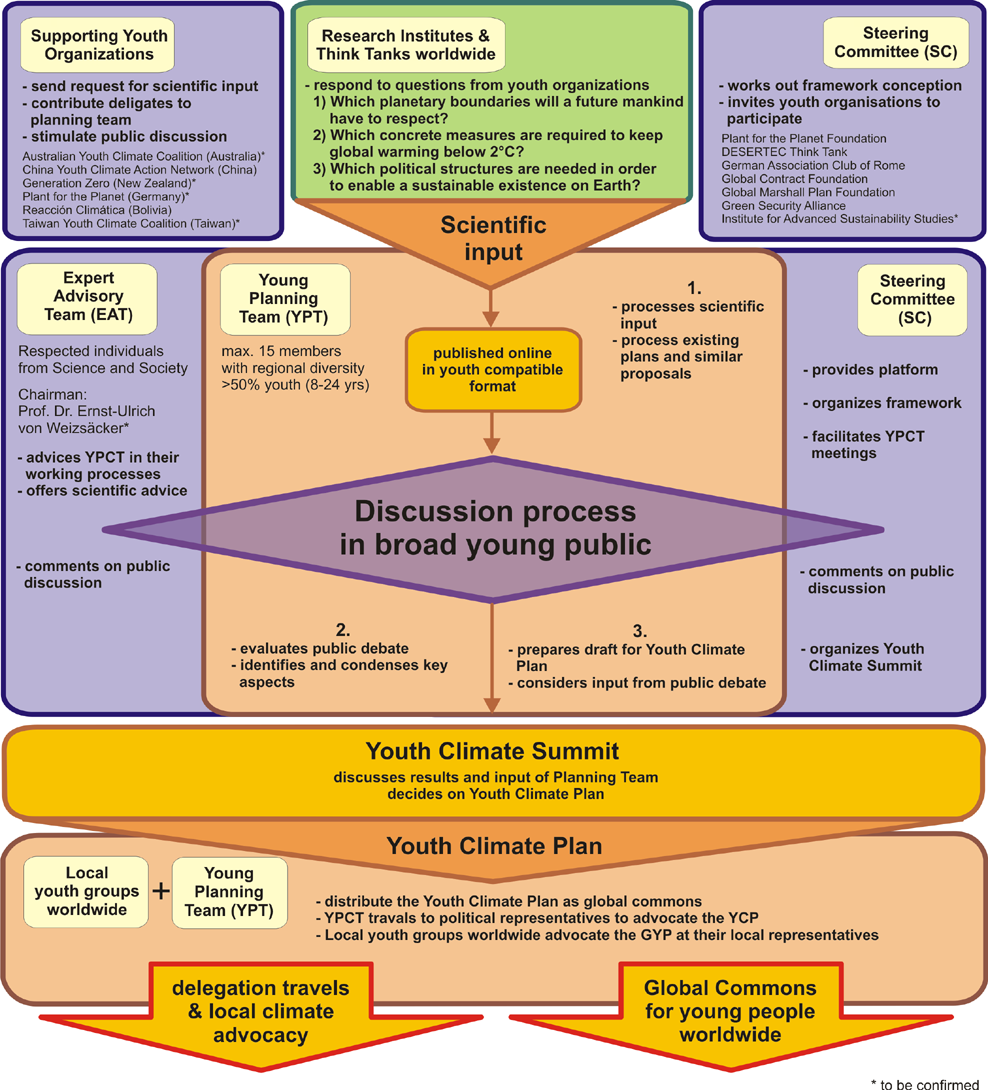 The members of the Plant-for-the-Planet Youth Global Board and 100 active Youth all over the world. By:  Youth Climate Plan
Contest: Youth action on climate change 2014
How can we enable young people to take leadership now, and make a difference against climate change?
Follow on: