This proposal was moved to: Adaptation 2015

The urban water system offers an in situ asset which can be used to address the three primary spacial dimentions of urban heat islands.

To quote Arnfield, A. J. et. al., (sec. 2.3): “..there are many UHIs, displaying different characteristics and controlled by different assemblages of energy exchange processes.”.  Thus, all sustainability efforts can be viewed as being relevant and thus 'coherent' to any plan. We just need to see the synergistic links.

Management: A new form of corporate structure, known as the B Corporation, can provide a flexible legal means for achieving the best management framework. The Board of Directors would reflect the views of the City government.

Funding: This project can use an independent income stream and the revenue potential of off mission activities should be viewed as an important funding tool. In example, site rental fees for  SMES or a server farm can be significant. Also, ice skating or Bocelli Concert on Fresh Pond, during hot summer nights, may be appealing to many.

The B Corp. would be free to engage in such off mission profit opportunities where as a 501 (c3) or city government typically can not go off mission.

STEM: In brief, this early draft is based upon an earlier proposal which was focused upon addressing issues specific to Cambridge Mass. and this current effort will be modified for this specific topic.

Metastrategy: The above  thermal model image can be viewed as an analogy of an idealized UHI effect (the quantifiers in the image are not relevant). As can be seen, the cooler (blue)  advective currents between the warmer (red) convective currents do play a significant roll in the overall thermal dynamics and thus may be used in mitigating UHI specific thermal dynamic flows.

Large ice masses are known to create their own advective currents and the concept of thermal inertia is key to creating the ice sheet.

This protocol also includes the use of BECCS/OHRA/ EEH/OFB, metered misting and other adaptation means. 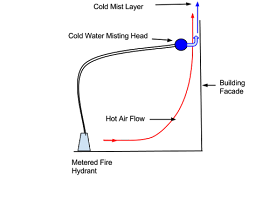 The CHIP will be a joint effort between the City, a locally formed B Corp. (hereafter: The Cambridge Nature Consortium or CNC) and the local civil society groups such as the Climate Protection Action Committee. The social mission of the CNC will be to provide continuing funding for UHI related RD&D and community outreach.

The Cambridge Public Works/Water Dept. will be the frontline oversight authority and the physical resources, provided within the Sullivan Water Treatment Facility, can be of significant value to this plan. In that, simply allowing the CNC to use the discharge water to drive some of the electrical systems, within the ice sheet energy management plant, would offer meaningful energy savings.

Further, a seed fund of approximately $60K, which would support the incorporation of the CNC and preparations for an initial venture fund raising effort, is needed. The City of Cambridge may wish to consider assisting in the securing of the $60K seed capital due to the long term socioeconomic, environmental and overall fund generating potential of the CHIP/CNC for the City.

Also, once established and made prosperous, the CNC can help other local environmental groups achieve their own specific goals.

In brief, the CHIP scenario provides the city environmental leaders with multiple funding paths and an advanced, flexible and effective climate change mitigation and adaptation platform.

1) The Fresh Pond work can increase water filtration at both the volume and type of filtration levels and provides aquathermal based energy utilities near by or city wide.

3) A trail based (underground) biomass/sewage treatment system, based upon the Oxyhydrogen Reaction in Algae (OHRA), can be prototyped with the initial funds.

4) The OHRA method can create large volumes of carbon negative energy (with biochar) from urban sewage nutrients and or the benthic wood dust digesters while producing additional fresh water.

5) Integrating an OHRA/OFB ability within current City infrastructure improvement plans for the trails/roads/water systems is possible and may generate funding support from multiple state/federal agencies.

6) The OHRA method represents a significant climate change mitigation tool at the urban level as well as at the state, federal and global levels.

An initial $60K seed fund, for the CNC organizational expenditures, would be sought with an initial goal of $3M being raised through a first round of CNC stock sales. The value of the total amount of issued stock should be around $10M.

The primary expenditure division would be:

The initial source of earnings of the CNC would be from.. subsurface ..venue rentals. And, an ice sheet surface recreational venue can be managed by current local recreational concerns.

The CNC will need to achieve approximately $3M + in yearly retained earnings to allow for:

Thus, the CNC would become a de-facto climate change mitigation and adaptation RD&D and community outreach funding arm of the city.

It is plausible that this project will generate patents worth significant sums. This type of off-mission revenue stream would significantly enhance the ability of the CNC to fund a wide spectrum of community level environmental adaptation efforts.

An important consideration from the City's perspective is the potential of this aggressive UHI/energy conversion/management effort may create significant weight, in favor of the City, within the Georgetown Challenge.

In brief, the CHIP strategy allows the City to realize a large economic and ecological upside while enjoying minimal economic, environmental or political risks. This scenario is in line with an important global effort.

Thus, such a synergistic management strategy would be a world leading effort.

The above graphic shows the recent radical increase in Arctic methane which can evolve into an Arctic Methane Tipping Point (min 8:15). The reason for the inclusion of this graphics is to illustrate that we have little time, less than many believe, to prepare for a radically different climate.

Also, starting during the winter would expedite this plan as the natural ice sheet can be used for multiple purposes and save significant start-up energy/capital.

4) Deployment of EEH/OFB hybrid energy management retrofit kits, for both commercial and private property, can be developed and sold through the CNC and can be made available within the first 12-18 months.

6) SMES and server farm installations can be operational within 18-24 months (funding dependent).

The above list of actions can be achieved concurrently and within the proposed budget. However, this achievement would require a true fast track commitment at all levels.

In brief, we have a wide spectrum of technologies available to address urban climate change mitigation and adaptation and it is tempting to prioritize such options and work our way through the options in an orderly fashion. That is the 'normal' and 'professional' approach to dealing with a robust list of options.

However, climate change represent an existential threat to our species and life, in general, on this planet. In view of this reality, we do not have the luxury of an abundance of time.

Thus, our best management approach is to fund as many technical options as possible and do so in the shortest time possible.

This logic can not be faulted.

There are multiple CoLab proposals which can be folded into the CHIP framework. Such as:

1) The use of algal/aquaponics for energy/biochar production can be augmented with tree waste supplied by Cantabridgians and the City Tree Warden. The pond floor and trails provides a convenient place for both bio-digesters and dark cultivation of non-sewage based biomass.

2) The bio oil generated through the biotics can be used as fuel for city buildings/vehicles and or feed stock for plastic production such as roof top garden equipment, vertical algal/aquaponics cultivation equipment and other related bioenergy systems. This is similar to "Rethinking the City" proposal.

3) Stockholm is instituting a biochar program which can be replicated. The feed stock for a slow pyrolysis method can be supplied by the City Tree Warden or through the chemosynthisis biomass output.

4) The Direct, Diffuse, and Reflect Heat from Surfaces proposal is similar.

5) Solar cooling & Heat storage is adaptable to the CHIP.

4) The Gas Exchange of Hydrogen-adapted Algae as Followed by Mass Spectrometry.

5) The use of a lake bed as a methane producing bio-digester is a novel idea. The rate of methane production is a relative issue and the below references can help the reader better understand the energy conversion dynamics.

8) Fire Hydrant Metering coupled with simplistic evaporative cooling equipment at the street level. Cambridge's humidity average is on the high side of the envelope for misters (

By:  UHIP
Contest: Urban Heat Island Effect 2015
How can we effectively mitigate the urban heat island effect in Cambridge, Massachusetts?
Follow on: