Easily planning routes using public transport is key to increasing ridership. VAMOS does this in developing countries, where the growth is.

The current transportation model centered on personal internal combustion vehicles is environmentally unsustainable and produces serious social and economic damage. Transport produces 13% of GHG emissions worldwide, consumes over half of the global liquid fossil fuels and generates over 80% of air pollution in cities in developing countries. Transport is also a social justice issue, especially in fast growing countries like India where cars, which serve less than 15% of the population take up 75% of the roads while buses, used by up to 60% of the people occupy a mere 8% of the road area.

The UN projects that world population will grow to 9 billion by 2050, with virtually all of this growth in the emerging economies of Asia, Africa and Latin America. However, many developing countries do not have a sufficiently robust public transport information system for users to conveniently access public transport. In the case of Costa Rica, the initial deployment site for VAMOS, information on bus stop locations, bus routes or schedules is not publicly available. Because the bus is the backbone of the public transport system this makes the system as a whole very difficult to use, especially for new users. The urgent need to resolve this situation is clearly identified in the National Transport Plan designed by the Ministry of Transport and Public Works.

VAMOS will tap into the power of crowdsourced data from mobile phone users to map existing public transport infrastructure and provide a real time picture of conditions in the system allowing users to plan their routes using a variety of public transport modes.  The information gathered will also be processed and analyzed to provide feedback to transport operators and regulators to optimize current use and improve the planning of future expansions. Once the pilot implementation is fully operational we will develop a Replication Kit with documentation to facilitate the implementation of VAMOS in other countries.

The development of potential initiatives to promote sustainable urban transport must be undertaken through a framework which allows a structured approach while maintaining the necessary flexibility to adapt to local circumstances. The Avoid-Shift-Improve (A-S-I) approach developed by the German Development Cooperation Agency GIZ  is one such framework. By focusing initially on Avoiding (or reducing) the need to travel wherever possible the A-S-I approach aims to promote system efficiency through initiatives linked with land-use planning and demand management. Medium-to-high density urban development and telepresence (telecommuting, e-government, etc) all play an important role in allowing access to opportunities with the minimum amount of transport possible. For those trips which are inevitable Shift instruments seek to promote trip efficiency by shifting demand from the most energy consuming mode (cars) towards more sustainable modes. Of especial interest is the promotion of a shift towards non-mechanical and public transport options. Finally, the Improve component focuses on improving vehicle efficiency through the use of vehicle-specific technologies, fuel-standards and alternative energy sources.By applying the A-S-I Model to the accessibility perspective it is possible to identify key initiatives to promote sustainable urban transport systems.

VAMOS sits squarely in the “Shift” component of the A-S-I Model by addressing the lowest-hanging-fruit amongst the identified barriers to use of sustainable transport in developing countries: the availability of information to plan a route using public transport. By leveraging the increasing availability of smart phones as both information display devices and crowdsourced data gathering sensors VAMOS aims to increase the use of multi-modal public transport -initially in Costa Rica, but explicitly implementing design and architecture elements to facilitate replication in other countries- while simultaneously gather large data sets that could be used to model and improve existing and future transport infrastructure. 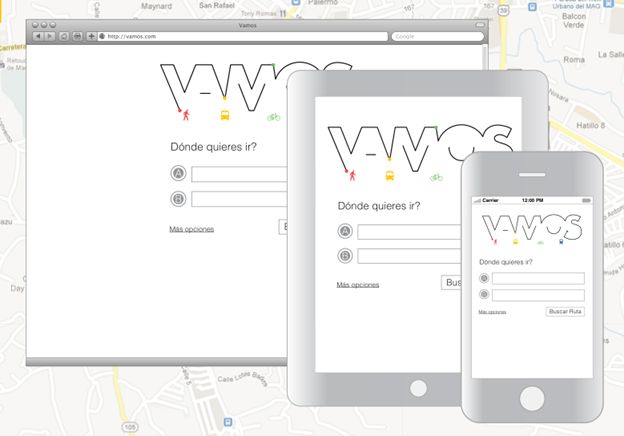 Project Activities and Methodology:
This project is mainly focused on the development of a tool for the general public to have access to ever changing public route transportation system. Therefore much of the project activities and methodologies revolve around the implementation of such system.

The following are the pre-development project activities:

The following are the development project activities:

The development activities will be approach using a widely known development methodology called: Agile-Scrum Development, which will be explained below. Also the necessity of having a great user experience derives in the use of Strong User Experience Practices.

Agile methodology is an approach to project management used in software development. It is the software development methodology chosen because it helps teams respond to the unpredictability of building software through incremental, iterative work (sprints). At the end of each sprint there is an expected and measurable amount of work to be reviewed. For each sprint the work expected is defined in a set of User Stories to be completed and for each User Story the acceptance criteria had been predetermined.

These User Stories are created based on rigorous user data which has been acquired from Contextual Interviews, Surveys and Body Storming exercises. Each of these User Stories is translated into wire-frames and behavior notes by our User Experience Designer which are then skinned by our graphic designer and implemented by our developers. This implementation is then tested for completion by our product owner and subsequently for satisfaction with our beta testers.

Our methodology is iterative and incremental meaning software is developed in modular components and each component is tested and improved upon. In an agile paradigm, every aspect of development — requirements, design, etc. — is continually revisited throughout the lifecycle. At the end of each sprint, stakeholders and team members meet to assess the progress of a project and plan its next steps. When a team stops and re-evaluates the direction of a project every two weeks, there’s always time to steer it in another direction. The results of this “inspect-and-adapt” approach to development greatly reduce both development costs and time to market. Because a team’s work cycle is limited to two weeks, it gives stakeholders recurring opportunities to calibrate releases for success in the real world. In essence, it could be said that the agile development methodology helps companies build the right product.

FUPER is a non-governmental non-profit organization focused on promoting scientific thinking, data-driven decision making and citizen activism as the basis of low-emissions development, climate resilience and a generally sustainable society. FUPER is an inter-disciplinary endeavor that brings together the arts, science, humanities and technology in its approach to every project. In 2012 FUPER launched SW!CH 12-21 as a series of events to promote a civil-society commitment to support the national goal of making Costa Rica Carbon Neutral by 2021. FUPER is also leading the development of projects relating to sustainable transport, smart grid and supporting the development of the National Climate Change Metrics System.

VAMOS is currently being developed for pilot implementation in Costa Rica, but it is explicitly designed to be replicated throughout the world.

The limited data currently available makes accurate estimation of the potential GHG reductions from the implementation of VAMOS very difficult. However, mobile combustion for terrestrial transport is the single largest element of Costa Rica’s carbon footprint, emitting over 3,800 million tCO2e in 2005. Of these, 48% are generated by personal vehicles which serve about 25% of the population while public transportation, which serves as the main motorized mode of transportation for the other 75% of the population, accounts for only 9% of GHG emissions.

A recent report by the UK Department for International Development puts it bluntly:

“Implementing climate change mitigation measures in the transport sector will contribute to the economic and social progress of developing nations by creating new jobs, healthier environments and enhanced mobility, and will reduce the vulnerability of poor people to anthropogenic climate change impacts.”

There is also a strong tendency for a negative correlation between sustainable urban transport and obesity rates, as reproduced in Figure 9 below;

The implementation of the Guanghzou BRT doubled the amount of people who feel safe walking around the area while a study of the pedestrianisation of the Khao San Road in Bangkok found that 85% of retailers agreed with the project after it was implemented and 47% reported increased sales. Congestion is also notably reduced for all road users. These are just a few examples of the less-than-obvious advantages of a sustainable urban transport system.

VAMOS is currently being developed as a volunteer effort under the auspices of the Fundación Pro Energías Renovables FUPER . Funding levels will directly affect time to market, feature release times and growth rate.

A total budget of $250,000 over two years would allow for development of full Android and iOS applications (V1 – V3), an initial Integrated Transit Analysis Platform and the creation of a Replication Kit to support implementation in other countries. Funds would be used mostly to hire additional staff to accelerate the development process and pay for necessary servers and bandwith for the app operation.

The following delivery estimates assume a sufficient level of funding:

Kumar, Santosh and Ross, WIlliam - Effects of Pedestrianisation on the Commercial and Retail Areas: Study in Kha San Road, Bangkok

By:  FUPER
Contest: Transportation 2014
How can CO2 emissions from the transportation sector be reduced?
Follow on: