Implementation of climate strategy at Municipal level by empowering and training local actors with focus on agriculture and water resources.

The main objective of this project is to create and implement in the municipal territory (county) of Santa Barbara de Heredia in Costa Rica, a participatory strategy of adaptation to climate change with a focus on agriculture and water resources.

Despite the important international and national efforts for the adaptation and vulnerability reduction caused by the effects of climate change, each of these efforts will positively impact only if they are transferred effectively at the local level.

This municipal strategy is fundamental for the integration of efforts that otherwise will leave actions uncovered, resulting in an adaptation process slower, less effective and more expensive. At the end of this project we expected to have an inter-institutional commission formed, organized, trained and empowered for decision-making and taking action to make this local territory more resilient to the effects of climate variability and change.  Beside the concerted climate strategy, we expect to create risk management plans at the district level and a technological application for early alerts.

Why farmers and water suppliers?

We focus our efforts on the agriculture and water resource actors given their key role in the local dynamics of production and their high level of exposure to climate risks. Furthermore, both sectors are intrinsically connected, whereas water use (e.g., drinking and irrigation) and water pollution (e.g., agrochemicals, soil sedimentation) are urgent aspects to address under new climate regimes. On one side agricultural practices significantly influence water quality and quantity, and on the other side, farmers are dependent on water for their activities. 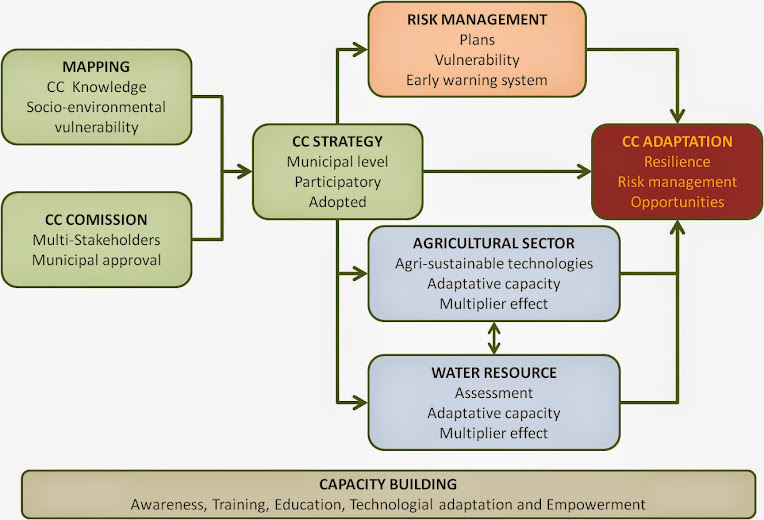 During the whole process we intent to build in local governance, agricultural, and water stakeholders capacities through education and training in order to empower them for decision-making, increasing climate change resilience. As we mentioned before, several of our actions will take place simultaneously.

STEP I: Creation of a participatory and concerted municipal climate change strategy

Our first step aims at understanding the situation in the municipal territory. This includes an assessment of socioeconomic, political, and environmental characteristics, including key actors. Furthermore, we´ll study the level of public knowledge and familiarity with the topic of climate change and its potential risks. How? With the aid of workshops, social mapping, interviews, focus works, surveys, GIS, and the revisions of secondary information.

The development of a municipal climate change strategy will be developed, executed and monitored by an inter-institutional commission. Members of this commission will function as representatives from the multiple sectors, districts, and businesses within the municipal territory. How? Key actors, including individuals, organized groups, local government, and businesses will be invited to participate in a series of meetings and educational workshops in order to sensitize, inform, and train them about the need of a concerted climate change strategy. This commission will lead the development of the strategy with the support from our team, including the development of general local climate policies and main areas for actions.

STEP II: Development of risk management plans at the district level through a multi-stakeholder approach

Maps of risk perception will be made with projections and scenarios considering future national and local climate scenarios. Through this process risk management plans for each of the districts are developed in a participatory form considering the views and perceptions from organized groups, institutions, private sector, local development associations, producer associations, and other key actors at the district level.  How? Workshops, meetings, GIS analyzes, and probably other activities will take place in each district to assess their vulnerability to the risks of climate change and the local perceptions around these risks.

With the aim to prevent or manage emergencies caused by climate related events, we intend to make accessible a system/application for early warnings considering information about the current resilience and potential climate change risks of each district. How? Once the individuals’ perceptions are evaluated along with biophysical and climate characteristics, we hope to hire a computer expert to help us develop an application for use in phones, tables and PCs. It might be that we input our information into other systems that currently exists (something yet to be defined).

For the agricultural sector we expected to implement at the local context technologies and practices aligned with agroecological principles aim to make more resilient the biological, socio-cultural and economic systems. Among these practices are: use of traditional knowledge, organic fertilizers and biological pest control, establishment of local seed banks, rotating crops and multi-cropping, agroforestry production, composting, efficient irrigation, water reservoirs, biodigestors, constructed wetlands, etc. More specifically for our study area we propose:

a. Increased diversification of production systems especially coffee, with the introduction of forest trees of multiple-use and fruit trees. This provides stability and resilience capacity to production systems on one hand, and on the other hand, it expands the supply of agricultural products giving greater economic stability to the system itself.

b. Using controlled environments (e.g., greenhouses) for the production of horticultural crops that are more sensitive to fluctuations, particularly to rainfall patterns.

c. Because there are already sites with limitations of water for irrigation for agriculture, we hope to implement as a common practice the use of open-field water collectors.

d. Reforestation with native species in those areas according to the capacity of land-use and hazard ratios is a priority, this in order to control potential floods and protect the soil from rain and wind erosion.

e. In connection with the production of dairy farming, incorporating trees, shrubs and forage in areas near water resources is important for their protection. With these actions, the impacts on water bodies are reduced, land use is optimized, and the protein for livestock feed increases. This in turn may stimulate the abandonment of areas currently not optimal for livestock production.

Besides the work with farmers, working with water suppliers is imperative given the increasing demand for water and the challenging rain projections. Our goal with this target group is to implement a program to increase their operational capacities to deal with socio-economic and climate change related pressures.

a. First we´ll conduct an assessment of management practices and risks faced by water operators in the municipal territory, including the municipal aqueduct and other community organized water suppliers. The goal is to understand how water suppliers are performing regarding consumer satisfaction, conflicts for water use, risks management, public health (i.e., potable) and environmental management (e.g., protection of water springs).

b. Depending on the specific situations, we hope to implement a variety of projects such as reforestation or protection around water springs, assessment of pipe leaks, implement a testing program for water flows and aquifer levels, adopting sanitation equipment.

c. The above two main activities will be complemented with an educational campaign to users about water conservation practices.

In order to approach both farmers and water suppliers, we first intend to map the key actors with interviews with personnel from the National Water Institute, the Ministry of Agriculture, the local development association, and other key organizations as needed. After a general list is created, we´ll set up visits with key actors in order to explain the project, ask their participation, and obtain additional information about their climate related challenges. Furthermore, key actors from these two groups are invited to participate in the municipal Climate Change Commission, a necessary step to create a concerted approach.  Furthermore, an educational and training program is intended to all voluntary participants aimed at building their capacities and empowering them for decision-making to help increase climate change resilience.

We recognize that their active participation is fundamental for the development and execution of specific strategies; therefore, we expect a high level of participation. For example, the municipal Climate Change Commission requires these two groups (farmers and water managers) to develop specific and synergetic climate strategies for their sectors. Since offering free support usually fails in development strategies, we consider necessary that those actors involved first go through an educational and training process before any investments are made.

The coordinating team is formed by experts from the National University of Costa Rica; however, a closely coordinated effort is expected with the Municipality of Santa Barbara of Heredia, and multiple stakeholders within this county.

The coordinating team is multidisciplinary including forest managers, chemical engineer, water engineer, sociologists, economist, all with experience on development projects and with climate change background.

Other key actors are the Ministry of the Environment, the Ministry of Agriculture, the National Water Institute, and key local associations and businesses. All these organizations we´ll be mapped and approached according to the proposed goals of the project.

These actions will take place in the county of Santa Barbara of Heredia, in Costa Rica. Our goal is to development a solid strategy with educational materials and tools, for replication in many of the other 80 municipalities of Costa Rica. Our proposed approach could be later applied to local governments worldwide, considering its own biophysical and socio-economic systems, and climate change risks, in order to build more resilient local landscapes.

We are estimating a $500 000 total cost for the implementation of the project for the 3 year period. Half of this amount could be a counterpart funding from the National University of Costa Rica and the Municipality of Santa Barbara.

The resources obtained from Climate CoLab prize will be used to further detail the proposal and apply to funding organizations to obtain the budget necessary for its execution.

We hope to implement this project within the following 3 years in an overlapping process that includes the formation of the municipal climate change commission, and the work with farmer and water operators.

A detailed analysis of the project will be developed afterwards in order to refine the model and create a solid case for implementation in the rest of the municipalities of Costa Rica within the next decade.

By:  UNA Team
Contest: Adaptation to Climate Change 2014
What can be done to adapt to the impacts of climate change?
Follow on: