Humanity must adapt to sea level rise, increasing storm intensity, ocean acidification, ocean hypoxia, disruptions of the ocean nitrogen cycle, droughts, floods, seawater intrusion into coastal and island fresh water aquifers, etc.  The typical seawall is intrusive all the time, but needed only rarely, and addresses only sea level rise.  Most damage from pre-2100 sea level rise will be from storm waves and storm surge coinciding with high tide or from tsunamis.  The two different kinds of waves require two different kinds of multi-adapting invisible seawalls:

1.     Wind-driven surface waves can be controlled with a flexible reef (FlexReef) because their wave period is generally shorter than 20 seconds.  The FlexReef can be raised or lowered during the day to adjust for changing sea-level due to tides and storm surge.  FlexReef is normally invisible to people and waves unless adjusted for better surfing on holidays and weekends.  The amount of passing wave energy can be adjusted to accumulate beach sand, like fixed artificial reefs, or for perfect calm during storms.  FlexReef works by tuning the mass of entrained water, the added mass of water on the components, and the spatial nature of wave energy. FlexReef’s calm water allows floating or elevated homes, businesses, beaches, and wetlands to survive storms undamaged.

2.     Tsunami wave periods are several minutes long, requiring a solid barrier, like the invisible tsunami wall (TsunamiWall).  The Tsunami wall dissipates and redirects energy from tsunamis in deep water.  (A tsunami which is 1 meter high on the open ocean would be 3 meters high when the water is 50 meters deep or 8 meters high when the water is 1 meter deep.)  The top of the TsunamiWall may be lowered to allow ship passage or raised for additional mitigation. 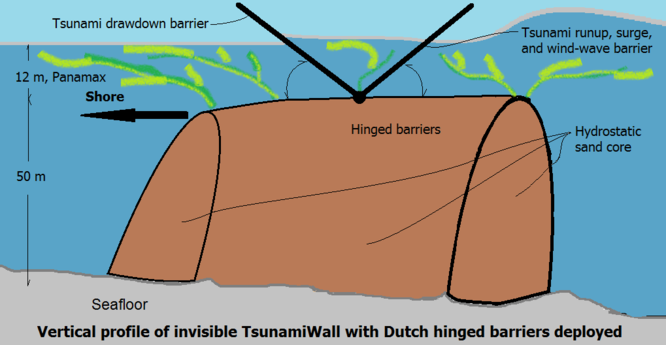 Both FlexReef and TsunamiWall would have built-in systems supporting the growth of seaweed or coral for marine agronomy, ocean forestry, nutrient remediation, and eco-tourism.

The FlexReef must be stiff for wave periods faster than about 30 seconds.  Its flexibility is slow, a couple hours to change 40 meters of water depth.  The construction could be a 50 meter wide concrete slab (with holes) that acts as an artificial seafloor.  Or it could be mostly tensioned fabrics with 200 meter width (perpendicular to shore).   Testing many concepts with CFD will allow us to show economic feasibility relatively inexpensively.

Mark Capron (an Ocean Forester with PODenergy, Inc.) has filed a provisional patent application (PPA) in much more detail should some components be new inventions.  PPA status allows non-confidential sharing of these concepts while preserving the option for individuals and organizations to acquire an exclusive right to sell the associated products.

Consider the potential for sea life habitat, teaching, eco-tourism, and human food by increasing the kelp and other seaweed forests off the coast of California or other coasts.  Both FlexReef and TsunamiWall can incorporate materials that seaweed or coral will attach to plus means to distribute nutrients, and flex to improve harvesting efficiencies.  For example the web of FlexReef can double as a flexible surface for an oyster or abalone farm.  The entire farm could be raised to “snorkeler depths” for “harvest your own” days.

The structure can also include real-time maintenance and scientific information gathering via power and instrumentation cables extended to shore.  School children could view and harvest sea life by controlling an ROV over the internet.

We believe that these structures provide structural opportunities to support Marine Agronomy and Ocean Forestry.  Because of the fast growth of seaweed, it is possible to grow and harvest seaweed between storm seasons for additional income.

5.     Include Ocean-healing Development goals in all national research plans.

Action 1 could start with the California Coastal Commission and similar coastal agencies at other states.

The funding agencies may prefer to retain universities, many of which are developing CFD models.  For example, the 2014 Orville T. Magoon Sustainable Coasts Award was given to Dr. Joannes J.A. Westerink at the University of Notre Dame for developing CFD to predict storm surge. 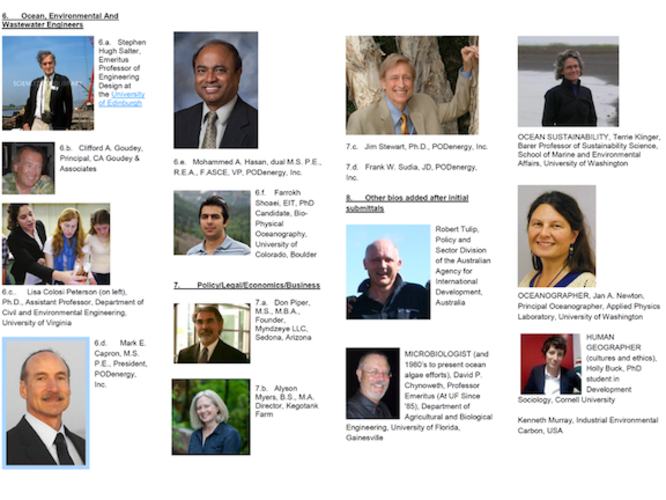 Action 2 is continued by the California Coastal Commission and similar coastal agencies at other states or private investors.

The final design and construction of prototypes might best be accomplished by construction firms with substantial ocean and coastal experience in collaboration with the Ocean Foresters.  Such firms include: Technip, Fluor, and Bechtel.

Action 3 is the Ocean Foresters establishing businesses to operate and maintain FlexReef and TsunamiWall as biodiversity increasing farms and forests.

Action 1 is initiated at U.S. coastal states and their universities.

Action 3 is built into the artificial reefs.

Safe coasts while adapting to sea level rise.  If there are no waves, only high winds, rain, and a calm flood, people can float or waterproof their infrastructure.  The floating infrastructure can be expanded such that whole cities are floating by 2200.

Wetlands could continue to function over a larger range of elevations.

Water – Fresh water is a major benefit.  The invisible structures are platforms for Marine Agronomy.  Marine agronomy produces virtual freshwater.  The benefits are similar to irrigating farms by desalting vast volumes of seawater (without the energy use and concentrated brine disposal).  Most freshwater (70-80%) is used to grow food, a fact which has placed negative connotations on “virtual water.”  Freshwater grown food is also the primary driver for conflicts, migrations, river diversions, groundwater overdraft, coastal deadzones, etc.

Estimating, prior to CFD refinements, suggests each meter of length along the shore costs about $20 million per kilometer of shore length for either FlexReef or TsunamiWall (without the hinged barriers).

But the cost might be considered zero for some locations.  Insurance companies will be raising rates for unprotected coastal structures.  (The U.S. Government is already phasing out subsidies.)  Therefore money could flow to either pay for damages after storms or pay to prevent damage via FlexReefs.

Also, it may be possible for the businesses created by growing sea life on the structures to partially cover their cost.

Costs appear competitive with fixed reef systems, but more expensive than growing coral (if coral keeps growing in the warming and acidic ocean).  Filippo Ferrario et. al. “The effectiveness of coral reefs for coastal hazard risk reduction and adaptation” Nature Communications, May 2014 are quoted in a Stanford University newsletter, “…the authors report that the median cost for building artificial breakwaters is $19,791 per meter (along the shore), compared to $1,290 per meter for coral restoration projects. Restored reefs could reduce wave energy immediately, becoming more valuable through the years as they grow, keeping pace with rising sea levels.”

The time line depends on the funding:

4 years for CFD and installation of a prototype.

2 years to observe the prototype, calibrate the CFD, and assess the sea life growing features.

2 decades to install systems (starting with the highest insurance need) that will provide protection, food, and jobs through several centuries of sea level rise.

Contact Professional Engineer Mark Capron for a copy of the detailed PPA and for consultation on implementation.

By:  Ocean Foresters
Contest: Adaptation to Climate Change 2014
What can be done to adapt to the impacts of climate change?
Follow on: